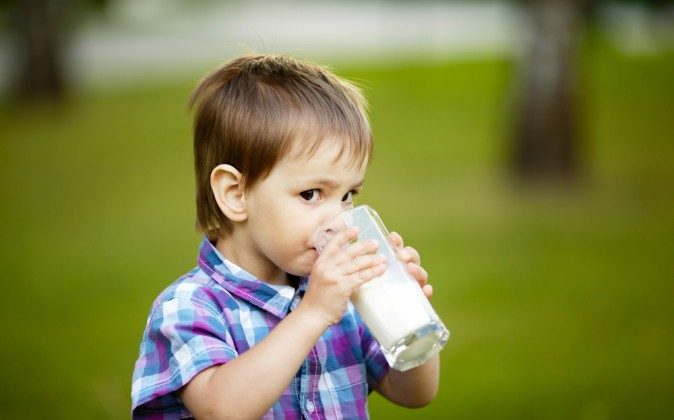 Children consume more milk than adults, and in the U.S. many dairy cows are given the genetically engineered bovine growth hormone (rbGH) and fed diets of GMO grains (corn and soy).(Shutterstock*)
Fitness & Nutrition

For the past couple of years, an excerpt from advocate and activist Jeffrey M. Smith’s book about the dangers genetically modified (GMO) foods pose to children has circulated virally on the internet. Taken from the book titled, Genetic Roulette: The Documented Health Risks of Genetically Engineered Foods

, the excerpt discusses how children are more vulnerable to the effects of GMOs. There are three main dangers of GMOs mentioned in the article:

1. Nutritional changes impact children more because their bodies convert more of the food they eat “to build organs and tissues,” but adults convert more food “to energy and store this as fat.” Smith mentions the UK Royal Society which said that genetic modification “could lead to unpredicted harmful changes in the nutritional state of foods.”

[Infographic] The 8 Most Common GMO Foods

2. Children are more susceptible to allergies than adults, with infants having the “highest incidence of reactions, especially to new allergens encountered in the diet.” Much smaller doses of toxins can cause reactions in children, and normal development can be “severely affected” by exposure to hormones and endocrine disruptors.

A 2003 article by University of Minnesota’s Division of Environmental Health Sciences discusses the “potential health effects” of GMOs, including the rise of new allergens. Food allergies, according to the article, affect about five percent of children and two percent of adults in the U.S. Allergic reactions are caused when a protein enters the body and an immune response is stimulated. “If the novel protein in a GM food comes from a source that is know to cause allergies in humans or a source that has never been consumed as human food, the concern that the protein could elicit an immune response in humans increases,” the article states.

The article mentions other potential health affects of GMOs, namely increased toxicity, decreased and antibiotic resistance. Some are concerned that inserting an “exotic gene” into a plant could cause it to produce higher levels of toxins that could be dangerous. Others are concerned that a GMO plant could “theoretically have lower nutritional quality than its traditional counterpart by making nutrients unavailable or indigestible to humans.”

The American Academy of Environmental Medicine states that GMO foods “pose a serious health risk in the areas of toxicology, allergy and immune function, reproductive health, and metabolic, physiologic and genetic health and are without benefit.”

What can a concerned parent do to protect their children from GMOs? Buy organic foods, preferably certified organic options, which do not allow organic foods to be grown from GMO seeds.