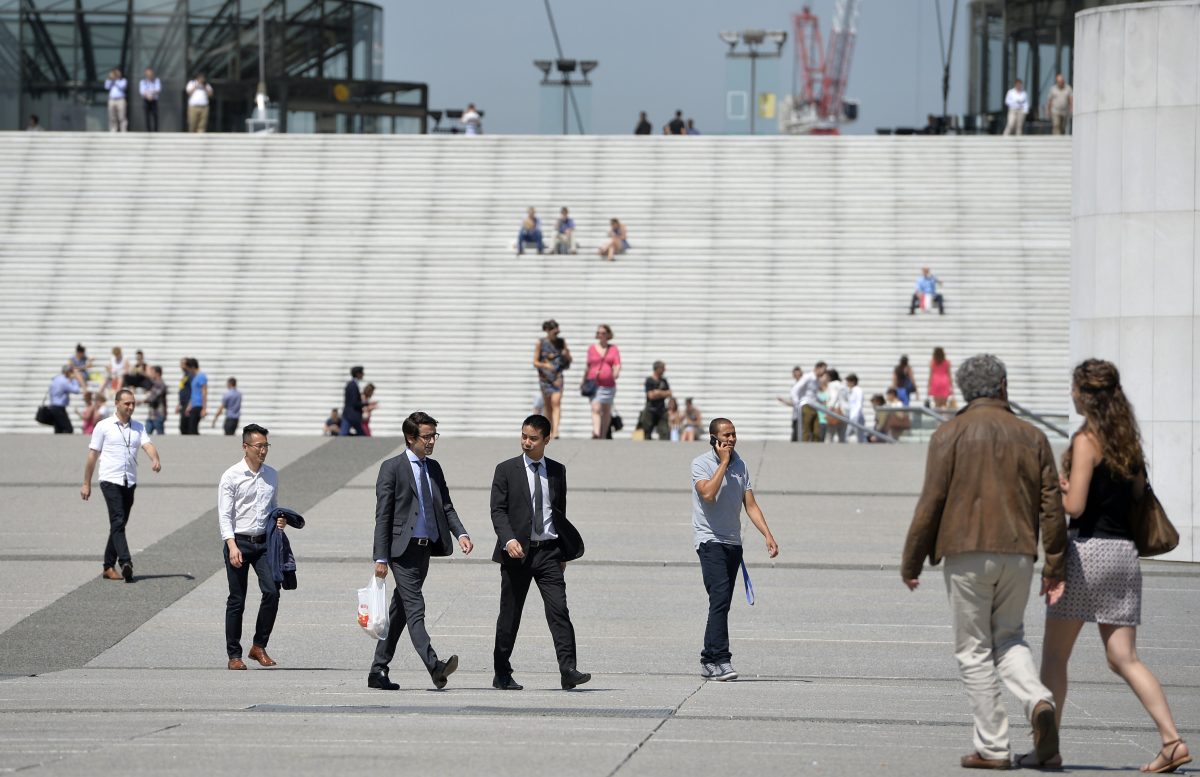 People walk at La Defense business district, outsisde Paris, on July 17, 2014. 48% of the French people say they are pessimistic about their own future, even though their country has a good index of global development. (Miguel Medina/AFP/Getty Images)
People

Are French People Champions of Doubt and Pessimism?

PARIS—Could the French people be « happy being unhappy », as suggested by The New Yorker?  Half truth, half mystery, the French melancholy surprises, makes one ponder, and amuses too.  According to the latest studies, French people really deserve their reputation of confirmed naggers, supporters of doubt, and the “no” that goes along.  Some experts, historians, and sociologists say French people are simply unable to project themselves. Some even recognize this as a cultural trait.

More Pessimistic Than the Palestinians

Is the French mood as gray as the autumn skies above Paris? According to the study which the American Institute ‘Pew Research Center’ published last week, 48% of the interrogated people think that the economical situation of the country is going to worsen in the following twelve months. This means the French people are bleaker than the Lebanese or the Palestinian people. Only the Greeks are worse, with a result of 53% of pessimistic answers.

Still, this result contrasts with the index of national development. Even though they have access to free health care, have savings – 43% of the French people are saving money – , and a rather good quality of life, French people paint everything black. According to another study by the French office Free Thinking, 47% of the interrogated people fear to grow older in undignified conditions, and 72% think their children’s lives will be worse than theirs.

The French Education, Symptom of Our Fears

According to several observers, the French education system would be a good example of how fear and doubt can penetrate French society. A study by the International Program for the Follow up of Students Experiences shows, that contrarily to other European countries, the French students hesitate to ask questions during class, and retain themselves from answering questions as much as possible.

“This reluctance to take the risk of giving a wrong answer, reveals their fear to see their mistakes stigmatized” explained Oliver Rey, researcher for the French Institute of Education. “Here we find a major characteristic of our educational system. Instead of relying on students’ errors, the teacher sees them as mistakes, and punishes them as such.”

The French educational system has preserved the same cultural basis as in the 70s, when it was reformed. This hasn’t had the best effect on students. According to Olivier Galland, “the goal of a school is to select the best ones through scoring, ranking, and competition, creating a climate of fear. The students know that their future social status depends on their academic achievements. Thus, they have a feeling of jeopardizing their school life, and are in panic of being eliminated. This is not at all the case in the Scandinavian countries.”

“A Civilization of Doubt and Critical Spirit”

From a broader perspective, the theory of decline has more or less always existed in France, first with General De Gaulle, later during the Mitterand era. This French tendency to bleakness has been observed particularly in the 70s, with the arrival of the first national surveys. The historian Christophe Prochasson refuses to define characteristics of the French individual.  But we can identify with his experiences of communities, political traditions, or historical imaginary fields that explain, at some point, representations of a collective group.

Claudia Senik, teacher at the Economy School of Paris, has observed that French expatriates have the tendency to answer the surveys on wellbeing as negatively as their counterparts from the mainland. This characteristic is not shared with Canadian or French speaking people in general. During an interview with Nouvel Observateur, she explained: “The smiling American people are often mocked with their “Great! Wonderful!”, because we are a civilization of doubt and critical spirit. French people have a certain pride to keep a certain distance with things – a way of saying: “I don’t buy that.”

Throughout history, we can see a French tradition dating from the time of Descartes. The French philosopher René Descartes preferred to doubt absolutely, than to assert something and make a mistake. Jack the Fatalist, Denis Diderot’s hero, perceived that “everything, good or bad, that happens to us was written above”. The poet Charles Baudelaire paved a way for his depression by permeating the arts and their perception during the following decades. Traces of this cultural doubt can also be found in French human sciences, literature, sociology, and politics.

But, it is difficult to accurately identify the sources of this cultural trait. It is not absolute, and it also cannot fully summarize an entire population. The French citizens cannot be totally assimilated to grumpy Gallic people. This would be too much of a stereotype, and too far from reality. Economic and social developments are also able to improve these representations. “Identity is not an eternal and inescapable fact, it is dynamic and complex,” concluded Christophe Prochasson.