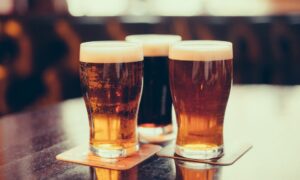 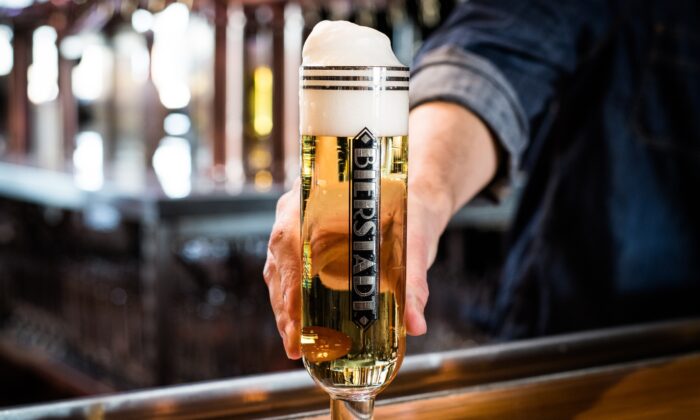 Thirsty drinkers expect quick service, and a fast and efficient bartender keeps customers happy. But if you’ve ever watched a Guinness pour, you know that some beers cannot, and should not, be rushed into the glass. Germans think so, too, and it may come as a surprise to some that they’ve long applied this approach to our most common beer: the pilsner. In the United States, some craft breweries are taking up the technique.

With all the variations of styles and ingredients that have been paraded before us by this golden age of craft beer, it’s nice to see some respect for the tried and true beer of beers. But the variation here is not in the style of beer itself, but rather the method of delivery: the slow pour. The name says it all: Your beer is poured in several intervals, creating a dense head that climbs out of the glass and stays there.

Is this taproom theater, or is there a point to all of this?

Proof in the Pour

In regards to theater, beer and food do benefit from presentation—think plating gourmet meals versus throwing a burger and fries into a greasy paper bag. But there is more to this than show.

The slow pour changes the flavor. In Germany, the beer is served chilled but not ice-forming-on-the-taps cold. The bit of warming from this longer process allows your taste buds to taste more flavors; ice-cold beer hides flavors (and flaws). The foaming process reduces the bite of carbonation as well, making the beer smoother while also rounding the edge off the hoppy bitterness, allowing more brightness through. The stable, lingering head also traps more of the hop aromatics that would have otherwise drifted off sooner in a typical pour.

“I first heard of it from Bierstadt Lagerhaus,” said Lohman. The Denver-based brewer is faithful to producing traditional lagers according to Reinheitsgebot, the German beer purity law. “They are in my mind the pioneers of it in the United States.”

Working Draft Beer does frequent collaboration brews, and each year they brew one specifically for the Great Taste of the Midwest, Madison’s esteemed beer festival. This year they worked with Minneapolis’ Fair State Brewing Cooperative, whose head brewer, Niko Tonks, had collaborated with Bierstadt on a beer recently. “Fair State brews a lot of lager beer, and we thought, ‘Let’s do a pilsner and go the extra mile and serve it slow pour-style.’”

The actual brewing process demands nothing unusual, other than perhaps focusing on having good head retention, which as Lohman points out is something every brewer making Euro lager should be focusing on anyway.

“Head retention and foam is very important to the presentation of beer, specifically [in] Germany,” he said. “If your beer doesn’t have good foam, that’s seen as an indicator of poor beer.” The slow pour process is a way of showing off the head. “The whole idea is to have this muffin top of foam.”

“The tricky part of it,” said Lohman, “is you have to manage customer expectations with it, and let people know they’re not going to get this beer for five, 10 minutes after they order it. In a world full of people who want things fast, that can be tricky and cumbersome.” By the end of this interview, my beer was nearly ready.

Bierstadt Lagerhaus, of course, brews a pilsner. “It’s absolutely exceptional, perfect. Probably the best stateside example of a German pils,” said Lohman. It’s name? Slow-Pour Pils. And this is an important point: A slow pour is merely a style of serving, rather than a style of beer. So if we’re being technical, and we are, a Slow-Pour Pils is the brand name of a beer made by Bierstadt that is also served as a slow pour.

If you’re not in Denver or Madison, worry not. Coppertail Brewing in Tampa, Florida, has promoted the slow pour for their Independent Pilsner, and Victory Brewing of Downingtown, Pennsylvania, has encouraged the same for their highly regarded Prima Pils. But you can just as well do it at home, or ask a friendly bartender if they have the time.

Before you even get started, be sure to use the proper glassware: A tall, narrow glass is best suited for a pilsner, especially in this particular instance.

Unlike the common tilt-the-glass approach to avoid an overflow of foam, a slow-poured pilsner goes straight into the bottom of the glass to encourage it to foam up. Fill the glass without letting the head go over the lip. Give it a few minutes for the foam to dissipate, then repeat that straight pour so that the foam rises again to the top of the glass. Again, let it settle. Depending on the size of your glass, you might even do this a third time. Then top off the beer carefully, allowing the head, which is now quite condensed, like cappuccino foam or almost meringue, to rise above the lip of the glass. This whole process is going to take a few minutes.

Worth the wait? I say yes. What’s the rush? Slow down and enjoy the beer.