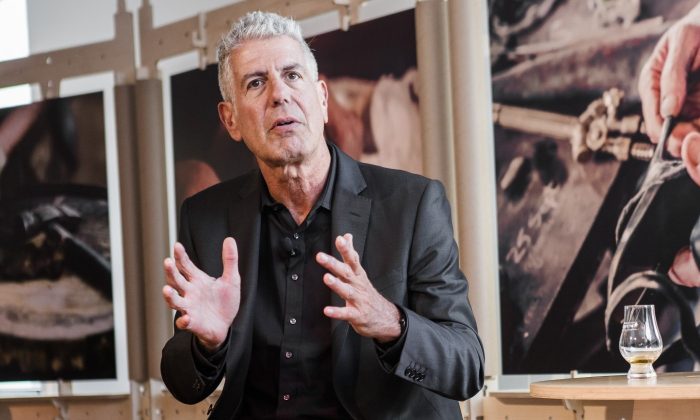 Host of CNN’s “Parts Unknown” and chef Anthony Bourdain at the launch of his traveling exhibit, “Raw Craft,” at the Hudson Mercantile in midtown Manhattan. (Samira Bouaou/Epoch Times)
Food & Dining

Anthony Bourdain Will ‘Never’ Eat This One Food That You Eat

The man who has eaten nearly everything, who tries any food even once, will not eat one dish that American regularly consume.

Celebrity chef and traveler, Anthony Bourdain, the host of CNN’s “Parts Unknown,” has been known to “try anything.” While he may avoid salads and greens in a town with poor water treatment facilities, Bourdain doesn’t shy away from a “busy street stall serving mystery meat.”

Yet in a May 9 interview with Bon Appetit, Anthony Bourdain revealed the one food he will not eat: airplane food.

Bourdain “never” consumes the stand-up comics’ classic whipping boy. “No one has ever felt better after eating plane food,” explains Bourdain “I think people only eat it because they’re bored. I don’t eat on planes. I like to arrive hungry.”

Surely a long flight will tempt Bourdain into swallowing some vacuum-packed morsels at 35,000 feet. Not even on Qantas’ 16 hour 55 minute direct service from Dubai, UAE to Auckland, New Zealand? (The world’s longest non-stop flight, according to the BBC.)

“I’d order cheese” replied Bourdain “and a [expletive] load of port. I’d eat some cheese and drink myself stupid.”

And the one food Bourdain can never reject?

“Show me a bowl of spicy noodles, and I’m all over it.”

Bourdain recommended Beirut, Lebanon as the top travel hotspot of the moment.

“The food’s delicious, the people are awesome. It’s a party town. And everything wrong with the world is there” notes Bourdain. “The seafood restaurants by the shore. Fast-food shwarma. Smoke some shisha. Go to a nightclub. It’s a crazy kooky town.”

“Yes, it’s divided. There are Shia neighborhoods, Christian areas—but they all go to the same restaurants,” explained the world-traveller. “You can go from bikinis by the pool to Hezbollah in an 8-minute cab ride. They all coexist in a weird way. That’s part of the thing that makes Beirut so interesting.”