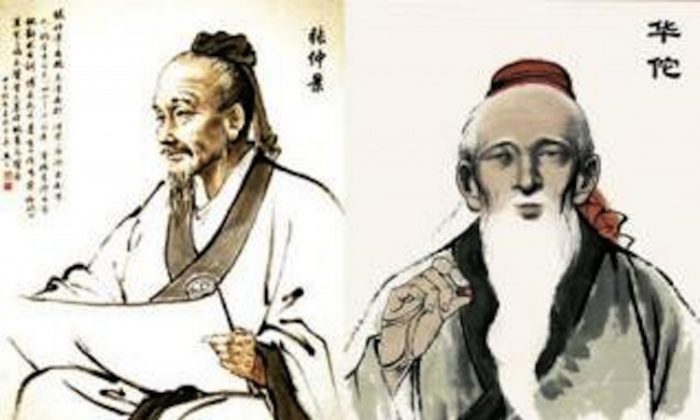 The most renowned ancient Chinese doctors are said to have exhibited supernormal abilities, including being able to look into a person’s body to see the cause of an illness.

Here’s a look at some extraordinary doctors and their abilities.

Portrait of the physician Hua Tuo from a Qing Dynasty edition of The Romance of the Three Kingdoms. (Wikimedia Commons)

Hua Tuo is known as the first surgeon in Chinese medicine. He is also said to have used supernatural abilities to see the tumors and other internal problems to identify them as the cause of an illness.

When he told Emperor Cao Cao he had a tumor in his brain, Cao Cao thought Hua Tuo wanted to kill him, using the pretext of performing head surgery. Hua Tuo died in prison and Cao Cao died of his illness.

Hua Tuo was a humble man, uninterested in fame and self-interest. Though he examined the emperor, he usually worked with the common people. He was forced to diagnose the emperor after he had already refused the offer to become the emperor’s official physician.

Hua Tuo was called the “Divine Physician,” or “Shenyi,” in Chinese. He is also known for developing a type of qigong exercises. Many physicians in ancient China paid much attention to their spiritual cultivation and strived to maintain a high moral character. Their supernormal abilities could only come to them this way.

Without any method to scan the inner body, the surgeries Hua Tuo performed were believed to be guided by divine vision.

An account of Bian Que’s life is given in “The Records of the Grand Historian,” (“Shih Chi,” in Chinese) by the famed historian Sima Qian. Bian Que met a man with supernatural powers who gave him a mysterious medicine.

The man instructed Bian Que to ingest the medicine with water “that has not touched the ground,” such as dew. A month later, Bian Que had X-ray vision.

Bian Que passed the funeral procession of a prince, but Bian Que saw that the prince could still be revived. Indeed, it turned out the prince was just in a coma and after he was treated with acupuncture, the prince became well again.

“A Treatise on Cold Injury” (“Shang Han Lun” in Chinese), one of the oldest clinical textbooks in the world, compiled by Zhang Zhongjing. (Wikimedia Commons)

When Zhang Zhongjing was 20 years old, he met an official named Wang Zhongxuan. Zhang told Wang his eyebrows would fall out at the age of 40 and that when this happens, Wang will die within half a year. Zhang gave Wang a prescription to prevent this occurrence.

Wang accepted the medicine, but did not take it, because he was offended and did not believe Zhang.

Days later, Zhang asked Wang if he had taken the medication and Wang lied, saying he had. Zhang wasn’t fooled. He said: “It looks like you didn’t take it. Why don’t you care about your life?”

Years later, when Wang was 40 years old, his eyebrows fell out. As predicted, he died within half a year.