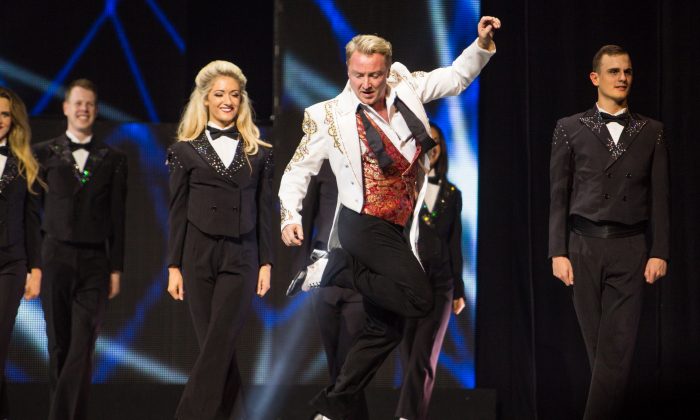 An Interview With ‘Lord of the Dance’ Creator Michael Flatley

NEW YORK—Performing for the first time on Broadway can be both a sobering and heady experience. But making your Broadway debut at the same time you’ve announced your retirement adds a bit of nostalgia to the mix, which is the case for “Lord of the Dance: Dangerous Games” star Michael Flatley.

The creative vision of Flatley—a dancer, director, producer, and choreographer, as well as a master flutist—almost single-handedly changed the face of Irish dancing. Now, after more than two decades at the forefront of that world, his career as a dancer is coming to an end.

“We’ve been traveling the world for the last 20 years and my body has taken a severe beating over that time,” the 57-year-old Flatley told the Epoch Times by email. “The last thing on my list … was Broadway, and I promised my dancers that I would bring them to Broadway before I retire.”

“Lord of the Dance: Dangerous Games” can been seen at Broadway’s Lyric Theatre through January 3. The production features holograms, pyrotechnics, and dancing robots—all wrapped up in a story about good versus evil—and almost all told through dance.

Integral to “Lord of the Dance: Dangerous Games” is what Flatley calls “a very moving theatrical storyline that will leave audiences on their feet time and time again.” The show features such sequences as “Dark Lord,” “Hell’s Kitchen,” “Nightmare,” and “The Duel.” These names conjure up images of ominous danger and struggles of epic proportions.

Flatley’s personal favorite is a “Warlords” number. “I think [it’s] the best number in show business, and for 20 years has been thrilling audiences around the world.” Then again, as he’s quick to point out, no single part in the show ever gets old for him and audiences never leave without giving the performers a standing ovation.

This reaction suits Flatley’s ultimate mission just fine. “I hope the average person who sees the show will leave singing and dancing and tapping their toes and feeling like they’ve had a great nights’ entertainment.”

Flatley’s trip to Broadway has been a long time coming. One could say he’s been working toward this goal ever since he first stepped on stage. In 1994, with several years of professional dancing already under his belt, he achieved worldwide acclaim with his creation of “Riverdance.”

Two years later came Flatley’s “Lord of the Dance.” The new show broke box office records all over the globe, including a record-breaking run of 21 consecutive shows at London’s legendary Wembley Arena. That record still stands.

Flatley basically turned traditional Irish dancing on its head by incorporating upper body movement and creating edgy rhythmic patterns that departed from the traditional approach to the form. His succeeding shows, “Feet of Flames,” “Celtic Tiger,” and “Lord of the Dance: Dangerous Games,” continued this vision and became international hits.

“We had our detractors and there were many purists who were unhappy with the change, but the majority of people and general public seemed to love the new direction we chose,” he said.

Flatley is particularly proud of his dancers, many of whom have been with him for years, and who he has seen “become more accomplished every year”—even as the choreography has become ever more demanding.

The process of creation, he explains, comes from within oneself more than from any outside inspiration. “I admire all dancers and anybody who is proficient with their art, but to create something entirely unique you need to go inside yourself, and that’s what I’ve tried to do over the years.”

Ask Flatley what he thinks the future holds once he steps off the stage forever, and he’ll demur on the subject, preferring to concentrate on the here and now.

“I take each day as it comes. Right now my focus is on Broadway and making this the best run of my career. [It’s been an] extremely rewarding experience for myself and all of my fabulous dancers. For 20 years we’ve conquered the world in every major venue and every major city. Broadway was the last stone unturned. Mission accomplished.”

While Broadway was intended to be Flatley’s swan song for professional dancing, it seems he will continue a little while longer. Shortly after this interview was conducted, it was announced that following the closure of “Lord of the Dance: Dangerous Games” in New York, it will begin a brief tour of the United States due to its popularity.

“I haven’t performed in America for years, and we are really looking forward to ending this tour and my time on stage with a bang!” Flatley noted in a press statement.

For more information about “Lord of the Dance: Dangerous Games,” visit lordofthedance.com