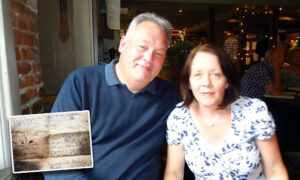 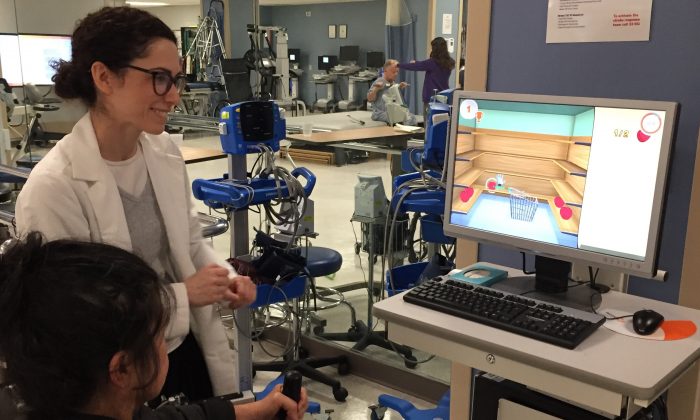 An Interactive Approach to Stroke Rehabilitation

NEW YORK—Suffering from a stroke can have a major impact on patients’ cognitive, speech and motor functions. Rehabilitation during recovery is critical to regaining these faculties. Now, at New York University’s Langone Hospital in Brooklyn, doctors and physical therapists are taking a new, interactive approach to post-stroke rehabilitation.

Vincent Cavallaro is the vice president of neurology and rehabilitation at NYU Langone-Brooklyn and is part of the team that is incorporating “gaming” into the recovery model. Typically, rehabilitation consists of physical therapy, occupational therapy, speech pathology therapy, and sometimes neuropsychology therapy. The primary goal of physical therapy is to get the patient up and walking around, and to ensure their balance is steady enough for treatment. Occupational therapy involves relearning daily activities like cooking and showering. Speech pathology services are used to evaluate swallowing and the ability to speak.

Patients are initially seen by a physiatrist, a doctor who specializes in rehabilitation medicine. The physiatrist develops a treatment plan specific to a patient’s needs to achieve the best possible recovery. Patients are required to receive three hours of therapy a day, and a total of 15 hours a week. Now, the team has implemented four different interactive devices to enhance the recovery process, and encourage patients to regain the quality of life they had before a stroke.

According to the National Stroke Association, 10 percent of stroke survivors regain almost all of their functions, and 25 percent recover with minor impairments. However, in order to recover from a stroke, patients need to take control of their own rehabilitation process. Rehabilitation can be daunting and frustrating, and it can be difficult to keep patients involved in the process. However, the earlier a stroke patient starts the process the more likely they’ll have favorable results. Often, as long as a patient is stable, rehabilitation starts within a matter of a couple of days.

Doctors and physical therapists are always on the lookout for new technologies to keep patients engaged during the rehabilitation process. One of the devices NYU has employed is the Armeo Spring, a giant video game controller that requires the entire arm to move. The device is designed to help patients regain mobility in their arms and provides some movement assistance. In addition to working on mobility, the device is also designed to prevent contractures, which are the result of stiffness in the muscles, tendons, or ligaments and can ultimately restrict motion. Part of the importance of keeping a patient engaged in their recovery is to facilitate continual treatment to prevent such conditions.

“Once you do it and learn the process and realize that you’re in a safe environment, then there’s a score that comes up and they try to beat their score, or try to avoid hazards along the screen. So they’re kind of playing against themselves, and there’s further engagement on the patient level than trying to do this without this enhanced feature of this constant feedback that they get,” PT Cavallaro told The Epoch Times.

The machine can anticipate arm movement, and helps patients move their arm once the arm is in motion. The device is connected to a computer monitor that can simulate everyday activities such as picking an item off of a shelf at the supermarket and placing it in a shopping basket.

Balance, cognition, and memory are important functions that rehabilitation can help recover, and the team at NYU utilizes a device called the Bioness Integrated Therapy System that has several different programs. Patients stand in front of a large computer screen and point at images on different parts of the monitor, making them shift their weight in different directions, which ultimately helps them regain balance. Another program helps improve memory by requiring the patient to tap a series of objects on the screen, and then tap on the same series again to show they remember.

Once patients regain more balance, they move on to the Korebalance System. Patients stand on a flexible platform and shift their weight with their feet while playing a video game where they have to stay on a track. Instead of using their hands like they would if they were playing a typical video game, patients use their feet and allocate their weight on the platform to stay on the track. This system ultimately helps fine tune patients’ balance.

The fourth interactive device patients use is called the Flint Rehab Glove, and it is designed to help patients regain mobility in their fingers. The glove is connected to a video game similar to Guitar Hero. Each finger corresponds to a colored button on the screen. Once the button appears, they touch the appropriate finger with their thumb and the game makes a sound, and the repetitive movement creates a song.

More Than a Game

According to PT Cavallaro, patients have reacted positively to these interactive games. The rehabilitation team works to ensure a patient has the ability to complete each game before moving onto the next in order to promote a positive, can-do attitude, and show that they can accomplish more than they previously believed.

“I think when you’re playing a game, I think there’s a natural tendency to want to score better each time you do it, and that gives you that visual input that comes off the screen that patients see, and want to, next time they’re on that machine, get a higher score or a longer distance time.”

These interactive games give the physical therapist another means of treating their patients and enhances the traditional rehabilitation methods. When patients succeed and families see them prevail in their treatment, they are less apprehensive when the patient returns home.

While the relationship between the patient and the physical therapist is the most important aspect of recovery, there is a lot to gain from technology.

These new technologies come at a time when stroke recovery is a growing concern.

According to the Centers for Disease Control and Prevention, strokes are the fifth leading cause of death in the United States. Approximately 795,000 people suffer from a stroke annually. There are many factors that can lead to a stroke such as a history of strokes in the family. Medical conditions such as hypertension, diabetes, and Sickle Cell Anemia can also contribute to a stroke. However, there are behaviors that can make a stroke more likely such as alcohol abuse, tobacco use, lack of exercise, and an unhealthy diet. Fortunately, these behaviors can be moderated or avoided completely.

Following a stroke, patients may experience a variety of impairments including paralysis in some limbs or on one side of the body, difficulty understanding or constructing speech, trouble controlling or expressing emotion, numbness or sensation, trouble swallowing, and depression.

Successful rehabilitation can be the difference between years of suffering and dependency and a meaningful and active life.