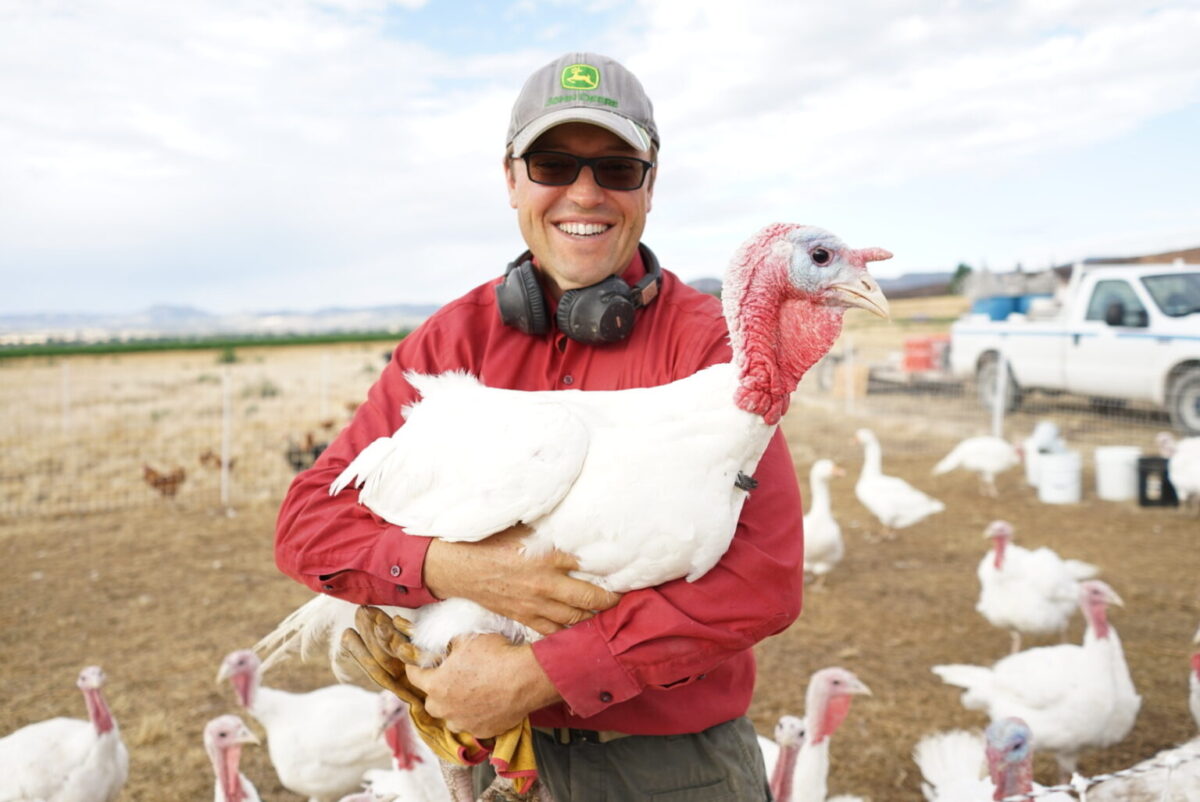 A community rallies around Utah farmers who lost everything to fire
BY David Dudley TIMEFebruary 2, 2022 PRINT

Regenerative farmers Robert and Jodi Bronner stood on a charred hillside in Enterprise, Utah, holding hands in the early morning sun. The smell of charred earth lingered in the cool, damp air.

Though they usually began work when the sun came up, they started late on that summer day. They were exhausted. The hills to the north, west, and south were scorched by a wildfire that had ripped through the area in June. Since then, the community—neighbors, customers, and fellow farmers—had rallied to help the Bronners get back on their feet. Even with their help, the couple was still struggling to catch up on their work, as well as their rest.

The Bronners, who specialize in high-quality pork and poultry, had kept their butchery equipment in an aluminum building located about 50 yards uphill from where they stood. Back in June, Robert saw lightning strike about 5 miles to the west of the building. It was 11 a.m. He called 911. The dispatcher said that firefighters were already en route. Though firefighters descended upon the fire quickly, the fire’s behavior was erratic. It grew quickly and burned uphill, devouring everything in sight.

“We thought the building would be safe, because it’s metal,” Robert said. “But it turned into an oven. When I came back later that night, I touched the wall, and it burned my hand. Everything inside was incinerated.” The building smoldered for 10 days after the fire. Somehow, a trunk of blankets survived, as did a photo album.

About 20 feet downhill from the burned building, there was a small wooden house that had been occupied by pigs before the fire. The little house, as well as the 4.6-acre patch of land where the pigs had lived and cultivated the soil for three years, were the only things in sight that were left untouched by the fire. “We didn’t have time to round up the pigs. The firefighters told us that we had to go. So, I cut holes in the fence, to give the pigs a fighting chance.” Robert said. “Later, when we returned, the pigs were here, safe. It was a miracle.”

A Community Rallies Together

Before the fire, Robert said he had been getting closer to earning his livelihood from his small business. “The American Dream,” he said. But the fire destroyed all of the Bronners’ butchery equipment, feed, and supplies.

“But the hardest part,” said Jodi, “is losing the place where you farm. All of our animals leave the land better than they found it. Just as we try to be good stewards of the land, the animals do, too.”

The Bronners, who are members of The Church of Jesus Christ of Latter-day Saints, had to start from scratch. “Though this has been hard,” Robert said, “it has given us the chance to press reset. It has tested our values. I was taught to never give up. You have to have faith when something like this happens.”

The Bronners were used to helping others, but the thought that others would come to their aid had never crossed their minds. So, when their church, neighbors, and customers began offering help, the Bronners were overwhelmed with humility and gratitude. “We needed their help more than we knew,” Robert said. “After weeks of moving things, and cleaning, I realized that I couldn’t do it alone.”

A local church leader offered to bring some men to help the Bronners move the burned equipment out of the building. Then, various community members and customers offered to give the Bronners totes, barrels, and buckets. “We really needed those,” said Jodi. “But really, we needed so much more. We lost nearly everything in the fire.”

That’s when Kat Puzey, the executive director of MoFaCo, stepped in. “What happened to the Bronners would put most small farmers out of business,” Puzey said. “It’s devastating. They’d built something that was well on its way to becoming a sustainable business. And, they have the best chicken around.”

Puzey started a fundraiser for the Bronners, who’d lost over $10,000 in equipment. She set a modest goal of raising $5,000. Robert was about to dip into his life savings to replace the butchery equipment when he learned that Puzey’s fundraiser had raised $4,500, which was available to use immediately. “With GoFundMe,” Puzey explained, “you can begin using funds before you reach your goal. Robert used that money to buy new equipment, so he could continue to fill orders.”

A month after the fire, the Bronners were still struggling to get back on their feet. As they looked around the charred hillside, they were silent. They wouldn’t be able to farm this land for a long time to come, and their makeshift slaughterhouse was being razed. Then, Jodi noticed some new plants reaching up from the blackened soil. “That’s the pigs,” she said. “They spent three years cultivating this soil. Now, it’s regenerating itself faster than the rest of this land.” But even that land, an unspoiled island among a sea of charred earth, would take years to fully regenerate.

Nevertheless, the Bronners said they felt blessed by all the support they’d had. They were offered some land in Beryl, Utah, where they had begun to set up shop again and resume their farming operation. Equally important, they said, were the thoughts and prayers offered by the community. “While the money helps to keep our business alive,” Robert said, “people’s kindness has helped to keep our spirits up. We couldn’t do this without them.”

As Robert and Jodi turned away from the burned land to the west, they faced lush fields to the east. They held hands in silence as they walked toward their truck. Then Jodi stopped, squeezing Robert’s hand. “I guess this is goodbye,” she whispered into his ear. “We won’t be coming up here anymore.”

David Dudley
Follow
David Dudley is a Southern Utah-based journalist, educator, and playwright. Drop him a line at daviddudley@gmail.com
SHARE
Friends Read FreeCopyFacebookTweet
You May Also Like