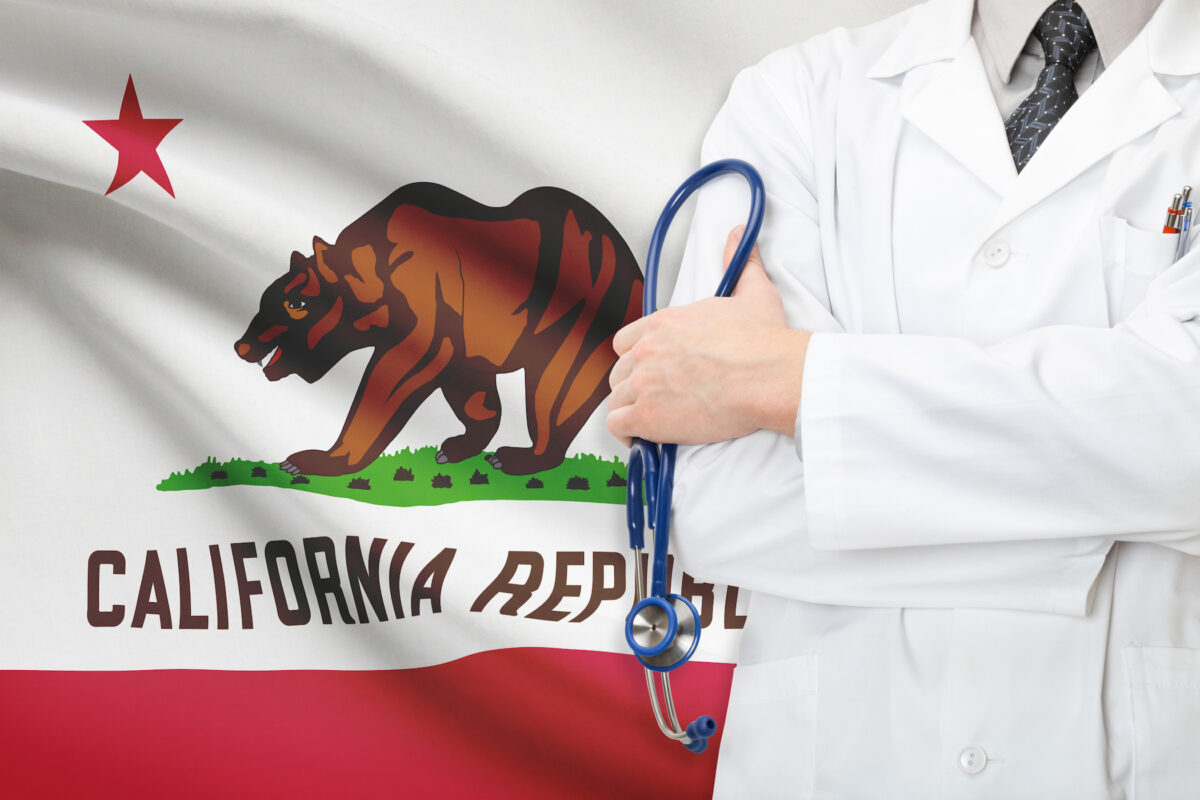 All Eyes on Gov. Newsom as California Looks to Pass Nation’s First Law to Punish Doctors for COVID ‘Misinformation’

California Assembly Bill 2098, passed Aug. 29 by the California Senate and now awaiting Gov. Gavin Newsome’s signature, would subject doctors and others to disciplinary action — including having their licenses to practice medicine in California suspended or revoked — for spreading COVID-19 “misinformation.”

California is poised to become the first state to take legal action against medical practitioners accused of spreading COVID-19 “misinformation or disinformation.”

California Assembly Bill 2098 (AB 2098), passed Aug. 29 by the California Senate and now awaiting Gov. Gavin Newsome’s signature, would subject doctors and others to disciplinary action — including having their licenses to practice medicine in California suspended or revoked — for spreading “vaccine disinformation.”

The bill, which states that some of the most “dangerous propagators” of inaccurate information about COVID-19 vaccines are licensed healthcare professionals, declares it to be “unprofessional conduct” for a physician and surgeon to disseminate “misinformation or disinformation related to COVID-19, including false or misleading information regarding the nature and risks of the virus, its prevention and treatment; and the development, safety, and effectiveness of COVID-19 vaccines.”

Gov. Newsom, who has until Sept. 19 to sign the bill, has not yet taken a public position on it, The New York Times reported.

The bill defines “misinformation” as any “false” information that is “contradicted by contemporary scientific consensus contrary to the standard of care.”

This is absolutely horrifying. A new bill in CA is about to become law that would take away the medical licenses of doctors who disseminate "misinformation," defined as anything that departs from the scientific consensus. This has serious First Amendment implications 1/ https://t.co/Iqk9NwKbty

Physicians for Informed Consent on its website has an image of a physician with duct tape over her mouth accompanied by this statement: “If AB 2098 passes, I won’t be able to tell you what I really think.”

Dr. Meryl Nass, an internist and biological warfare epidemiologist, told The Defender, “Multiple states have already threatened or punished doctors for ‘spreading COVID misinformation.’ I had my license immediately suspended for this and await a hearing next month.”

“However, we have a First Amendment and often state laws that explicitly protect free speech.

“The California legislation, when signed, will be a first-in-the-nation attempt to legislate around the First Amendment and criminalize free speech.

“This will legalize what has already been carried out by what I would call ‘rogue’ medical boards who are unaware of our constitutionally guaranteed rights.”

AB 2098 was introduced in mid-February by California Assemblymember Evan Low — one of seven Democratic lawmakers who in January formed the Vaccine Work Group to develop legislation promoting the use of COVID-19 vaccines while “battling misinformation.” The bill passed the California Assembly in May.

Assemblymember Low said in a statement the bill would give California medical boards the “tools” necessary to bring “discipline actions” against licensed physicians charged with spreading COVID-19 misinformation.

“Due to their specialized knowledge and training,” Low said, “licensed physicians possess a high degree of public trust and therefore must be held to account. The spreading of misinformation, of inaccurate COVID-19 information, contradicts that responsibility and threatens to further erode the public trust in the medical profession and puts all patients at risk.”

However, critics said that AB 2098 would have negative repercussions if it were made into law.

California Health Coalition Advocacy (CHCA), an organization that works to “expand, protect and promote the health and well-being of Californians,” in March wrote a letter to Assemblymember Low voicing its concerns about AB 2098.

In the letter, CHCA said doctors go through “rigorous education and training” and should be allowed to “voice their medical and professional opinions freely” and that the healthcare provider shortage might be “exacerbated” as an “unintended consequence” of the proposed law.

CHCA said it’s problematic that the bill defines “misinformation” as anything that goes against contemporary scientific “consensus,” as science is a continual evolution whose development has historically depended on considering minority voices.

Other opponents of the bill said the “standard of care” language is too vague and warned that it could be construed to mean whatever the government says it means.

Political commentator Robby Soave, a host of “Rising” on Hill TV, wrote in an article for Reason:

“Science is a deliberative process, and medical professionals need to be allowed to dissent from mainstream orthodoxies and challenge dominant perspectives. Patients deserve expert care, but it’s unreasonable for the government to compel ideological conformity in this field.

“Besides, the state has shown no particular aptitude for discerning what constitutes genuine misinformation. On the contrary, government actors have frequently instructed social media companies to be wary of perfectly legitimate points of view.”

“Science and medicine,” CHCA said in its letter to Assemblymember Low, “have historically been advanced through minority voices. The stifling of dissenting opinion will have long-lasting effects on the advancement of health care.”

“The understanding of the data and science related to COVID-19 continues to change as more studies are done. Standards of care are being updated as new information and treatments emerge.

“Any attempt at determining ‘contemporary scientific consensus’ will be fleeting.

“Top doctors in their field from UCSF, Stanford, and other well-respected institutions are speaking out about their lack of support for COVID-19 vaccines for children. Would these respected doctors be disciplined if AB 2098 were to pass?”

Some critics argued that if doctors risk losing their license by sharing any medical information not supported by “scientific consensus,” doctors will be unable to thoroughly discuss possible modes of treatment with patients and unable to provide patients with sufficient information to consent to treatments.

“As a patient, you have rights to full informed consent prior to any medical intervention or therapeutic use. Furthermore, you have the right to access and try novel or off-label treatments, if you and your doctor determine this is the best choice for you. AB2098 will strip you of those rights.”

Some said the bill would “criminalize” patients’ informed consent process. Such medical censorship would mean “opening the gates to medical atrocities,” said Vera Sharav,  founder and president of the Alliance for Human Research Protection

“Criminalizing informed consent is the last step before medicine is weaponized — as a murderous, government-dictated endeavor,” Sharav told The Defender.

However, the American Medical Association (AMA), which strongly supports AB 2098, hopes other states will follow suit in “ensuring that licensing boards have the authority to take disciplinary action against health professionals for spreading health-related disinformation,” according to a new policy adopted at its mid-June annual meeting aimed at addressing public health “disinformation.”

The adopted policy expanded on prior efforts and called for the AMA to work with “health professional societies and other relevant organizations to implement a comprehensive strategy to address health-related disinformation disseminated by health professionals.”

In addition to equipping licensing boards with the legal tools to punish doctors for “spreading health-related disinformation,” the AMA’s adopted policy included these eight other priorities:

The safety and efficacy of COVID-19 vaccines continue to be topics of scientific debate.

In July, seven highly distinguished medical researchers — including Peter Doshi, Ph.D., — wrote an open letter in The BMJ to the CEOs of Moderna and Pfizer asking the pharmaceutical companies to release clinical trial datasets for independent scientific review.

Doshi and colleagues noted the results of their recent study showing the Pfizer and Moderna COVID-19 vaccines exhibited a “risk increase” of “serious adverse events of special interest” — which raised concerns that “mRNA vaccines are associated with more harm than initially estimated at the time of emergency authorization.”

“COVID-19 vaccines are now among the most widely disseminated medicines in the history of the world,” they said. “Yet, results from the pivotal clinical trials cannot be verified by independent analysts.”

“The public has a legitimate right to an impartial analysis of these data. COVID vaccinations have cost taxpayers tens of billions of dollars, perhaps even rivaling the annual NIH [National Institutes of Health] budget for all aspects of biomedical and behavioral research.

“Transparency, reproducibility, and replication are cornerstones of high-quality science. The time is overdue for Pfizer and Moderna to allow independent scientists and physicians to see the original data and to replicate the analyses.”

Suzanne Burdick, The Defender
Follow
Suzanne Burdick, Ph.D., is an independent journalist and researcher based in Fairfield, Iowa.
SHARE
Friends Read FreeCopyFacebookTweet
You May Also Like