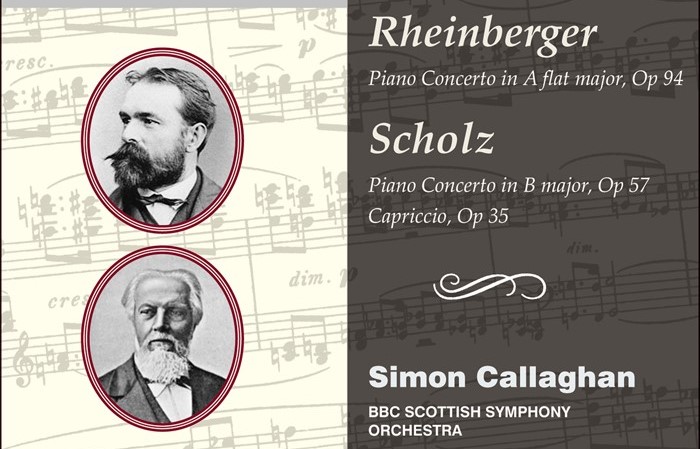 The Austrian-German symphonic canon goes something like this: Haydn, Mozart, Beethoven, Schubert, Schumann, Mendelssohn, Brahms, Bruckner, and Mahler. Yet, if we consider the piano concerto, we run out of names after Brahms. The later history of the piano concerto is with composers born outside of this tradition, and other Austrian-German composers writing in the same tradition are virtually nonexistent—at least that is what is implied by the repertoire performed in most concert halls.

This new disc from Hyperion‘s “The Romantic Piano Concerto” series (volume 76) gives us a chance to move away from the canon and explore. It pairs late-Romantic piano concertos by two lesser-known composers from the Austrian-German tradition: Joseph Rheinberger and Bernhard Scholz. These are performed by pianist Simon Callaghan with the BBC Scottish Symphony Orchestra (SSO), led by conductor Ben Gernon.

Joseph Rheinberger was something of a prodigy, who went on to train in Munich and spent most of his life teaching there. While he wrote music in a wide variety of genres, he is best known for his organ sonatas, though lovers of choral music hold his masses in some regard.

His piano concerto was written in 1876, between Brahms’s first and second concertos. Unfortunately, Bryce Morrison’s booklet note, while admirably covering the music itself, does not let us know for whom it was written.

The concerto is in some ways a surprising work. Rheinberger is known for his admiration of Bach and the solidity of his structural construction. Yet here is a concerto whose piano writing sometimes evokes Liszt and perhaps Saint Saëns, whose Piano Concerto No. 4 dates from 1875.

The work is in three movements. The lively opening Moderato starts with a striking call to attention before moving to strong sonata form. The slow movement, Adagio patetico, is surprisingly full-blooded, while the Allegro energico is just that, with the whole written on a grand scale; it lasts something over 30 minutes.

Bernhard Scholz is a lesser-known name; he was part of the musical circle that included Joseph Joachim, Clara Schumann, and Brahms. Clara Schumann championed Scholz’s piano concerto, having premiered it in 1875. We can detect the influences of Brahms in the work, but also Mendelssohn and Schumann.

Another seriously large-scale work (it lasts almost 30 minutes), there is much to enjoy, with piano writing that moves between the Schumann-esque and the virtuosic. We are also treated to one of Scholz’s lighter pieces, the charming Capriccio for piano and orchestra.

The performances here are excellent, with Simon Callaghan making light work of the pieces’ technical demands. He brings a strong sense of sympathy for the style of the late-Romantic concertos, allowing for some seriousness of purpose but also playing with fizz and élan where necessary. He is well-supported by the BBC SSO and Ben Gernon.

These accounts of the works go far beyond the dutiful. Callaghan, Gernon, and the BBC SSO are highly persuasive and make us listen to these works properly.

Listening to this disc dismisses any idea we might have of lesser-known Austrian-German piano concertos to be academic and dull. Here, both composers combine seriousness of purpose and strong construction with engaging piano writing. There is certainly much to enjoy, and this is a lovely exploration of a forgotten corner of the repertoire.