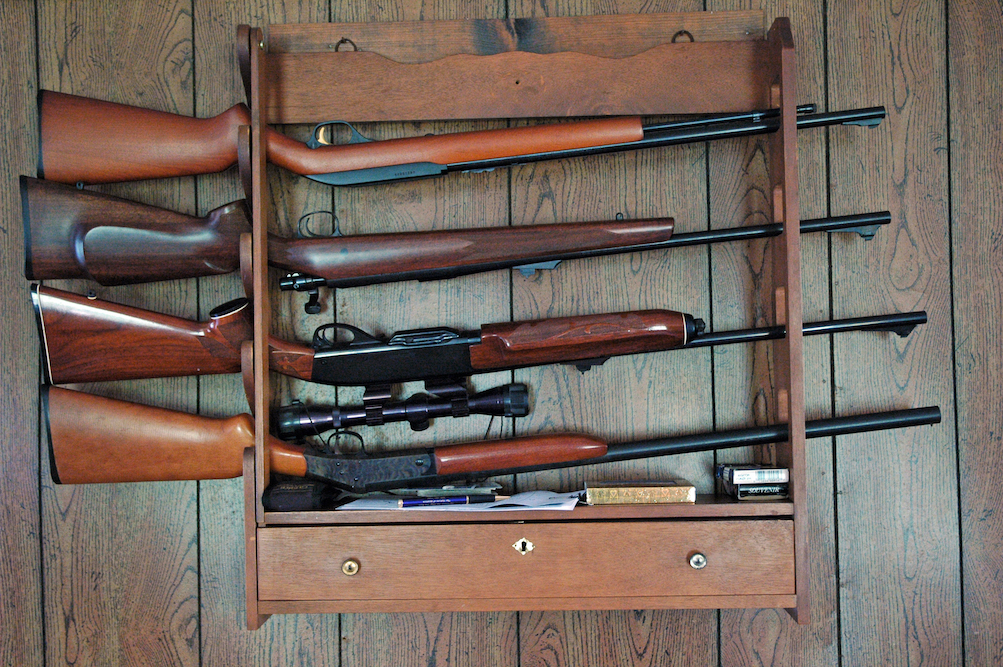 Many Americans facing dementia and other ailments have guns they can no longer use safely.(Malachi Jacobs/Shutterstock)
Aging

Owners can help ensure safe use and transfer of weapons
BY Judith Graham TIMEMay 22, 2022 PRINT

Kerri Raissian didn’t know what to do about her father’s guns when he died of COVID-19 in December 2021 at age 86 and left her executor of his estate.

Her father, Max McGaughey, hadn’t left a complete list of his firearms and where they were stored, and he hadn’t prepared a realistic plan for responsibly transferring them to family members.

What’s more, McGaughey had lived alone for at least a year at his home in Weimar, Texas, after being diagnosed with dementia in October 2020—a situation Raissian realized was potentially unsafe but didn’t know how to address.

Now, a new tool can help gun owners and family members plan ahead for safe firearm use and transfers in the event of disability or death: The Firearm Life Plan, created by researchers at the University of Colorado and the Rocky Mountain Regional VA Medical Center in Denver.

Think of it as advance care planning for guns—a way for someone to describe what they want to have happen to their firearms should they die or become physically or cognitively disabled and unable to use them responsibly.

The goal is to prevent accidental injuries that can result if older gun owners forget to store firearms safely, their hearing and vision are impaired, they become seriously depressed, or a medical condition such as arthritis prevents them from handling firearms adeptly. Another goal is to ensure that firearms are transferred safely to responsible new owners when the need arises.

This is a real concern because 42 percent of Americans 65 and older live in households with guns, according to the Pew Research Center, and more than 100 people die of firearm injuries in the United States each day. Among adults ages 50 and older, 84 percent of firearm-related deaths are suicides.

The Firearm Life Plan has four parts. First, there’s a list of warning signs (physical, cognitive, behavioral, and emotional) that might cause a gun owner to use a gun inappropriately. Among them are symptoms associated with dementia, whose dangerous nexus with firearm ownership was the topic of a KHN investigation in 2018.

Up to 60 percent of people with dementia live in homes with a firearm, according to an overview of gun-related injury and death published in 2019.

The Firearm Life Plan kit stresses personal responsibility, safety, and the importance of being prepared, themes that older owners and family members emphasized in focus groups conducted by researchers.

Key messages for owners are “this is your decision” and “it’s voluntary,” said Dr. Emmy Betz, co-founder of the Colorado Firearm Safety Coalition and a University of Colorado researcher who led the project. Also, the kit notes that people’s plans may change over time and the worksheets gun owners fill out aren’t legally binding.

“We talk a lot about safe gun storage. This really challenges us to make sure that guns are handled appropriately when an owner dies or experiences health declines,” said Cassandra Crifasi, director of research and policy at the Center for Gun Violence Solutions at the Johns Hopkins Bloomberg School of Public Health.

A second part of the guide features conversation prompts for family members and friends who might be concerned about an older gun owner and for older adults who recognize the value of planning ahead. Among them:

“You always taught me about firearm safety. That’s why I wanted to talk about some changes I’ve noticed lately.”

“Do you think it’s time to have someone give you an honest assessment about how you’re handling your firearms these days?”

“If I’m ever incapacitated or die, I need to make sure my firearms are taken proper care of. Having a conversation about what to do is important to me.”

Conversations of this sort are bound to be difficult since they touch on fundamental issues of identity, autonomy, safety, and mortality.

“I’ve seen several people that I’ve really been worried about and had conversations with a couple of them that haven’t gone particularly well,” said Richard Abramson, founder of Colorado’s Centennial Gun Club and a former board member of NSSF, a firearm industry trade group.

“In my opinion, it’s much harder to get someone to relinquish their firearms than their car keys because of this strong feeling that I need to protect myself and my loved ones.”

“I would ask, ‘Who is the person you trust the most to come to you and tell you you’re beginning to lose it?’” said Dr. Michael Victoroff, 72, a physician who is a competitive shooter and firearms safety instructor. “You’ve got to tell that person you want him to be straight with you when the time comes, even though it’s a horrible thing to talk about.”

The third piece of the Firearm Life Plan is the most straightforward. It calls for people to create an inventory of their firearms, where they’re stored (including codes to lockboxes, storage sheds, and gun safes), who should get the firearms when the owner dies or is willing to relinquish them, and when transfers should occur.

Khalil Spencer, 68, a retired scientist from Los Alamos National Laboratory and a member of the board of directors of the Los Alamos Sportsmen’s Club, is among the legions of gun owners who haven’t assembled this kind of information. When I asked him how many guns he had, he responded, “At least a dozen, I’ve lost track.”

In some ways, Spencer is well prepared: After a “mini-stroke” eight years ago, he talked to his family and asked a former colleague to help his wife dispose of his firearms should he become incapacitated or die. Spencer wants the colleague to take some guns, give others to Spencer’s two younger brothers, and sell whatever is left behind.

Still, Spencer acknowledged, he hasn’t inventoried his firearms or included plans for them in his will. “At this point, it’s all been done verbally and via email,” he said.

Similarly, David Yamane, 53, a professor of sociology at Wake Forest University who has written extensively about America’s gun culture, hadn’t thought about describing what should happen to his guns in his will before he reviewed the Firearm Life Plan. Altogether, he and his wife have 18 firearms.

Because gun owners care deeply about personal protection (two-thirds of owners cite this as a major reason for having firearms), it might be hard for them to give up guns as they grow older, Yamane said. “There would have to be some way of compensating for that feeling of vulnerability,” he suggested. Possibilities include installing a home alarm system, buying a dog, and moving in with someone else or to a senior living complex.

Barriers to using the plan might also arise because gun owners are “incredibly resistant to being told they shouldn’t be doing what they’re doing,” Victoroff said. He plans to transfer ownership of all his firearms to a “gun trust” and name himself, his wife, and his children as joint trustees with equal rights. Altogether, Victoroff estimates he owns “more than 20, less than 30” firearms.

The fourth component of the guide is a “legacy” section that asks gun owners to share memories and stories about their firearms and what they’ve meant to them.

“This becomes a plan for transferring family knowledge, and I think that’s really lovely,” said Raissian, a third-generation Texan who now researches gun violence prevention at the University of Connecticut. “Some of the guns in my dad’s estate are my grandfather’s, and I’m pretty sure dad would have told me the stories if I’d asked, which I didn’t, unfortunately.”

As for disseminating the Firearm Life Plan, Betz hopes that gun shops, shooting ranges, gun industry groups, and aging organizations will make copies available. She’s in discussion with several groups, but none have publicly endorsed the plan yet.