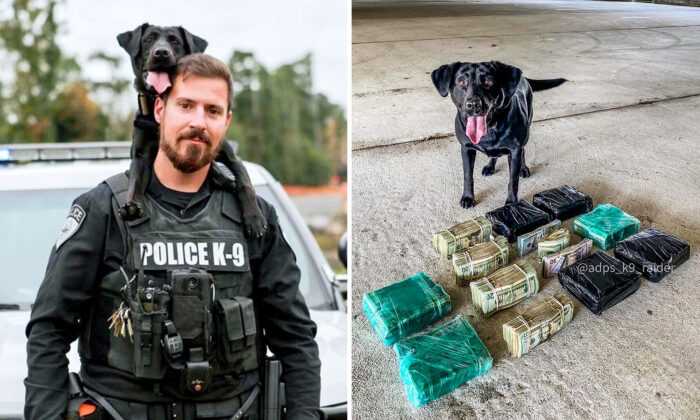 Raider may be an adorable black Lab, but her uncanny hunt instinct made her the perfect K-9 sniffer dog.

The cute pup went viral on TikTok after her fun-loving owner and work partner, Officer Ritchey, of the Alpharetta Police Department, started recording their adventures together.

Officer Ritchey first met Raider on a small farm, where he would intentionally toss a tennis ball into thick, tall grass for her to fetch. Raider wouldn’t come out of that grass without the ball—no matter how long it took.

“This was great to see because we look for a strong hunt drive in detection dogs,” Ritchey told The Epoch Times.

Then he shared a funny anecdote: “The farm had chickens, and the owners had a large bag of chicken feed in the kitchen. Raider must have been a fan, because when she came inside, she ran to the bin, knocked it over, and started stuffing her mouth with as much chicken feed as possible, it was pretty funny.”

Soon they partnered up, and Raider started her stint with the department, initially making trips to schools with Officer Ritchey as a community relations and youth drug prevention K-9. Their job was to “be in the public eye as much as possible,” conduct narcotics sweeps “to help deter students from bringing drugs to school,” and also “create relationships with the community.”

But when the pandemic struck, the pair were reassigned, and Raider became a sniffer dog on the frontlines, locating drugs, catching criminals, and finding missing persons.

“Recognizing how great of a detection dog she is, we have been reassigned as a patrol K-9 team,” Ritchey told the newspaper. “I don’t think she’s much different than other K9s other than her initial job was a little different.

“We are a support unit to the patrol officers,” he said. “If officers request us on a traffic stop because they suspect drugs are in the vehicle, we would respond and Raider would do an exterior vehicle sniff.”

Watching their TikTok videos, millions of viewers have been amazed by Raider’s faculty as a sniffer dog. In several short clips, Officer Ritchey releases her into a parking lot; not minutes later, she’s poised sitting in front of a car, nose pointing at a wheel well, tail wagging furiously. Ritchey is seen peeking under a bumper and catching sight of a small bag filled with a white substance.

Although timid in crowds, once the search command is given, Raider becomes a “completely different dog,” her handler said, adding, “Raider’s hunt and prey drive overpower any of her fears and she will find whatever she is looking for when it’s time to work.

“Her most favorite thing to do at work is her job, finding drugs or people.”

But beyond her remarkable skill set, Raider is just plain adorable.

“She is the sweetest dog and very lovable,” Ritchey said. “She’s very friendly and loves to greet people with kisses. Even suspects love Raider.

“On several occasions when we show up on a traffic stop, and after Raider is alerted and drugs are located, the suspects often say, ‘Aww your dog is so cute!’”