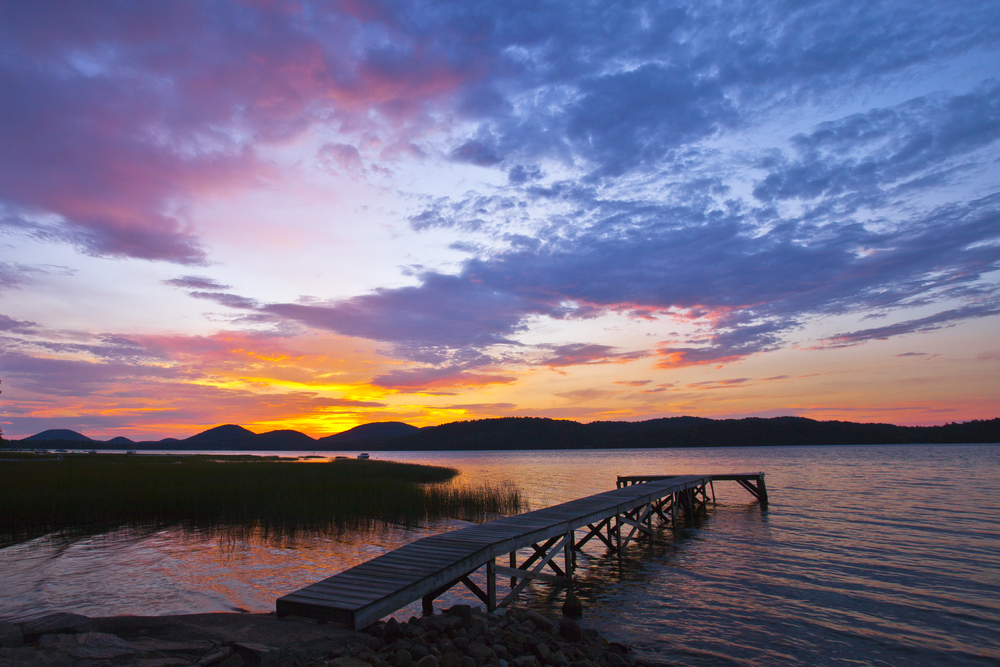 Adirondack Sunrise over a quiet lake via Shutterstock*
Travel

The weather-rounded mountains of upstate New York undulate between hundreds of lakes that dot Adirondack Park like an enormous sea serpent. Anchoring its dusky blue-black tail on the horizon, the creature dips its shimmering green coils into one cobalt pool of water after another as it slithers down the mountains. I followed its serpentine route to the village of Tupper Lake where I dipped my toes into the lake of the same name and stopped to visit The Wild Center, a natural history museum that focuses on one of the world’s critical issues: the coexistence of people and nature.

Clear-cut by loggers in the mid-19th century, the Adirondack Mountains may be the nation’s prime example of the negative impact that man can have on the natural world, as well as a rare example of human actions that have helped nature stage a comeback over the past 100 years. The Wild Center encourages that relationship with interactive exhibits like its Living River Trail, a trout stream that culminates in a waterfall where river otters cavort. One young boy knelt on the floor and pressed his nose to the glass, laughing with delight each time a trout darted by. A giant mound of ice at the Glacial Wall demonstrated how glaciers carved out the Adirondacks at the end of the last ice age. The icy stalagmite was pitted where visitors had pressed their fingers into it; I touched an unblemished area, assuming I could easily leave an impression of my fingertips. Sixty seconds later I withdrew my numb fingers without having made the slightest dent, giving me new perspective on those two-mile thick sheets of ice that disappeared from the face of the earth.

Later that afternoon I drove down the serpent’s spine, past a series of Adirondack Lakes: Lower Saranac, Flower, and Placid, emerging at the city of Plattsburgh and the crown jewel of the Adirondacks, Lake Champlain. I dipped down into the Champlain Valley and pulled into Point au Roche Lodge as the setting sun was igniting clouds in shades of pink and mauve. Because I’d arrived at the B&B after normal business hours, owners Karen and Creston Billings had left a note with directions to my suite and a reminder about their gourmet breakfasts. Tired from a long day of traveling, I dragged my luggage to the end of the hall and stopped dead in my tracks. The door to my room stood wide open, revealing a four-poster king-size bed, fainting sofa, and the largest whirlpool tub I’ve ever seen. A tingle of excitement ran down my spine. A private tub! After six months on the road using shared bathrooms equipped with showers, this was an unexpected luxury. I looked longingly at the tub but decided against firing up the jets that evening; I wanted this bath to be a special event and I was just too tired to enjoy it after my long day. “Tomorrow,” I promised myself.

*Image of Adirondack Sunrise over a quiet lake via Shutterstock