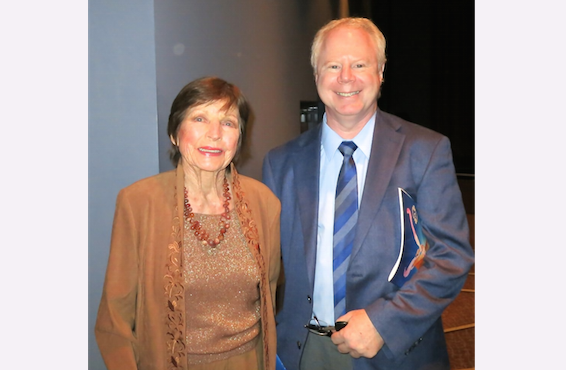 “Loved it,” said Ms. Zeiser, who is presently 91 years old. “It’s just wonderful, just an evening of beauty, in movement and sight and imagination. It’s lovely.”

“She tried to see this two years in a row, and it was sold out both times,” said Mr. Schecter. “So she wasn’t going to miss it this time.”

Shen Yun is a world-renowned performing arts company that was established in 2006 in New York with the goal to revive genuine Chinese culture, steeped in ancient spiritual traditions, according to the company’s website.

A Shen Yun performance features the richly expressive yet gentle and elegant classical Chinese dance. Accompanying the dancers is a unique live orchestra with both Eastern and Western instruments, and a colorful interactive digital backdrop. Completing the experience, are pieces by vocal and instrumental soloists.

Mr. Schecter was incredibly impressed with Shen Yun’s orchestra, saying it was perfect.

“I’m a music producer, so the arrangements were fabulous,” he said. “The blend of East and West was gorgeous, and the conductor was marvelous.”

Ms. Zeiser loved the backdrop and how the artists on stage often appeared to leap into the screen or vice versa, and Mr. Schecter thought the effects balanced well with the dancing.

“The special effects are good but they don’t overwhelm the performers,” said Mr. Schecter. “It’s a good synthesis, a good blend.”

“That’s what I noticed because my wife is an accompanist. Nobody notices the accompanist. She’s really, really good.”

Ms. Zeiser said seeing Shen Yun inspired her to learn more about the history of China.

“It makes one curious to delve into Chinese history,” she said. “It’s very stimulating to the mind as well as the heart, and it’s a wonderful thing to know that beauty is all universal.”

Mr. Schecter was touched after hearing the performance was sold out.

“It’s a sign that people care about beauty, and art, and culture [that] touches the heart,” he said.

“I’m so glad we came,” said Ms. Zeiser. “And we’ll tell everybody else to come next year.”