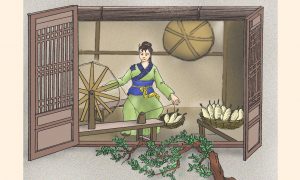 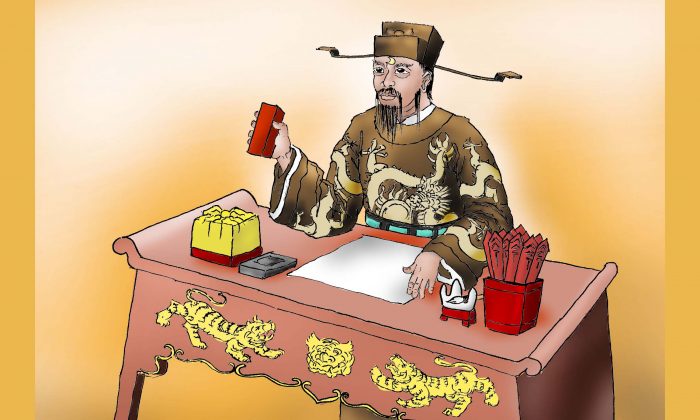 A Yuan Play: Bao Gong and His Dream of Butterflies

Among the plays of the Yuan Dynasty, there was one called “The Dream of Bao Gong Examining the Butterflies Three Times”. It was written by Guan Hanqing (1225–1320), a famous playwright.

In the play, a man by the surname of Wang goes to the market to get some paper and brushes for his three sons. While he is taking a rest, he unwittingly offends Ge Biao, an influential man who is distantly related to the emperor. The latter beats Wang to death in a fit of pique.

Wang’s three sons, Jinhe, Tiehe, and Shihe, burst into tears when they learn about their father’s death. In ancient China, murderers were put to death, regardless of their status. The sons find out it was Ge Biao who beat their father to death. They are determined to make him pay for his crime.

Ge Biao is on his way home and completely drunk when he runs into the three brothers. The eldest brother pummels him and unwittingly kills him. The brothers meant to capture him and hand him over to the authorities. Little did they expect they would end up being locked up in prison by the magistrate of Zhongmu County.

Bao Zheng (999–1062), commonly known as Bao Gong, was the prefect of Kaifeng, capital of the Northern Song Dynasty. In the play, he has just closed a case of horse theft and feels drained. He decides to catch some sleep.

He falls asleep in no time and has a dream. In the dream, he mumbles to himself, “I’m usually busy with work. How would I be able to sleep?” He comes to his garden. It is spring, and the flowers are in full bloom. He walks to the pavilion and sees a spider web in it. A butterfly flies by and gets caught in the web. Bao Gong cannot help but lament: “Death comes to all. Even plants and insects are not spared.”

He is feeling sad when a big butterfly comes along and gets the first butterfly out of the web. Not long after that, another butterfly flies by and gets stuck. The big butterfly gets that one out, too.

Then a third butterfly gets caught in the web. Bao Gong is certain the big butterfly will come to its rescue, but alas, it does not. It just darts from one flower to another and eventually flies away.

All humans are born with compassion. Bao Gong says: “You’re not going to save it? I will.” At that moment, he wakes up from his dream.

Constable Zhang Qian happens to report for work at lunchtime. Bao Gong asks him, “Is there any case I have to look into?”

Zhang Qian tells him about the case of the Wang brothers killing Ge Biao. Bao Gong summons the three Wang brothers and their mother to the court. Bao Gong is an impartial official and never takes a careless approach to a trial, unlike the magistrate of Zhongmu County.

If the three brothers are convicted of homicide, they will be executed. However, they fight to plead guilty in court. Every one of them claims to be the one who beat Ge Biao to death, saying that the other two brothers are innocent. Bao Gong is caught in a dilemma.

The mother explains that the brothers studied the classics and were taught good manners and behavior when they were young. Though the family is not well-to-do, the brothers are dutiful sons. The mother feels that the eldest son, Jinhe, should not be put to death for killing Ge Biao. She says Jinhe is a dutiful son, and if he were dead, there would be no one to provide for her. She says the second son, Tiehe, is the family’s breadwinner and should also be spared. However, she agrees to putting the youngest son, Shihe, to death.

Bao Gong is puzzled. Could the youngest son be her stepson? Is that why the mother agreed to let him be executed? Bao Gong feels rather sad. When he inquires about it, the mother explains that the youngest son is actually her biological son. The two elder brothers turn out to be adopted sons. The mother does not want to be a jealous and wicked woman, but a woman of virtues. She pleads for mercy for her two adopted sons.

Bao Gong relates the case to the dream he just had about the three butterflies. It strikes him that the dream was a pointer from Heaven for him to save the third son.

He reports the case to the imperial court. The emperor pardons the three Wang brothers and even puts them in important positions. Jinhe is made an official in the imperial court, and Tiehe is also given a position. Shihe is made the magistrate of Zhongmu County. The title “Lady of Virtue” is bestowed on their mother. The imperial court respected virtuous women and dutiful descendants.

*Tao Kan was a famous general during the Eastern Jin Dynasty. His mother, Zhan, was among the Four Great Mothers of ancient China. She set an example for Tao Kan by rejecting a jar of marinated fish which was meant to bribe Tao Kan.

Meng Guang was an ugly and fat woman who insisted on marrying Liang Hong, a virtuous man.