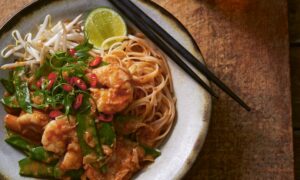 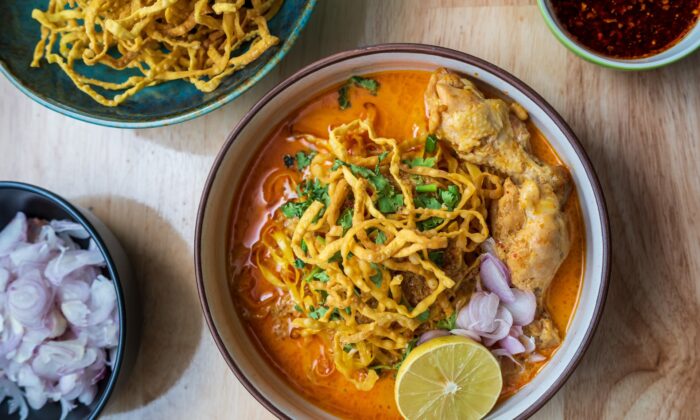 Khao soi is served with springy egg noodles and an assortment of toppings, including a crown of crispy fried noodles. (Sumate Treekajornsak/Shutterstock)
Recipes

The rich, golden curry is a Northern Thai specialty you can make at home
By Kevin Revolinski
biggersmaller
Print

Growing up in a small town in the Midwest, my only understanding of curry was the yellow powder in a standard issue wedding-gift spice rack. That powder originated in India, a combination of seasonings that were meant to travel well and mimic fresh curries. Many British returning to the British Isles from the then-colonized subcontinent hoped to bring home flavors they had grown to love.

I never really had a hankering for the blend, and wrongly understood “curry” to mean just that. Years later, the world of curry as a broader category of dishes opened up to me. I learned that Indian, Thai, and Japanese curries existed, and bore little resemblance to the golden powder. My favorite of them all, perhaps, is often referred to as Northern Thai curry.

Khao soi, a yellow, rich, soup-like sort of coconut milk-based curry, is a popular dish in the Chiang Mai region of Thailand. It’s typically made with chicken (gai), but also beef in some cases, and served with springy egg noodles and a crown of crispy fried noodles on top. Its spice-heat is fairly mild, typically, but it isn’t to be confused with the equally yellow curry from the south, which is often blisteringly hot.

Ironically, a cooking class in Krabi, a province in the south, is where I first learned to make a couple of common Thai curry pastes, the so-called red and green, themselves varying in recipe depending on whose kitchen you are in. The golden khao soi actually begins with the basic red paste (prik gaeng kua); its yellow color comes from curry powder and turmeric.

If you are deep into DIY here, by all means, you can make your own curry paste at home, gathering a long list of ingredients that includes chiles, garlic, galangal, and … shrimp paste, an essential, odiferous umami bomb you don’t want to have left over in the back of the fridge unless you have hazmat protocols. The process is time-consuming more than anything. Don’t feel like you are cheating if you buy the paste pre-made: In Thailand, home cooks often buy the paste at a fresh market, where it is shaped into large mountains and is priced by the kilo.

Red curry paste is standard in most Asian groceries—Lobo and Mae Ploy brands, for instance. If you get to Thailand (or find a good importer), look for a brand called Nam Jai. I can always find pastes with no preservatives and an ingredient list that is entirely made up of actual foods—even without MSG, if that is not your thing. A single 100-gram packet of paste is perfect for a batch that serves four. But different brands may come in varying amounts, so you may need to adjust in the recipe below, based on their suggestions on the packaging.

There is a learning process with curry paste. Determine if it carries the spice level you desire, and adjust as needed. You can always add a couple of chopped Thai chiles to the paste when you first melt it into the coconut milk. Roasted or dried chilies added in mid-cooking can help, too, but be careful, as they can get pretty spicy.

My wife leaves the chiles whole or halved. I prefer to mince them completely and add them at the beginning, so that the heat spreads evenly. My belief is I get more heat from fewer chiles this way (scientific studies still pending). They freeze very well, and I have a good supply at all times.

Chicken legs are the most common form of meat for khao soi, but I chop up breast and thigh meat. Beef is an option, as are vegetarian alternatives, such as mushrooms. Chicken of the woods (a foraged, wild mushroom) is fantastic. Vegetarians, be aware of the shrimp paste and fish sauce.

In a perhaps blasphemous attempt to make my curry a bit healthier, I add broccoli. But steam it first and add it after cooking the khao soi separately, so its sweetness doesn’t change the curry flavor.

Khao soi is served with egg noodles. Buy them fresh, dried, or even frozen. I like Twin Marquis, a U.S.-made brand that comes frozen at local Asian markets, in packs of four servings, ready after two minutes of boiling. In desperation, we’ve used linguine.

In a large pot or wok over medium heat, add the curry paste, Thai chiles (if using), and enough coconut milk to dilute the paste and melt it, so that it releases its aromas. Do not burn it!

Then add 1 cup of coconut milk and let that mix in and start to bubble. Stir in the palm sugar, curry powder, and turmeric powder, and then add the remaining coconut milk, chicken broth, and meat. Turn the heat down a bit to let it simmer for another 15 minutes. Add the fish sauce to taste. It should be a little salty, not bland.

Prepare your noodles according to package instructions, distribute them among four bowls, and ladle in the curry.

Now comes the fun part: Accessorize! Top each bowl with thinly sliced shallots, chopped pickled mustard greens, and a squeeze of fresh lime. Add a bit of cilantro strewn on top, along with some crispy fried noodles for crunch.

Note: I haven’t found a satisfactory packaged option for crunchy noodles (similar to chow mein noodles), and typically will fry up fresh noodles myself. Start with cheap dried egg noodles, cook them, and pat them dry. Heat about an inch of oil in a deep pot until very hot, then place the cooked noodles, one serving at a time, in the oil in a loose tangle; they’ll crisp right up. Any moisture in the noodles will spatter up, so use a screen for the pot. Use tongs to turn the mass of noodles over once, and then, once they’re light golden brown, to pull it out and lay it on paper towels to drain.

Does it all sound complicated? Be patient: It’s worth it!