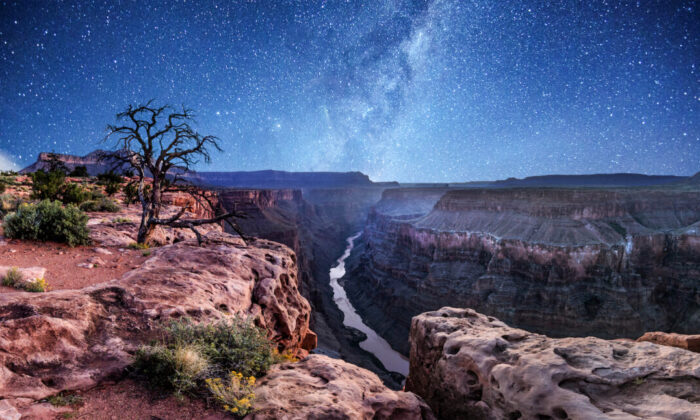 A Sea of Stars: Dark Sky Designations Recognize Places That Preserve the Darkness of Night

I pulled into the Newport State Park parking lot in Door County, Wisconsin, a few hours after the late fall sunset when there wasn’t a soul around. The park along the shore of Lake Michigan was as dark as midnight, I thought, until my eyes adjusted to the world without headlights, and then what I saw made me dizzy. Stars so bright and so close that they seemed just beyond my fingertips, and if I stared into them long enough, I felt drawn in and off balance. One can lie flat on the earth and imagine looking down from a height at a sea filled with bright diamonds below and a riptide of light that is the Milky Way.

That sea of stars has fascinated us from time immemorial, spawning gods and myths, holding the souls of our departed, and guiding us across land and sea through the darkness. Invisible in the daytime but always there, pulling at our imaginations with their myriad gravities, the stars are part of our human heritage. Now try to imagine children or even adults who have never even seen them.

A Different Kind of Pollution

“Over 80 percent of the world’s population—and that increases to 99 percent of the United States and European populations—lives under polluted skies,” said Ashley Wilson, director of conservation at International Dark-Sky Association (IDA), a nonprofit based in Tucson, Arizona. She’s referring to light pollution, the stray rays from street lamps and buildings that are collectively so powerful they cause the undersides of the clouds to glow. Even in the heart of a national park wilderness, one can look at the horizon and know where the next little town is.

IDA was founded in 1988 by David Crawford, a professional astronomer, and Tim Hunter, an amateur astronomer, who were part of a star-gazing community frustrated by growing light interference with their observations. But at the northern end of the state, a similar group got its start three decades before. Once known as the Skylight City, Flagstaff is home to both the Lowell and the U.S. Navy Observatories. In 1930, Pluto was discovered by telescope from there, as was its moon Charon, decades later.

Recognizing the scientific importance and quality-of-life factors, Flagstaff residents, local government, and the scientific community came together, and in 1958, they enacted the first city ordinance aimed at light pollution, specifically, a prohibition of search-lights (common in advertising) that could be seen from more than a half-mile away. Running afoul of the rule was a misdemeanor punishable by fines or even jail time. In 1972, ordinances dictated that area lights had to be directed downward. Today, Flagstaff’s own Dark Skies Coalition continues that fight for the dark side.

At the time of writing, the IDA’s list includes 183 places in 21 countries, with 120 of those being in the United States. The association lists each site as a Community, Park, Preserve, or Sanctuary, or even an Urban Night Sky Place, a “municipal park, open space, observing site, or other similar property … near or surrounded by large urban environs whose planning and design actively promote an authentic nighttime experience in the midst of significant artificial light.”

A paddler’s dream, the Boundary Waters Canoe Area along Minnesota’s border with Canada is a Dark Sky Sanctuary, according to the IDA definition, a reserve “situated in a very remote location with few (if any) nearby threats to the quality of its dark night skies.”

Making the list international is slower going, as standards and procedures vary greatly in the international community. IDA’s first international Reserve was Mont-Mégantic in Quebec, an area that includes the communities of Granit, Haut-Saint-François, and Sherbrooke, as well as the namesake national park and its famous observatory. Other sites can be found in Germany, France, Namibia, New Zealand, the UK, and several other nations. And as light isn’t restricted by political or geographic boundaries, the IDA welcomed the border-straddling Waterton-Glacier International Peace Park in Montana and Alberta, Canada, adding it as a Dark Sky Park in 2017.

The Light That Blinds

Many city dwellers can still see at least some stars, but contrary to Carl Sagan’s famous “billions upon billions” of them, the number may be much more easily counted. If you haven’t ever seen the stunning spread of the Milky Way, you haven’t been under a dark sky. Even a small town’s lighting can overwhelm our view of the magnificent galaxy we occupy, and yes, there are actual billions there.

One might think a place such as the Grand Canyon must have been a shoo-in. It applied for certification in 2016 but didn’t get it until three years later. The process required a lot of work, money, and planning, including retrofitting more than 5,000 lights.

“In the United States alone, about a third of our light is wasted: there’s no use for it, it’s too bright, it’s in places where it doesn’t need to be,” said Wilson, who has a masters degree in sensory ecology, a field that looks at how animals interact with their environment and how cues such as light and noise affect their behavior.

Wilson noted IDA’s cooperation with the Florida Fish and Wildlife Conservation Commission to address beach lighting that misleads sea turtle hatchlings away from the sea and toward certain death.

Mexico and France already have national guidelines to combat light pollution, and Croatia has them in development. To increase public awareness, Utah, Colorado, and Michigan have Dark Sky Months. Pittsburgh and Salt Lake City have revised light ordinances.

“With any issue, the most important thing is education and raising awareness,” Wilson said. “So keep having this conversation with your neighbors and other people in your community.” Step one is “getting everyone to understand first that light pollution is a problem.”

The typical response to dimming or even removing lighting from urban spaces is a concern about safety. There’s no clear connection between darkness and crime. A brightly lit parking lot can actually create deep shadows along the perimeter. Vandalism and graffiti are assisted by light. And even just redirecting lights to where they matter can minimize the pollution. Think of footpaths with light aimed toward the feet but shielded from the sky (and your eyes).

Currently, the IDA has 50 applications for Dark Sky certification in progress, and another 60 groups are just getting started. The process typically takes one to three years.

“Of all the problems we’re faced with today, light pollution has the most tangible and clear solution to it, and everybody can have an impact and make it different. At the visual level, it’s turning off lights you don’t need. Can you add a shield? Can you lower the amount of blue wavelength by having ‘warmer’ fixtures? Can you use motion sensors so the light only turns on when you need it?” Wilson said.

Don’t believe it? Go spend some time in a dark sky place and imagine if you could have that magical light show every night in your backyard.