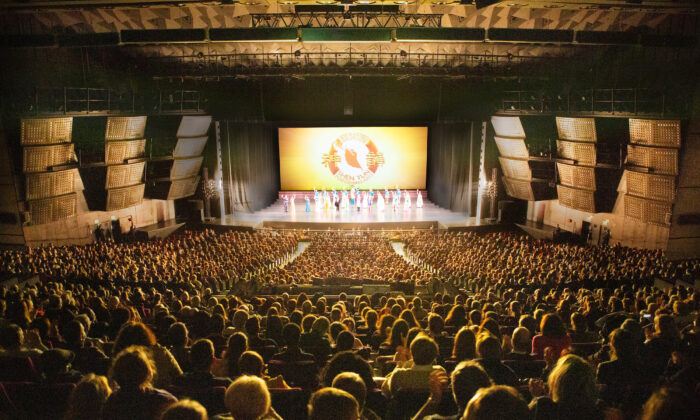 PARIS, France—Courbevoie mayor Jacques Kossowski was a happy man on Jan. 15, 2022. “My Santa Claus was very kind to me,” he said with a smile as he and his wife were being interviewed by NTD after the Shen Yun performance at the Palais des Congrès in Paris.

The mayor had granted himself two hours of escape to discover the 5,000 years of traditional Chinese culture presented by Shen Yun, a New York-based classical Chinese dance company whose international tours spark joy in audiences each year.

As the mayor of Courbevoie for 27 years, Mr. Kossowski paid tribute to the divinely inspired values of ancient China, which are central throughout Shen Yun’s program.

It is “a pity that Shen Yun cannot be performed in China,” he said, alluding to the fact that despite being the premiere Chinese culture stage performance in the world, its outspoken advocacy of human rights has resulted in it being banned.

“It would give so much pleasure to all the Chinese who are of a certain age, it would be wonderful,” he added. “For the youth, it means, ‘Let’s not forget the past, let’s keep the past!’ We are lucky to have this future, but it’s because of this past. … If we are lucky enough to be in this country today or elsewhere, it is because we have traditions, let’s keep them! This does not prevent us from evolving.”

Courbevoie is one of the most influential cities in France, due to the presence of the district of La Défense, which includes the headquarters of some of the largest national and international companies.

“The quality is remarkable! Frankly, it’s remarkable! There is not even one bad step! And when you see the cohesion of these dancers … How many years of work did it take, 15 years, 20 years of work to get there … They had to start at 4 or 5 years old to reach this level of perfection!”

As for Mrs. Kossowski, she was particularly pleased with the live orchestra, which blends Chinese and Western instruments. “He was the one who was very interested in this show,” she said. “But I must admit that I was pleasantly surprised, much more than I expected. I really enjoyed the storylines, all the tales, the stories … every show has a story!”