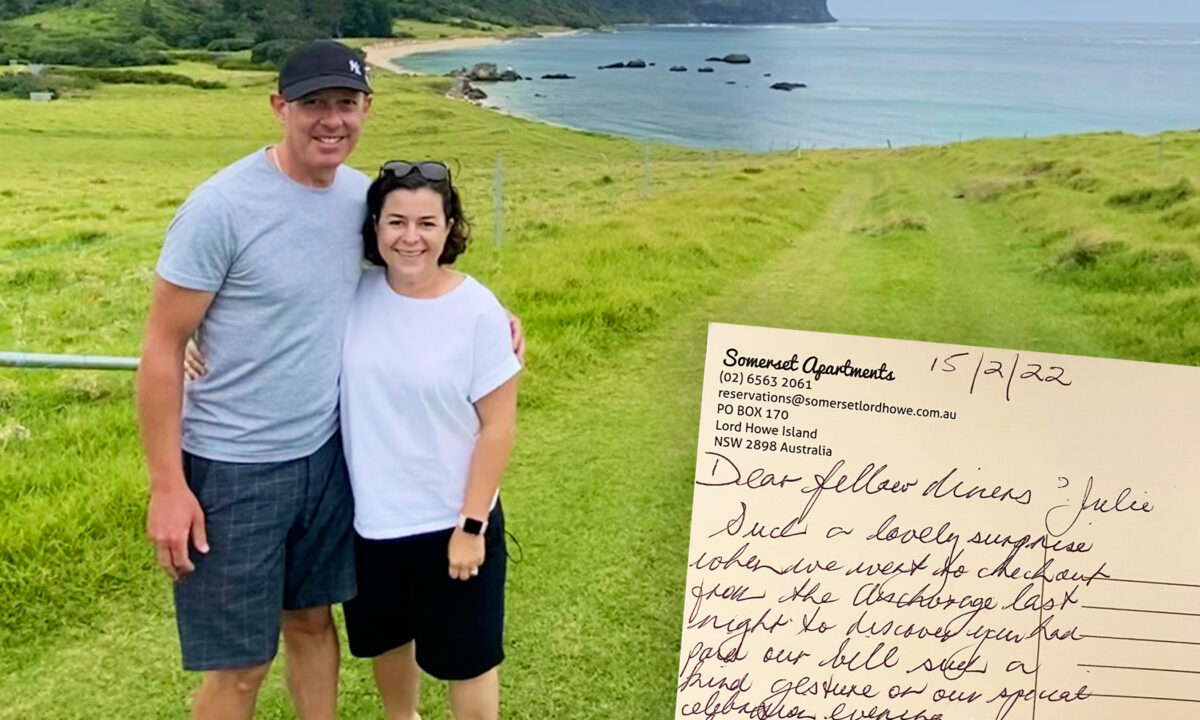 In February, Julie and Steven McMaster were celebrating 20 years of marriage at a Lord Howe Island restaurant  and happened to be seated next to the elderly pair who were celebrating their 60th anniversary. Julie, 45, began chatting with the older woman and found her to be really friendly and lovely.

Touched by their kindness, and witnessing their beautiful relationship, Julie was reminded of her own parents with whom she was really close, she told The Epoch Times.

Witnessing their love for each other struck a chord with her. She told her husband that she wanted to anonymously treat the elderly couple to their 60th-anniversary dinner, a kind gesture that she hoped would make the celebration sweet and unforgettable.

Steven was onboard and considered it a great idea.

“They just seem like such a lovely couple,” Julie said. “I just wanted to do something that would hopefully make it just a little bit more special.”

Later that evening, Julie approached the waitstaff and arranged to cover the check. To her surprise, she learned that it was not just the couple’s 60th anniversary, but also the elderly woman’s birthday. Soon, candles were lit and the crowd in the restaurant were singing “Happy Birthday.” It was not until then that they found out that the elderly woman’s name was Helen.

In a string of seemingly happy coincidences, when the McMasters returned back to their room that night, Julie realized something else.

“I follow Lord Howe Island’s tourism social media accounts on Facebook and Instagram,” Julie said. “It just dawned on me that I remembered seeing a comment from a lady who had mentioned that she would be celebrating her 60th anniversary, and I quickly grabbed my phone.”

Upon finding the post, Julie was happy to know that the woman’s name was Helen.

In a moment of absolute astonishment, Julie told her husband about the surprising coincidence. Although at dinner she hadn’t connected the dots, she was still shocked to know that the woman whose comment she had come across two weeks ago was sitting right beside her and her husband at the dinner that night.

While this was not enough to blow her mind, at that time, Julie’s husband played a random Spotify playlist on their Bluetooth speaker and the song they heard was “Happy Birthday, Helen,” by an Australian band, Things of Stone and Wood.

The next day, although Helen and her husband, Robert, had left, there was a handwritten note waiting for the McMasters with the restaurant staff.

While Julie and her husband had intended to pay anonymously for the couple’s meal, it seems that Helen and Robert had found out about their kind gesture.

In the note, they thanked the couple for their “lovely surprise,” on their special celebratory evening.

Julie, seeing beauty in the strange events, later shared her anecdote on Facebook, writing: “I really felt like there was a higher power at work somehow.”

Her post resonated with netizens, who were touched by the couple’s generosity. They have since garnered touching and congratulatory comments from many. The McMasters didn’t want praise for their kind act, Julie told The Epoch Times, but they hope that it might inspire other people and motivate them to do the same.

With all the blessings she has in her life, Julie finds that if she can do something to connect with other people and demonstrate a little bit of kindness, it is well worth the effort, especially at a time when so many people have faced the difficult period of being isolated from their family and loved ones.

“Just think a little bit of kindness can go a long way,” Julie said. “You know, nobody knows what people are going through, or, you know, what battles they’re fighting.”

If a simple act of generosity or kindness “brings a bit of happiness or a bit of joy, then why not?”