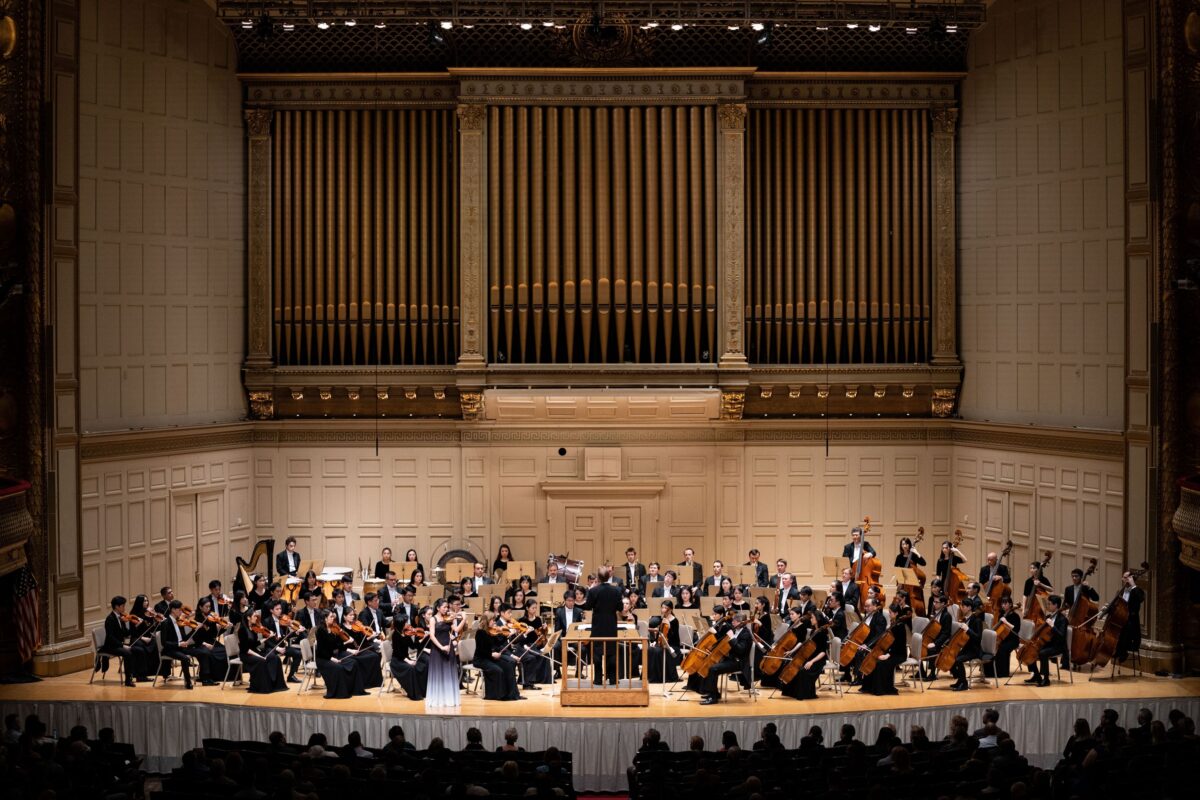 A New Frontier in Classical Music

Once, at a classical concert, a man sitting the row in front of me in the orchestra level of Carnegie Hall got up for a standing ovation and stood there in almost reverent contemplation long after the musicians had left the stage for intermission. He had been moved to tears.

Seeing the curiosity in my expression, he said, “It took Haydn two hours to render the story of Creation. It took him 12 minutes! Bravo! Bravo.”

The concertgoer was referring to a new composition by the artistic director of world-renowned Shen Yun Performing Arts, the New York-based premier classical Chinese dance company. It had premiered that season at a Shen Yun Symphony Orchestra concert—a rare opportunity to hear the company’s unique East-West orchestra and original compositions unaccompanied by dance.

The original music tends to surprise lovers of classical music. It’s new yet tonally traditional and euphonious. There’s a positivity that leaves listeners wondering where these musicians come from and how they’re able to accomplish such a feat.

“Right now, we are the only orchestra in the United States that has successfully mixed traditional Chinese instruments and original Western symphony orchestra instruments,” Shen Yun conductor Milen Nachev said in a video introduction.

An orchestra is one of those entities whose total is much greater than the sum of its parts.

The music is traditional in the sense that the melodies are often ancient Chinese melodies. The music comes from ethnic folk dances that rely on the traditional tunes of the Yi, Tibetan, or Mongolian peoples. But the music is also traditional in a Western classical sense, in tonality and arrangement. With two sets of traditions, one from the West and one from the East, one may imagine that the work is doubly restricting for a performer. But in reality, “it’s because of that … you will be able to aspire to something higher,” Liang said.

Listening to the works herself, Liang can feel a spiritual component innate to the music.

“Some audience members gave us feedback that they felt the inner meaning of Shen Yun’s music is so deep that it’s as if it encompassed the whole universe,” flute player Lee Chia-Jung said.

It was an epiphany for Lee. Later, a professional musician friend of hers attended a concert and afterward told her how much he enjoyed the clean field of sound in which he was immersed.

“I told him that we all abide by the principles of truthfulness, compassion, and forbearance in living in society and interacting with people. He said he could feel that energy coming from the music,” Lee said.

Shen Yun is a performing arts company with its hopes set on reviving traditional culture, and as such their own artists follow a traditional path that includes cultivating kindness and mindfulness, as well as holding the ardent belief that art has the power to elevate humanity. This lifestyle is as much a daily practice for the musicians as their rehearsals, and by extension, it’s communicated through their performances.

“Before, I would be very impatient when I performed music. I would also feel tense when playing my instrument,” cellist Huang I-Chen said. “But in the process of performing with Shen Yun, I found that the more calm my heart was, the more I let go of things like fame and fortune, I would improve in making music.

“I would like to present to the audience members music that is truly beautiful and traditional.”

“Shen Yun also helps you to improve as a human, in being more collaborative, being more tolerant, and being more friendly with people, more able to help people,” she said.

“And that definitely comes out, because when you’re on stage, that unity is something that you can’t fake,” timpanist Brian Marple said.

The idea of this positive synergy has its roots in ancient Chinese culture as well.

“In Chinese culture, there are a lot of sayings about music, like ‘virtuous music nourishes people’s souls,’ and it gives people guidance or connection with nature,” said Chen Ying, a conductor with the company. “In ancient times, people perceived nature to have spirituality, with their connection to the heavens.

“I think from the time that music was formed, it resonated with the body, heaven, and earth.”

The Process Behind the Music

Every year, Shen Yun produces a new program of 20 or so dance pieces, and during the process of choreographing these pieces, the music is written in tandem. And before any of that happens, the composers, arrangers, choreographers, and set and costume designers come together to find the idea behind each piece. The dynamic process ensures that every note, all the phrasing, and the arc of the music match exactly what the artistic director, Mr. D.F., envisions for the story that will come to life on the stage.

“In ancient Chinese times, people also believed the ideas behind the music were more important than what’s on the surface,” Chen said.

In one piece, the music might convey the sweeping grandeur of the Tang Dynasty. In another, it could be an otherworldly serenity accompanying a dance set in the heavens. It could be humorous, provoking the audience to laughter just as much as the characters’ antics on stage—or so heartbreakingly tragic that the viewers are moved to tears.

“I believe our music tries to warm and uplift people’s hearts. It has something to do with our belief in the function of music. What music is meant to be is … something positive for people. It comforts them and soothes them, or it inspires them and encourages them,” Chen said. “At our symphony concerts, so often people tell us they were moved to tears, and we just feel that their hearts were touched. The messages we try to give them are positive ones and are genuine and powerful because it comes from kindness and sincerity.”