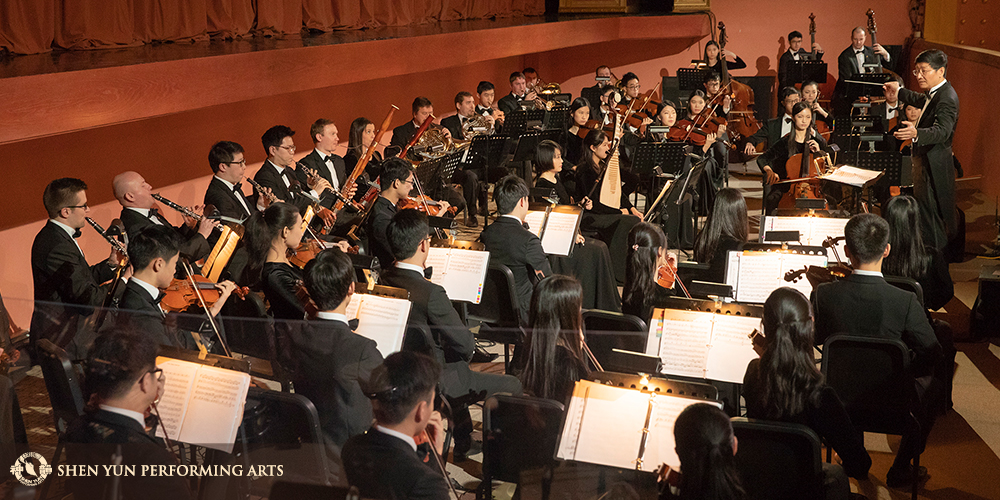 Why Shen Yun’s Music Resonates With Our Souls

Harnessing the power of music to inspire
BY Catherine Yang TIMEJanuary 17, 2021 PRINT

Shen Yun Performing Arts famously uses a unique ensemble, blending sounds and instruments of the East and the West, but what truly makes the music special, says conductor Chen Ying, is the meaning behind the music.

“I believe our music tries to warm and uplift people’s hearts. It has something to do with our belief in the function of music. What music is meant to be is to be something positive for people,” Chen said.

“It comforts them and soothes them, or it inspires them and encourages them,” she said. “So in terms of what we try to accomplish with our music, it’s pretty different from many other methods that are just trying to do … something unconventional or something other people haven’t done before.”

Even before a single note is written, the composers and arrangers work with the choreographers and designers to find an idea. Then, from the arrangement to the performance, from the tone colors to musical architecture, the conductor works to shape everything in pursuit of an artistic idea that is truly beautiful, positive, and can be transported to the audience.

Much of this beauty stems from tradition, Chen said. The unique ensemble is in effect an homage of the best of the Eastern and Western cultures, and Shen Yun seeks to cherish and convey the traditional values found in the best of these cultures.

A Connection to Something Higher

Music has its beginning in sacred spaces. Whether in the East with the music of sages or in the West with our Gregorian chants, music has for centuries been used to convey a reverence for the heavens, express human emotion, and connect with the world around us.

“In Chinese culture, there are a lot of sayings about music, like ‘virtuous music nourishes people’s souls,’ and it gives people guidance or connection with nature,” Chen said. “In ancient times, people perceived nature to have spirituality, with their connection to the heavens.”

“I think from the time that music was formed, it resonated with the body, heaven, and earth,” she said. Whether it be singing or playing tunes on a bamboo flute, music was meant to aid in the connection between heaven, earth, and humankind.

In the West, chants and hymns began in spiritual settings, used to convey appreciation for divine protection and the relationship between humans and the gods who watched over them.

“I believe in probably most cultures, music was originally for communication, a way in which people communicated the divine sense of gods in their hearts,” Chen said.

A beautiful musical experience can feel timeless, evoke awe, and even move us to tears.

“That view was lost in the last several decades,” Chen said. “But I think the musicians and other artists at Shen Yun really share this vision, or mission, to restore those treasures from the past and bring back the tradition, the positive role that music can play in people’s lives.”

The artists at Shen Yun don’t just believe this traditional philosophy of music, they live it, Chen said.

“We believe that to be a true artist, a good artist, we believe it’s important to improve ourselves as a person,” she said. “To become a more virtuous person. Even in ancient China, people believed that all the great masters were extraordinary persons as well; their character and integrity would come through in their artistic work.”

Chen believes the pure thoughts and energy the artists put into their work comes through in each performance—that this is why Shen Yun has been so well received worldwide by audiences, no matter their background or culture.

“At our symphony concerts, so often people tell us they were moved to tears, and we just feel that their hearts were touched,” she said. “The messages we try to give them are positive ones, and are genuine and powerful because it comes from kindness and sincerity.”

The conductor’s role is a dynamic one.

While the task of combining two very different musical languages may be a Herculean one for arrangers, and playing the incredibly precise music a challenge for the musicians, the conductor, in a way, gets to reap the rewards with a powerful, versatile ensemble at her fingertips.

“This orchestration remarkably expands our orchestra’s palette of tone colors and versatility, stylistic capabilities, and vigor,” Chen said. “The fact that we integrate Chinese instruments—pipa, erhu, the percussion—gives us the ability and versatility to tell these stories very vividly and authentically.”

Then there’s the timing because all of it—the animated backdrop, the lighting, the choreography on stage—depends on the precision of the musical tempo.

“I really feel privileged and honored to do something like this because I truly love and admire the music of Shen Yun. To have the opportunity to use my skills to help bring this music to life and present it to the audience is just unbelievable. I feel unbelievably fortunate to do this, because of the idea behind the music.”

“In ancient Chinese times, people also believed the ideas behind the music were more important than what’s on the surface … and that’s why I love Shen Yun music so much. It’s very inspiring and powerful—invigorating at the same time. It can be humorous, it can really cheer people up.”

“It all ties into this mission to celebrate the best of humanity, both East and West, the values and the heroes from the past, or even today.”