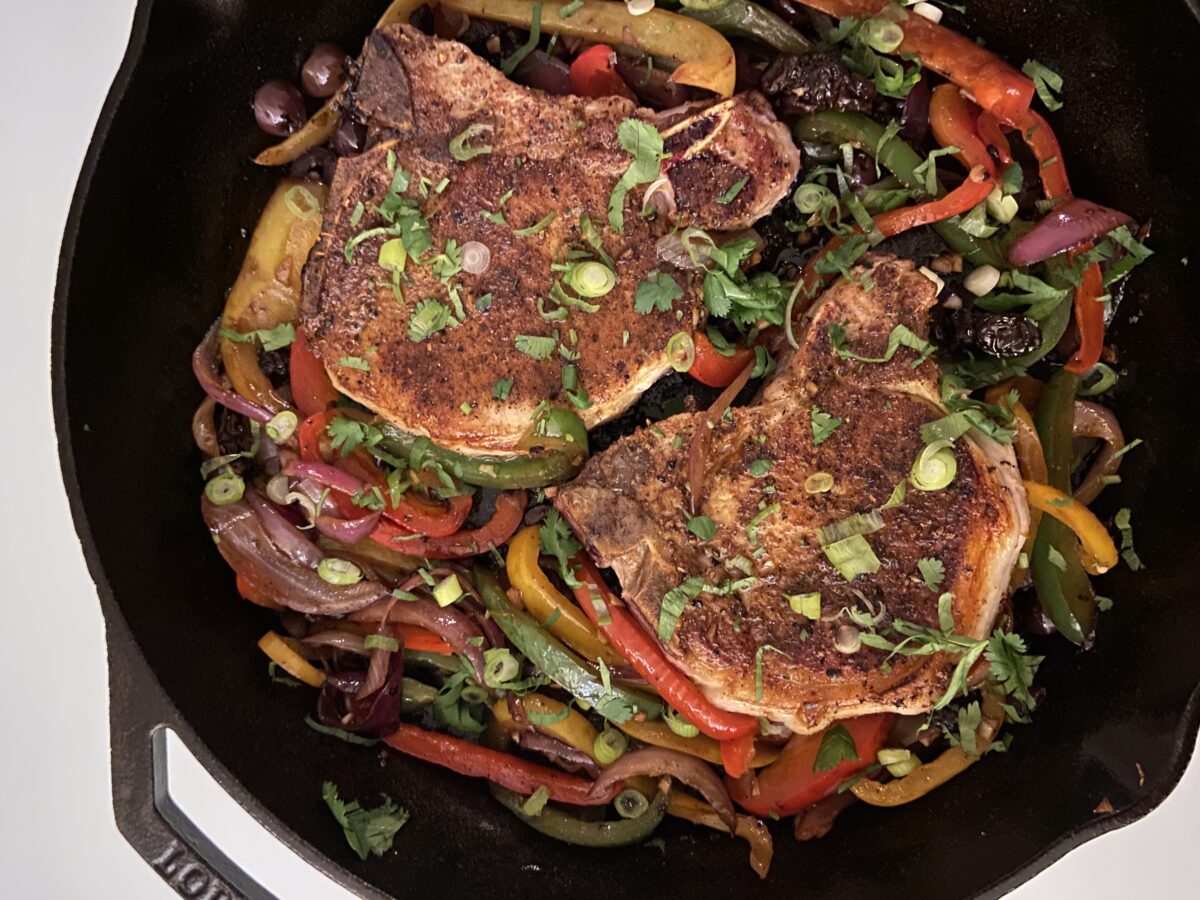 You can serve this dish hot from the pan. (JeanMarie Brownson/TNS)
Food

A Cast-Iron Skillet Is Perfect for Pork Chops

If you only own one pan, make it a cast-iron skillet. This versatile pan will serve you well, from making breakfast pancakes to griddled sandwiches to main-course meats and vegetables.

The most important technique when cooking in cast-iron is to heat the pan well before adding anything, including oil. The hot surface prevents food from sticking, basically creating a nonstick surface. Once the pan is hot, add a little oil (less than you think) and then the meat or vegetables. There’s no need to use high heat with cast-iron; it conducts heat so well that medium heat is almost always just right for browning chops and searing vegetables.

I like to pair ras el hanout, a Moroccan spice blend made with cinnamon and cumin, with the dark flavors of browned meat, raisins, olives, and rich balsamic vinegar. Here, the blend seasons pork chops destined for a pile of sauteed peppers.

Mix ras el hanout, salt, and pepper in a small dish. Pat pork chops dry, then season generously on both sides with about 2/3 of the salt mixture. Refrigerate chops, covered loosely, up to 24 hours.

Set a 10- or 12-inch cast-iron skillet over medium heat. Let the empty pan heat until drops of water sizzle on contact. Add 1 tablespoon oil and swirl to coat the pan bottom, then add the onions and peppers. Cook, stirring often, until peppers are crisp-tender, 5 to 6 minutes. Stir in raisin mixture. Cook 1 minute, then transfer to a bowl.

Reheat the pan if necessary, then add remaining 1 tablespoon of oil. Add pork chops in a single, uncrowded layer. Cook, without turning, over medium heat until bottoms are beautifully bronzed, about 6 minutes. Flip and brown the other side, about 4 minutes. Remove to a plate.

Pour vinegar into pan and heat to boil while scraping up browned bits from bottom of pan. Swirl in the butter and when it’s melted return the pepper mixture to the pan. Nestle in the pork chops. Remove from heat. Garnish with herbs. Serve hot from the pan with cooked polenta or egg noodles.

JeanMarie Brownson
Follow
JeanMarie Brownson is a James Beard Award-winning author and the recipient of the IACP Cookbook Award for her latest cookbook, “Dinner at Home.” JeanMarie, a chef and authority on home cooking, Mexican cooking and specialty food, is one of the founding partners of Frontera Foods. She co-authored three cookbooks with chef Rick Bayless, including “Mexico: One Plate at a Time.” JeanMarie has enjoyed developing recipes and writing about food, travel and dining for more than four decades. ©2022 JeanMarie Brownson. Distributed by Tribune Content Agency, LLC.
SHARE
Friends Read FreeCopyFacebookTweet
You May Also Like