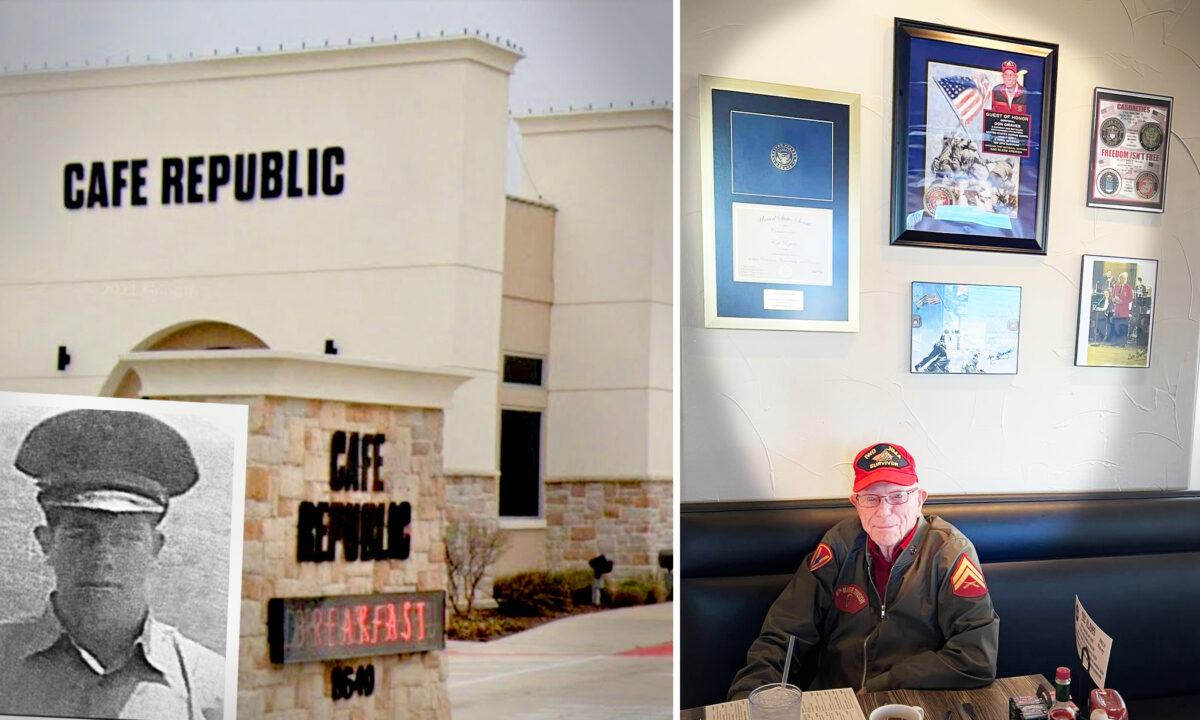 97-Year-Old Marine Who Survived Iwo Jima Walks Into Cafe, Tells His Stories—So They Give Him His Own Table

The Cafe Republic on North Beach Street in Fort Worth holds a special place for someone who once prayed on a beach during the Battle of Iwo Jima.

That someone is Don Graves, 97, who joined the Marine Corps in 1942 at age 17, before shipping off to fight alongside 335 other Marines, of whom only 18 came off the island.

In his 2nd Battalion, Graves was the only flamethrower to survive.

He started coming into Cafe Republic in 2019, soon after owner Jimmy Arta Pollozani first opened its doors, the proprietor told The Epoch Times.

The local war hero stops by every day—on a diet day ordering an English muffin and fruit, but also loving his classic benedict, bacon, and eggs.

“We recognized that he always wore his hat that says ‘Iwo Jima Survivor,’ and we started asking him about it,” the owner said.

“We got to sitting down and got to discussing about his service in the military, and Iwo Jima, and all that stuff.”

In his honor, they hung above his table pictures of Graves in the military, the battle of Iwo Jima, and flag-raising.

A history buff, Pollozani gleaned that Graves, growing up in Michigan, first tried to join the Marines at age 16 because of the attack on Pearl Harbor, but was rejected because of his age.

On his birthday six months later, he signed up.

“We got to respect our military veterans, especially Don Graves, because he’s a flamethrower,” said Pollozani, a police officer. “The life expectancy of a flamethrower was like 13 minutes.

“He’s well known within the DFW region here at Fort Worth, and people have a lot of respect for him.”

Graves once lugged a 72-pound flamethrower onto that nasty beach with a Marine on either side to assist, the survivor recalled. His task was to take out pillboxes where the enemy was fortified.

“We couldn’t move, we couldn’t get up,” Graves said. “The kids were getting killed. Every time they would go over the top, they’d drop.”

It took three grueling days to reach their goal: Suribachi, 540 feet away.

Graves saw the iconic Iwo Jima flag raising, said goodbye to his friends, and shipped off the island.

Of the prayer he uttered on the beach, Graves recounted: “I put my face in the sand. I said, ‘God I don’t know much about you. But if you can do for me what people tell me you can, I will serve you the rest of my life.’”

He did just that. Returning home and then getting laid off from a refrigeration factory, he joined a ministry and served the church for 32 years.

Some 70 years after that prayer, Graves walked in to Cafe Republic and told his story of sacrifice and patriotism—how he and the kids he fought alongside did so for love of country and the American flag.

Last year, the Cafe helped Graves celebrate his 97th birthday and had a massive turnout.

“The guy’s [almost] a hundred years old and just a strong guy,” Pollozani added. “They don’t make guys like that anymore.”