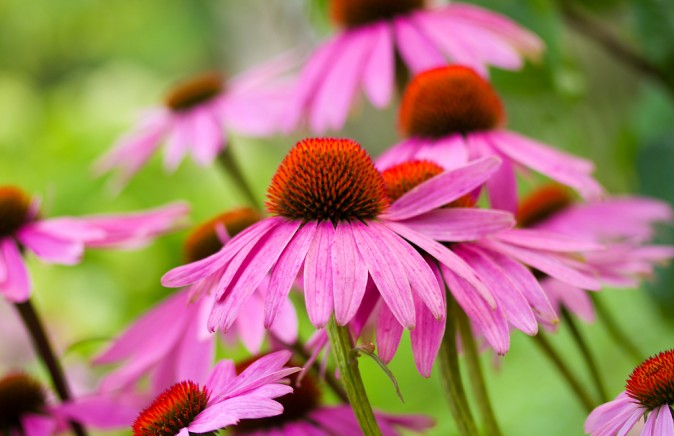 The immune system is complex, diverse, and truly amazing! It consists of numerous antibodies, white blood cells (and other cells), organs, lymph nodes and vessels, bone marrow, and other tissues. Its task is clear and complicated: protect the body against harm from the bad guys, whether they be bacteria, viruses, fungi, parasites, physical trauma, countless toxins from food and the environment, and other nefarious agents. To help with that goal, we often turn to nature, and more specifically, our herbal friends.

The following 9 herbs are among the more potent ones that can be used to help support, protect, and boost the immune system. You can consider taking immune-boosting herbs before and during cold and flu season or as a daily practice to help maintain an optimal functioning system throughout the year. The good news about some of these herbs is that they can be included as part of your diet—protecting your immune system can taste great too!–as well as taken as supplements. In both cases, choose organically grown herbs whenever possible.

Astragalus is known as an adaptogen, which means it helps the body fight off stress and returns it to a state of balance. Since stress is a significant factor in compromising the immune system, use of astragalus and other adaptogen herbs can be instrumental in boosting immune function. Scores of studies have examined the impact of astragalus on immune function, including one in which scientists showed how the herb can suppress inflammation and control various T cells, which in turn has a positive impact on immunity.

The petals of the calendula flower, aka pot marigold, have a long history of use for healing. Calendula has antiviral, anti-inflammatory, antibacterial, and antioxidant properties that can be enjoyed in various forms, including tinctures, teas, ointments, and washes to treat burns, wounds, and infections, as well as ear drops (for ear infections).

This herb boasts a lovely blue flower and is often considered to be one of the most popular immune system boosting herbs. Both the antiviral and antibacterial properties of Echinacea have been shown in its ability to fight infections. In a meta-analysis of six trials that included nearly 2,500 individuals, for example, researchers showed that Echinacea reduced the risk of recurrent respiratory infections, especially in susceptible populations such as children, the elderly, and immune-compromised adults.

The delicate elderberry is a rich source of an antioxidant called quercetin, which has anti-inflammatory and antihistamine properties. According to the results of a 2017 study, for example, elderberry exhibited “prominent anti-inflammatory effects” in the laboratory. Elderberry has also been shown to fight flu symptoms.

This powerful antioxidant and a culinary king has antibiotic, antiviral, and antibacterial properties that are hard to beat. Countless studies have reported on the immune system benefits of garlic, including one from the University of Florida in which the authors noted that aged garlic extract reduced both the severity and number of cold and flu symptoms as well as the number of school or work days missed. These findings indicate that aged garlic extract “may enhance immune cell function and may be partly responsible for the reduced severity of colds and flu reported.”

Known for its pungent aroma and flavor, ginger is also a potent immune system supporter. It provides antihistamine, antibacterial, and antinausea properties that can help soothe the digestive tract and support the immune system. These and other health benefits of ginger are attributed to factors such as gingerols, paradols, shogaols, and sesquiterpenes, among others.

Enjoy several cups of green tea (Camellia sinensis) daily if you want to reap the immune-boosting benefits. The potent antioxidants in green tea, known as catechins, help destroy free radicals, support immune function, and prompt the liver to secrete an immune substance that assists in fighting infections. One of the catchins, EGCG, has been shown to increase the production of regulatory T cells, which in turn helps control the immune response.

A variety of medicinal mushrooms, including shiitake, reishi, and maitake, are known for their medicinal properties. A compound responsible for the immune-enhancing reactions from these and other mushrooms is glucan, a polysaccharide molecule. In a 2014 study, for example, researchers reported on the ability of maitake (Grifola frondosa) and shiitake (Lentinula edodes) extracts to stimulate the immune response. They found that a combination of the two medicinal mushrooms provided the strongest response, followed by maitake alone.

Oregano contains a rich supply of volatile oils that are known for their ability to support the immune system and a healthy environment in the intestinal tract. One reason for these healing properties is the presence of carvacrol and thymol, two compounds that have antibacterial and antifungal characteristics. According to Dr. Josh Axe, DNM, DC, CNS, carvacrol can reverse viral infections as well as inflammation, allergies, parasites, and tumors.

Andrea Donsky
Follow
Andrea Donsky, who holds a bachelor of commerce, is an international TV health expert, best selling author, and founder of NaturallySavvy.com—a recipient of Healthline’s Best Healthy Living Blogs for 2019. This article was originally published on NaturallySavvy.com
SHARE
Friends Read FreeCopyFacebookTweet
You May Also Like