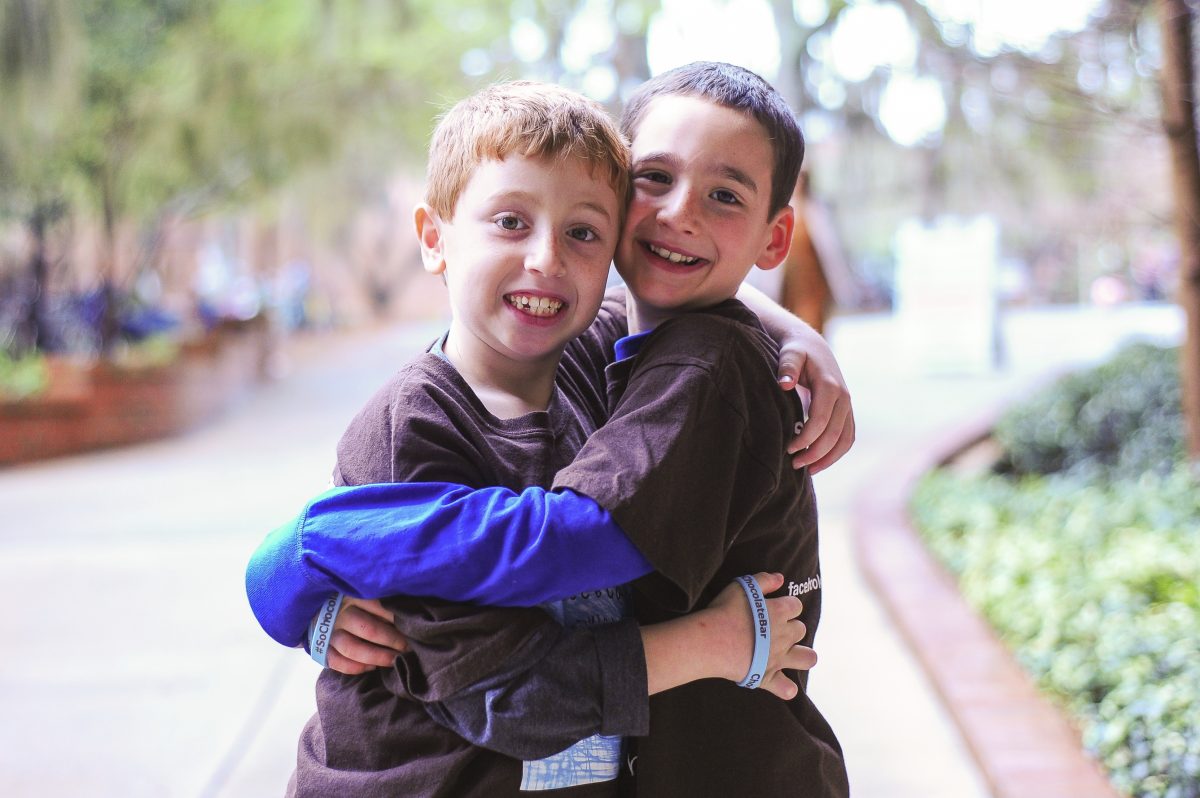 A few years ago, Dylan found out that Jonah had a rare liver condition called Glycogen Storage Disease (GSD), type 1b.

With GSD Type 1b, Jonah’s body can’t process sugars very well. If his blood sugar is not strictly regulated through frequent small meals, his life could be in danger. Since the disease is so rare, research is slim, and there is no cure.

Dylan remembers one day on the way home from school when his mom told him about Jonah’s disease.

At first, Dylan wanted to donate $100 from his bank account.

His mom, Debra Siegel, suggested putting together a bake sale or a lemonade stand instead. But Dylan decided to do something much bigger.

He wrote and illustrated a 16-page book called “Chocolate Bar.”

“He wrote it the next day and gave it to us and said, ‘Can you go make copies?’ and ‘We’re going to sell it,’ and ‘I want to make a million dollars.’ We thought that was kind of crazy, but now we’re almost there,” said Siegel.

The book has sold over 20,000 copies in 60 countries and all 50 states. The two boys’ families are also selling actual chocolate bars, donated by Whole Foods Market, as well as t-shirts and wristbands at ChocolateBarBook.com. They have made “well over” $900,000, according to Dylan’s father.

“Chocolate bar” is a phrase that means “awesome” to Dylan, and his book is about everything he thinks is “so chocolate bar,” like Disneyland and going to the beach.

He says helping his friends is “the biggest chocolate bar.”

Dr. David Weinstein, a professor and director of the GSD program at the University of Florida, is one of the few doctors who specialize in GSD. People come from around the world, including Jonah, to visit Weinstein’s lab, and he’s using the donated money from the book to fund studies to find a cure.

“He’s raised more money for this disease than all the medical foundations and all the grants combined. Ever,” Weinstein told ABC News.

GSD was almost always fatal until 1971, according to the University of Florida’s Glycogen Storage Disease Program website. At that time, it was discovered that uncooked cornstarch was digested slowly enough to be a good source of energy for those with the condition.

Some children, including Jonah, need to have a feeding tube installed to tolerate meals every one to three hours during the day and every three to four hours at night. Jonah often gets meals consisting of cornstarch mixed with chicken soup, to add more nutrition.

“It’s really hard when your child’s blood sugar drops, and you’re always afraid that he could have a seizure, go into a coma, and die if you don’t get to feed him on time,” said Lora Pournazarian, Jonah’s mother.

Jonah also can get seriously ill from simple colds or the flu, and has to get daily shots to boost his immunity.

“I hope this book accomplishes finding a cure for my disease and for lots of other diseases, so people with diseases can all be cured, and there’s no more disease,” said Jonah.

All the money donated at chocolatebarbook.com is given to the Jonah Pournazarian GSD 1B Fund at the University of Florida. After the fund reaches $1 million, they says they won’t stop there. They hope to eventually create a larger foundation, so they can help more people.

Dylan, Jonah, and their families are not only trying to help find a cure for GSD, they also hope to inspire other children to realize they have the power to change the world.

Sarah Le
reporter
Follow
Sarah Le is a reporter and editor for The Epoch Times in Southern California. She covers important general interest news events and topics in the state of California and the United States. She lives with her husband and two children in Los Angeles.
SHARE
Friends Read FreeCopyFacebookTweet
You May Also Like