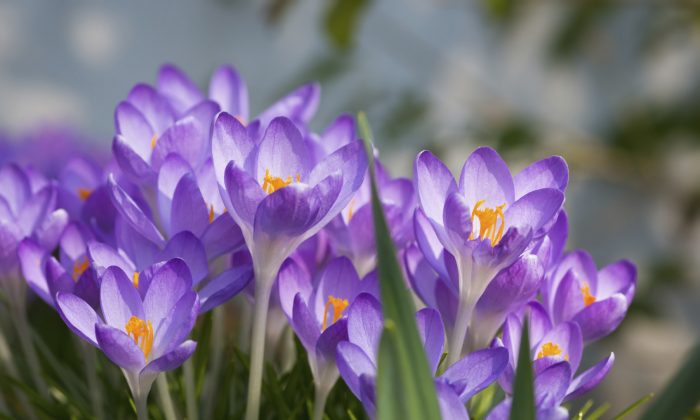 This exotic spice has been used to treat more than 90 illnesses over 4,000 years.  Here are just 8 healthy reasons to use more saffron.

When the Greek gods Zeus and Hera made love, the land burst open with blooming crocuses. Or so the legend goes.

While the crocus (Crocus sativus) is loved and appreciated as a colorful harbinger of spring, its mythic fame and power come from its vibrant saffron fronds or threads.

Avoid the powdered form of this spice. Instead, look for the actual threads or whole stigmas.

Prehistoric caves in Iraq are adorned with 50,000-year-old paintings made with saffron-based pigments.

Alexander the Great soaked in warm saffron baths to heal his battle wounds.  In 1374 this spice even ignited a 14-week “Saffron War” over a hijacked 800-pound shipment.

Documents going back to Hippocrates reveal the use of saffron as a treatment in more than 90 illnesses over 4,000 years. During the Black Death demand for medicinal saffron skyrocketed. This exotic spice has been used for coughs, colds, stomach ailments, insomnia, uterine bleeding, scarlet fever, heart trouble, and flatulence.

Is it all just myth?

No.  Modern research backs up the wisdom of the ancients.  Saffron has been shown to modulate at least 22 biological pathways.

Here are just a few of the proven curative benefits of saffron.

Saffron relieves many psychiatric conditions. Practitioners of Persian traditional medicine use it to treat depression. Studies validate the practice.

One six-week double-blind randomized trial compared saffron to the drug fluoxetine (Prozac).  Researchers randomly assigned 40 patients diagnosed with depression to receive either 30 mg per day of saffron or 20 mg of Prozac.  Results showed saffron was as effective as Prozac for mild to moderate depression.

In another double-blind study published in the journal Progress in Neuropsychopharmacology and Biological Psychiatry saffron was just as effective as Prozac in treating depression.  In this eight-week trial 40 patients randomly received 15 mg of saffron or 10 mg of Prozac twice a day. The treatments yielded similar results and both resulted in a 25% remission rate.

Saffron was also shown to be as effective as the depression drug imipramine (Trafanil) for mild to moderate depression with fewer side effects.

And a meta-analysis of five randomized trials found that saffron is effective in treating major depressive disorders compared to a placebo.

In ancient Egypt, Cleopatra used a quarter-cup of saffron in her warm baths before her encounters with men.  She was said to believe that the saffron would make lovemaking more pleasurable. She may have been right.

Studies show that saffron is effective in treating erectile dysfunction. In one study 20 patients with ED took a 200 mg capsule of saffron every morning.  After just 10 days, scores of rigidity and tumescence were significantly higher, and erections increased in frequency and duration.

In another study of 50 diabetic men, one group was treated with topical saffron and the other group with a topical placebo.  Results showed saffron gel significantly improved erectile dysfunction and the authors suggested that saffron be considered a treatment option for ED.

And saffron can relieve sexual dysfunction caused by Prozac. In a randomized, double-blind placebo-controlled study 36 men on Prozac received either 15 mg of saffron or a placebo twice a day. After four weeks the saffron group had significantly greater improvement in erectile dysfunction and intercourse satisfaction.  And 60 percent of the saffron group achieved normal erectile function scores.

Saffron improves sexual problems induced by Prozac in women too. In a randomized double-blind placebo-controlled study 38 women on Prozac complained of sexual dysfunction.  They were treated with either a placebo or 30 mg per day of saffron.  After four weeks the saffron group scored significantly higher in sexual functions including arousal, lubrication, and pain.

What Are Herbal Aphrodisiacs?

Saffron contains a carotenoid compound called crocetin.  In a study published in the journal Oncotarget, researchers found that crocetinic acid, a purified compound from crocetin, inhibited the growth of human pancreatic cancer cells grown either in a dish or as tumors under the skin of mice.

Crocetinic acid significantly reduced tumor growth by 75 percent compared to a control group of mice which saw a 250 percent increase in tumor growth. According to researchers, crocetinic acid was so effective because it targeted pancreatic cancer stem cells that usually resist conventional treatments like chemotherapy.

The authors noted that the dose of crocetinic acid needed to achieve their results was not at all toxic to normal human cells. They suggested that carotenoids are well tolerated at high doses and numerous studies have supported their use in cancer chemoprevention and chemotherapy.

The researchers conducted a randomized, double-blind, placebo-controlled study of people with early stage AMD.  One group in the study supplemented with 20 mg per day of saffron.  After just 90 days the researchers saw significant improvement in the saffron group.

Then the researchers tested a group of 29 patients aged 55 to 85 with early-stage AMD. The patients received 20 mg per day of saffron as a supplement for about 14 months.  The researchers observed improvements in their clinical measurements of the disease after saffron supplementation.

The researchers noted that saffron contains crocin and crocetin, two antioxidant derivatives of carotenoids. Crocin protects photoreceptors from light-induced death.  Crocetin increases the availability of oxygen to the cells.

Saffron is safe and effective in treating mild to moderate Alzheimer’s disease.  In a randomized placebo-controlled trial 46 patients with probable Alzheimer’s were given either a placebo or 15 mg of saffron twice per day.  After 16 weeks, the saffron group had significantly better cognitive function than the placebo group.

In fact, saffron is as effective as the Alzheimer drug donepezil (Aricept).  In a multicenter, randomized, double-blind controlled trial 54 AD patients received either 30 mg of saffron a day or 10 mg of Aricept. After 22 weeks the saffron group did just as well as the Aricept group with fewer side effects.

Patients received either 100 mg per day of saffron or a placebo. After three months, certain HSPs were significantly reduced by the saffron.

Saffron may even help you lose weight. In a French study researchers tested an extract of saffron in 60 mildly overweight women.  The women received either a placebo or 176.5 mg of the saffron extract twice a day.  Over an 8-week period caloric intake was left unrestricted.  At the end of the study the saffron group had a significantly greater body weight reduction than the placebo group.  Women taking the saffron also reduced their snacking and had a greater sense of satiety.

A double-blind and placebo-controlled trial found saffron relieves symptoms of premenstrual syndrome (PMS). Women with PMS received either a placebo or 30 mg per day of saffron for two months.  The authors concluded that saffron was effective for relieving PMS symptoms.

Use Saffron at Home

The cost is high because it takes about 15,000 crocus flowers to make just 3.5 ounces of dried saffron threads.  And the harvesting is painstaking.  It must be done entirely by hand during just one week a year.

Fortunately, saffron is powerful and you don’t need much. Just a pinch – about 20 threads – is all you need for most dishes.  In fact, if you use too much you may find the taste bitter.

Store your saffron threads in an airtight container away from sunlight. It should last for years.

Avoid the powdered form of this spice.  Instead, look for the actual threads or whole stigmas.  The powders are often diluted with poor quality or less-expensive spices like turmeric.

Steep the threads in hot water or broth for 5 to 20 minutes.  This releases the saffron’s essence and aroma. But the threads will continue to release color and flavor for 24 hours. After soaking you can add them to your recipe.

Add saffron to risotto or other rice dishes.  It also goes well in seafood dishes like bouillabaisse or paella.  Or use it in beef stews or tomato sauces.

Store your saffron threads in an airtight container away from sunlight.  It should last for years.