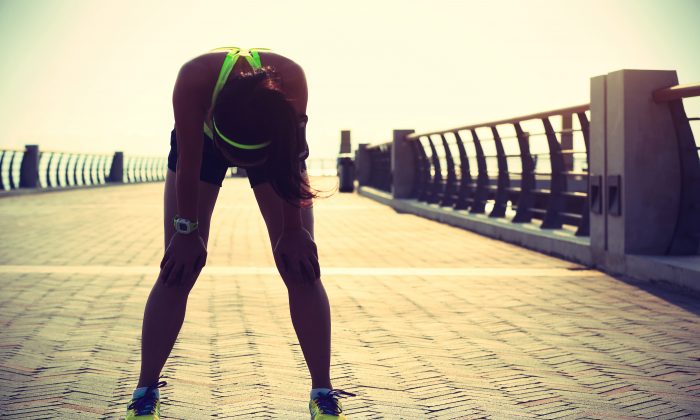 The 1980s really were the good old days when it comes to eating, exercise, and weight loss. Why? The authors of a new study suggest it’s more difficult for today’s adults to maintain the same weight as their counterparts two to three decades ago, even when the amount of food and exercise are equal.

In other words, a 30-something today who eats 2,000 calories per day and exercises two hours per week is likely to be about 10 percent heavier than a 30-something living in the 1980s who followed the same lifestyle habits. How can that be?

This is definitely not great news for people today, especially those who are struggling to maintain a healthy weight.

It was a surprise to the team at York University in Toronto, who set out to identify whether the relationship between obesity and the number of calories consumed, amount of physical exercise, and intake of macronutrients (protein, fat, carbohydrates) has changed over time. To accomplish this goal, they evaluated the dietary data of 36,400 Americans between 1971 and 2008 and the exercise data of 14,419 individuals between 1988 and 2006.

What they discovered is that when all three factors were equal, an individual in 2006 would have a body mass index about 2.3 points greater (or about 10 percent higher) than a person in 1988. This is definitely not great news for people today, especially those who are struggling to maintain a healthy weight.

According to one of the study’s authors, Jennifer Kuk, associate professor at York University’s School of Kinesiology and Health Science, their findings suggest that “if you are 40 years old now, you’d have to eat even less and exercise more than if you were a 40-year-old in 1971 to prevent gaining weight.”

However, food and exercise are not the only players in this scene. She went on to say that “it also indicates there may be other specific changes contributing to the rise in obesity beyond just diet and exercise.”

The question is, what are the other changes that are contributing to this increase in obesity? Kuk and her colleagues did not come to any conclusions in this study, but they did name some possible candidates.

Pesticides and some of the chemicals in food and food packaging, plastics (such as BPA and phthalates), health and beauty products, furniture, and other everyday products may contribute to weight gain. This is mainly associated with their ability to disrupt hormone function and balance.

The population of microorganisms in the body, called the microbiome, may not be what it used to be in the 1980s. Since it’s known that certain bacteria living in the gut have an impact on weight gain and obesity, a shift in that bacterial population could be a contributing factor.

Kuk and her colleagues suggested that two eating habits could be behind the altered gut environment. One is eating more meat today than two to three decades ago—and most animal products harbor antibiotics, steroids, and hormones. Another is using artificial sweeteners, which some researchers claim can make you fat.

Yet a third reason is the love affair with consuming refined, processed foods, which have been shown to have a detrimental impact on beneficial bacteria in the gut.

A 2011 report from the Center of Disease Control and Prevention’s National Center for Health Statistics stated that the rate of antidepressant use in the United States increased nearly 400 percent since 1988. It pointed out that about 11 percent of Americans aged 12 or older take these medications, including individuals who have not consulted a mental health professional within the past year.

One of the most commonly prescribed antidepressants, Prozac, hit the market in 1988. Weight gain is one side effect of this drug, as with many other antidepressants (like Celexa, Lexapro, Paxil, and Zoloft). Experts report that up to 25 percent of people who take antidepressants can expect to pack on an extra 10 pounds or more.

The relationship between stress and obesity has been the topic of numerous research studies, and what we’ve learned is this: When we are stressed, the body’s level of serotonin (a “feel good” hormone) drops, which can increase our cravings for carbohydrates (like cookies, chocolate, chips, ice cream … you get the picture).

Another hormone, cortisol, is affected by stress, except this one can be overproduced when stress is chronic. Chronically high cortisol levels are associated with an accumulation of belly fat, which in turn releases more cortisol, setting off a vicious cycle. Chronic stress also triggers nerve cells to release neuropeptide Y, which can promote gaining additional body fat.

Have stress levels increased over the past 30 years? Experts generally believe they have. For example, Carnegie Mellon University researchers evaluated data gathered from three surveys conducted in 1983, 2006, and 2009 involving more than 6,000 individuals and their level of stress. Overall, the results showed a 10 to 30 percent increase in stress across all demographic categories (gender, age, income, education, ethnicity, employment) over the 26-year period.

Lack of sufficient sleep and obesity make an unhealthy combination, which researchers have documented repeatedly. In a study of nearly 14,000 adults, investigators from the Centers for Disease Control and Prevention found that adults who slept for six or fewer hours per night were more likely to be obese and carry excessive belly fat than those who slept seven to nine hours per night.

One factor affecting sleep that has changed over the past three decades is our exposure to light at night; specifically, our obsession with taking our tablets, laptops, cell phones, and iPads to bed with us. Exposure to light from electronic devices (especially close up) has been shown to be detrimental to our health, including sleep quality. These electronic devices emit light in a blue-and-white range, which can suppress the normal nighttime release of the hormone melatonin, thus delaying sleep.

Our exposure to electromagnetic fields (EMFs) has increased significantly over the past few decades, primarily because the number of devices with which we intimately interact has grown and now includes cellphones, cell towers, Wi-Fi, wireless laptops, routers, and other electronic devices. But how can EMFs contribute to obesity?

Andrew Goldworthy, lecturer (emeritus) at Imperial College London, explained that EMFs can stimulate glandular activity, especially those of the endocrine system, which are involved with metabolism. He has stated that “it may be responsible, at least in part, for the current outbreak of obesity and the many other illnesses that stem from it.”

One example of the impact of EMFs on weight can be seen in a study from 2012, in which the authors found that people who lived within 100 meters of a cellphone base station had a significant reduction in the release of certain hormones, with the greatest loss in the production of thyroid hormones. This can result in hypothyroidism, which is characterized by weight gain and fatigue.

The reasons why some people are overweight or obese are complex and likely highly individual. Some of those reasons seem to involve factors that have changed over the past few decades, which suggests we have more reason than ever to look beyond caloric intake and exercise to explain why we are fatter than we were 30 years ago.

Deborah Mitchell is a freelance health writer who has authored, co-authored, and written more than 50 books and thousands of articles on a wide range of topics (visit DeborahMitchellBooks.com). Andrea Donsky is an author, registered holistic nutritionist, editor-in-chief of NaturallySavvy.com, and co-founder of The Healthy Shopper Inc. This article was originally published on NaturallySavvy.com