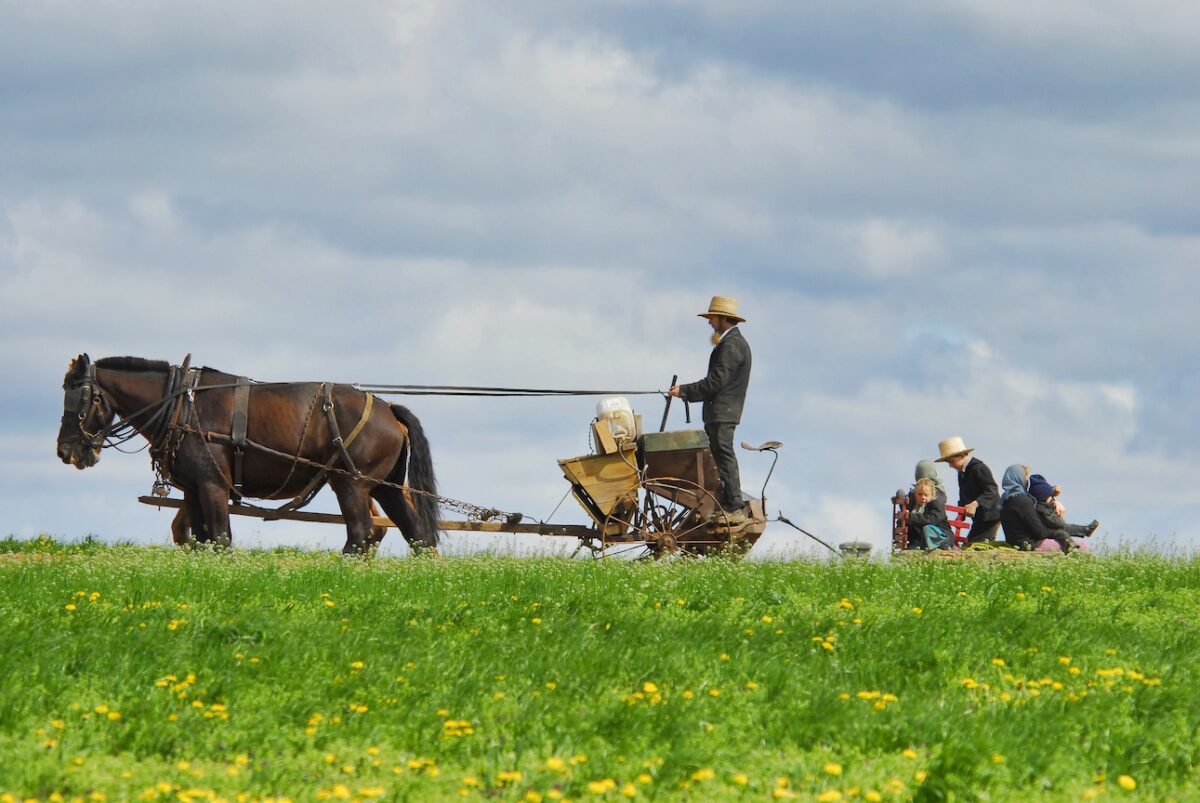 Amish communities are marked by a quality of life most people can only dream of, and it has nothing to do with money, material goods, or professional success. (Greg Kelton/Shutterstock)
Traditional Wisdom

6 Things I’ve Learned From the Amish

My first novel about the Amish was published in 2010. Since then, I’ve published 28 additional books about the Plain people. I’ve also visited communities in Indiana, Ohio, Pennsylvania, Oklahoma, Colorado, and Wisconsin.

I began my own journey with minimalism two years ago when I took a Joshua Becker course. I’ve noticed many similarities between the Amish and those of us among the “Englisch” who are seeking to live a more intentional life.

In case you aren’t familiar with the Amish, they are a group of people whose roots stretch back to the Anabaptists. They’re known for living simply, dressing plainly, and farming in an old-fashioned way.

In general, Amish don’t have electricity in their homes, they don’t own cars or go to college, and they have large families. However, any similarity to the Puritans of 17th-century America ends there.

The Amish are lifelong learners who regularly use computers at their local libraries. Many communities embrace solar power for their businesses, and they don’t mind hiring a driver in order to visit neighboring towns.

So, what can we learn about the Amish that can help our quest to embrace minimalism?

Here are six things I’ve learned about living intentionally from the Amish:

I’ve spoken with many Amish families about this, and they don’t want an endless march of tech toys in their home. They believe that having a phone, computer, or television in their home will distract from their family time.

I’m not ready to leave my phone in the mailbox so it doesn’t interrupt dinner, but I am more intentional about turning off the ringer and notifications—especially during meals and family time. I have chosen not to have a television in every room in my house. I use my desktop computer for work, and when the workday is over I turn it off.

Hoping we will have more time to spend with our children or significant other isn’t good enough. We have to make the decision to put them first and take steps that reflect their importance in our lives.

2. Choose to stay home over going to yet another social event. The Amish have a very tightly knit social community. Their get-togethers are large—weddings regularly include more than 500 guests, and everyone is involved in the local school.

However, they generally don’t go out at night—they’re home with their family, doing schoolwork, playing games, and taking care of evening farm chores. They choose to embrace a slowed down version of life.

At first, I felt a bit anti-social saying “no” to coffee dates, weeknight concert tickets, and committee positions. But once I allowed myself to spend the majority of my evenings at home, I quickly understood the benefits.

I’m less exhausted. My family’s stress level is down. Home has become a refuge again, a place to gather, recharge, and prepare for the next day.

3. Simplify celebrations. The Amish love to party, but their celebrations look a bit different from ours. The entire extended family often shows up. Gifts tend to be homemade or utilitarian. Because they don’t often eat out, a trip to the local ice cream shop with the whole family is a big deal. They love playing games together, whether it’s board games, baseball, or volleyball.

The emphasis is more on being together and less on wrapped presents—in fact, they don’t wrap presents at all. Even wedding gifts are displayed on a long table, unwrapped.

When I was a single mom, it was difficult for me to find extra money for gifts. It was a big deal when I’d saved enough to buy my son a new Lego set. Now that my children and my husband’s children are adults and our income has stabilized, we understand that they don’t need “things” from us. In most cases, they don’t even want things.

But they love being celebrated—we go out for a special dinner, watch a movie together, or play a game of cards. The celebration is just as special without renting a bouncy house (which would be strange for 30-year-olds) or buying expensive gifts.

4. Avoid debt. It’s very rare that you will find an Amish person who is in debt. Occasionally, they will take out a loan for their home, but more often, they simply live with their parents until they have enough saved up to purchase their own piece of property.

That home will often be small, which means they will add on to it as they have children. The property may also be less acreage than they want, so they’ll watch for an adjacent neighbor looking to sell a few acres.

I, on the other hand, have always anticipated what I might need and overbought. Big things or small, I always bought more than what I needed. Looking for a house? Buy a big one just in case. Who knows? I might have five children. (I was only able to have one.)

If I could go back and speak to myself, if I could follow the Amish example, I would be content with what I need now and let tomorrow take care of itself.

5. Be satisfied with less. When I first visited the Amish, I had a difficult time understanding that they truly were happy with less. One of the first farms we toured in Indiana was a very pretty, 98-acre place. After visiting with the owner (a friendly, personable old guy wearing suspenders and sporting a long beard), we learned that he had been offered $6 million for his farm. Someone wanted to build a golf course there. He turned them down. That literally blew my mind.

After all, this family was making less than $20,000 a year. Surely, they could use that money! The person who took us to the farm explained it this way. “What would he do with $6 million that he isn’t doing now? He’s content with his life, and his children are independent adults who are content with their lives.”

I could think of a lot of things to do with $6 million, but over the years, as my own life has settled into a less stressful rhythm, I’ve come to understand that money isn’t always the answer.

Would I be more happy with $6 million? Probably not (though I might be tempted to give it a try if someone offered it to me). I do understand that more money doesn’t fix every problem, that the job that pays more may not be the best fit for me, and that owning a bigger house or newer car isn’t going to make me happier.

6. Put first things first. The Amish don’t live an untroubled life in an idyllic setting with perfect people. When we look at their lives though the one thing that stands out the most—more than the horse and buggy, large families, and lack of technology—is that they seem to have found a way to put first things first.

Family, neighbors, friends, faith—these are the things that are the pivot points of their lives. They are not interested in a newer car, the latest phone, or another promotion.

I’ve spent countless hours with the Amish while writing many books about them, and it’s helped me to understand what the pivot points in my life should be.

So I try to do that every day. If my adult son calls, I put aside what I’m working on and talk with him. If my mom stops by for an unannounced visit, I give her my time. I try to intentionally live in a way that puts first things first.

So What’s the Point?

If you have an Amish community around you, I strongly suggest you visit. Although you might not want to trade in your car for a buggy, you’ll no doubt take away at least one thing that you can incorporate into your life.

If you don’t have any Plain folks around, pay attention to some of the other families in your neighborhood, school, or church. Who isn’t stressed? Who doesn’t have a look of perpetual frenzy on their face? Maybe start a conversation with them. It could be that something they are doing will translate well in your life and your pursuit of intentional living.

Vannetta Chapman is the USA Today and Publishers Weekly bestselling author of 39 novels, many of them about the Amish. You can find out more about her books on her website. You can also follow her on Twitter.