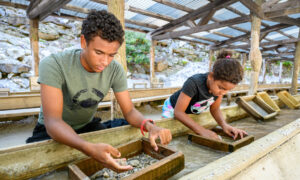 If you’ve never been to Norway (and even if you have), then you’re in for a treat. This five-minute video adventure into the heart and out to the coastlines of Norway is mesmerizing, beautiful, and will make you want to scream out: “Pack your bags, honey. We’re going to Norway.”

The time-lapse video, appropriately titled ‘NORWAY,’ was stitched together by Norwegian Morten Rustad from tens of thousands of images as part of his five-month, 10,000-mile journey across the Scandinavian nation. It showcases Norway’s varied and gorgeous landscape that includes fjords, mountains, islands, waterfalls, and valleys.

“The aim of this 5 minute short film is to show the variety of Norway, everything from the deep fjords in the Southwest, to the moon landscape in the North, the Aurora Borealis (Nothern Lights) and the settlements and cities around the country, both in summer and winter,” Rustad said.

It’s not just Norway’s natural beauty that is on display. Also included in the video are time-lapses of its colorful seaside buildings, snow-covered farms, and unique architecture.

Here are some noteworthy landscapes and locations in the video that we could pinpoint:

– At 0:06 is the 4,700-ft tall mountain Innerdalstårnet, nicknamed ‘The Matterhorn of Norway.’ Like the Matterhorn, which is one of the tallest peaks in the Alps, it is shaped like a pyramid.

– At 0:35 is the Nærøyfjord, which is a UNESCO World Heritage Site and served as inspiration for the fictional country of Arendelle in the Disney film Frozen.

– At 0:57, you’ll see the 800-foot-tall Seven Sisters Waterfall at Geirangerfjorden.

– At 1:02, you’ll see the view from atop Preikestolen, one of the most popular tourist attractions in all of Norway. It’s a steep cliff that rises almost 2,000 feet high above a fjord called Lysefjorden.

– At 1:28 is a panorama of the city of Risør in the south of Norway. Risør is famous for its annual wooden boat festival.

– At 1:40 is the sea port town of Ålesund, a popular tourist attraction.

– 1:52 is the Nidaros Cathedral in Trondheim. It was traditionally where the King of Norway was consecrated.

– The structure at 1:58 is the Holmenkollen Ski Jump in the capital of Oslo.

– At 2:04, you’ll see the Fredvang Bridges, which are a pair of cantilever bridges that connect the island of Flakstadøya with the fishing village of Fredvang in northwest Norway.

– The island at 2:15 is called Værøy, where you’ll find the abandoned village of Mostad, where residents used to fish and catch puffins for a living.

– At 2:42, you’ll find the Kannesteinen Rock, which was shaped by thousands of years of waves into its current mushroom-like shape.

– 2:48 is the Waterfall at Turtagrø in Jotunheimen.

– At 3:05, you’ll see the sunset from the famous globe monument at North Cape in Northern Norway. North Cape is situated less than a mile from the northernmost point in Europe.

– The zig-zag mountain road at 4:14 is called the Trollstigen, which has a steep 10% incline and 11 hairpin turns.

NORWAY’s soundtrack is created by the Norwegian musician Jogeir Daae Maeland and is called ‘Frozen Moments.” You can buy it on iTunes here.

To read more about the making of the film, visit rustadmedia.com.