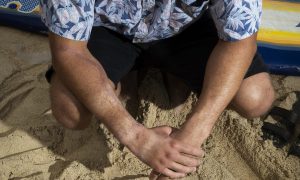 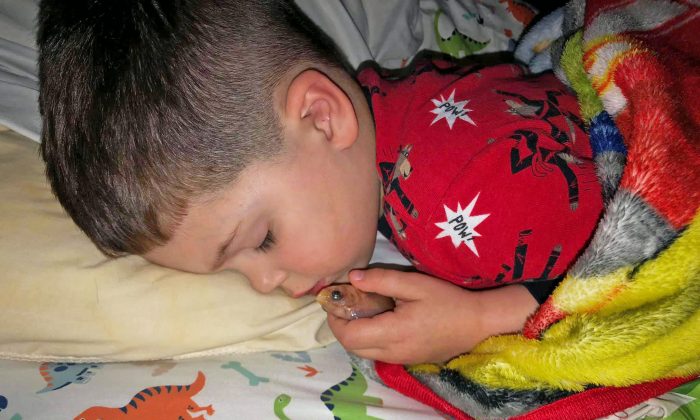 Everett Hamlin, 4, gives his pet fish Nemo a bedtime hug without realizing he would kill it on Feb. 24, 2019. (Tori Hamlin/Facebook)
US News

A little man in Georgia is devastated after discovering that he accidentally killed his pet fish after taking the fish to bed for a hug.

Everett Hamlin, 4, woke not long after falling asleep on Feb. 24 to the questioning of his shocked mother, Tori, who was asking why he was clutching his fish Nemo in bed.

Tori then proceeded to explain to her son, who had yet to realize Nemo was already dead, how removing the fish from the tank for a bedtime hug would actually kill it.

Everett was devastated to discover that Nemo had passed away because he could not live out of water.

“Everett has had this fish almost his whole life,” Tori said in a Facebook post dated Feb. 24. “Now he’s upset because he killed it and said he just wanted to pet it. Lord help me.”

Tori and her husband, Corey, had just read Everett a bedtime story and put him to bed before watching a little television when they heard a sound from his bedroom.

“[I] look in his room and see his little chair up to his dresser and the lid off his fish tank on the ground and the light in the water and, I’m like, Corey the lid is off his tank and I can’t find the fish (Everett is asleep at this point),” Tori said. “Corey walks in there and this is what we find.”

Everett only intended to pat Nemo, which made his mother feel sorry for him.

“I was shocked at first but then, when he said he just wanted to pet it, I was thinking, ‘Oh my god, that’s so sad,'” Tori told The Daily Mail. “He had no understanding of what he was doing. Honestly, I’m surprised he caught it, he’s got some good skills there.”

This little guy accidentally killed his pet goldfish after taking it out of the tank so he could give it a cuddle 😢 https://t.co/KdAyqLEdPS

The next day, Everett had finished grieving the loss of his friend Nemo.

“I explained it to him again,” Tori said, “and he said, ‘That’s alright. We’ll have to get another fish and I won’t touch it. I’m only allowed to touch fish when I go fishing.'”

— Not Rates da Goldfish hiding behind a Rock (@RatesDaGoldfish) March 8, 2019

Tori said she was pleased with Everett’s ability to learn from his mistakes.

“Not every kid listens to their parent and learns from that,” she said. “Sometimes they have to make mistakes to learn from them. It’s part of parenting and growing up.”

Goldfish are supposed to live as long, if not longer, than cats and dogs, but most don’t live to see their 5th birthday because it’s so socially acceptable to abuse them

If you don’t think an animal deserves proper care because they’re “just” a fish, hamster, etc, DON’T GET ONE

Tori shared the story online where it went viral and attracted more than 65,000 comments, likes and shares. The family was flooded with offers to buy Everett a new pet fish.

However, Tori and Corey have instead decided to give their son a gift card so he can  choose a new fish at the pet store.

“I’ve had people from all over the place getting in touch asking if they could buy him a new fish. I don’t want to take other people’s money. That was not the point in the story,” Tori said. “We told him we would get him a new tank and some more fish for his birthday, so we’re hoping to do that in the next few days.”