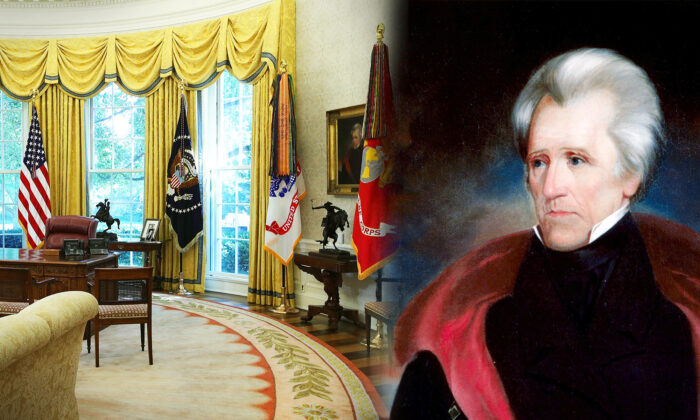 Soon after his inauguration, newly elected President Trump made some notable redecorating decisions in the Oval Office. The red drapes of the previous administration went down; up went brilliant gold drapes; military, American, and Presidential flags were arranged in a half-circle behind the Resolute desk—and a painted portrait of the seventh President of the United States, Andrew Jackson, was hung prominently to one side.

As for the portrait of Jackson, it seems that President Trump holds a special place in his heart for the Democrat who served in office from 1829 to 1837. Pundits have often described Trump as “Jacksonian,” while Trump once called Jackson “an amazing figure in American history—very unique so many ways,” per The Hill.

But what is it about Jackson that Trump finds so “unique” and “amazing” exactly?

Here are four things worth knowing about Jackson that might shed some light on Trump’s fascination with the man:

A dignified senator and war hero from Tennessee, who was not part of the elite establishment, Andrew Jackson was swept into office in 1828. Americans were sick of privately owned banks manipulating the economy for their own gain at the expense of the people—a situation that sounds eerily familiar today. Trump rode his own populist victory in opposition to an establishment, many whom had spend decades in positions of power.

And like the pundits who snickered during Trump’s run for office, the elite establishment of Jackson’s day underestimated his chances during his campaign. Jackson’s victory came as a shock to them, as Trump’s did in 2016.

“It was during the revolution that Jackson first confronted and defied an arrogant elite,” Trump said during a speech at Jackson’s estate, The Hermitage, in Nashville, Tennessee, as per The Hill. “Does that sound familiar?”

He added, “From that day on Andrew Jackson rejected authority that looked down on the common people.”

During Jackson’s first term, he fired 2,000 of the 11,000 allegedly compromised government employees serving under him—his own version of the phrase Trump would later coin, “drain the swamp.”

Meanwhile in 2017, the staff turnover in the Trump administration’s first year (where employees either quit or were fired) was higher than the last five presidents, three times greater than former President Obama’s, and twice that of President Reagan’s, according to Brookings Institute. Trump purged the top echelon of the FBI.

3. Jackson was a war hero

Andrew Jackson was a military general and the hero of the final battle of 1812. During the bloody Battle of New Orleans on Jan. 8, 1815, he was made famous for halting the British intrusion into the American frontier, effectively wiping out the Brits with almost no American casualties.

Trump is obviously no war hero, though his respect for the military started at a young age. He attended the New York Military Academy, where he learned a lot about “channeling [his] aggression into achievement,” as he explained in “The Art of the Deal.”

Today, President Trump is an ardent supporter of the U.S. military and military veterans. He’s taken decisive action to fund and rebuild the military that had been gutted by the previous administration.

“You’re a den of vipers! I intend to rout you out, and by eternal God, I will rout you out!” Jackson once famously declared to the banking establishment.

Jackson is famously known for vetoing Congress’s bill that would have renewed the bank’s charter in 1832. Some consider his Veto Message to be one of American’s great documents, spelling out clearly the government’s responsibility to its citizens, rich and poor. An excerpt reads:

“It is not our own citizens only who are to receive the bounty of our Government. More than eight millions of the stock of this bank are held by foreigners … Is there no danger to our liberty and independence in a bank that in its nature has so little to bind it to our country? … Controlling our currency, receiving our public moneys, and holding thousands of our citizens in dependence, it would be more formidable and dangerous than the naval and military power of the enemy.”

Nearing the end of Jackson’s life, when asked what his most important accomplishment had been, he answered, “I killed the bank.”

Today, while President Trump hasn’t quite laid into the Federal Reserve (today’s version of the central bank) to the same extent that Jackson did, he often rails against the Fed via his now-famous tweets. Trump blames them for preventing the economy from taking off like a “rocket ship,” as he puts it.

The Federal Reserve should get our interest rates down to ZERO, or less, and we should then start to refinance our debt. INTEREST COST COULD BE BROUGHT WAY DOWN, while at the same time substantially lengthening the term. We have the great currency, power, and balance sheet…..

….The USA should always be paying the the lowest rate. No Inflation! It is only the naïveté of Jay Powell and the Federal Reserve that doesn’t allow us to do what other countries are already doing. A once in a lifetime opportunity that we are missing because of “Boneheads.”