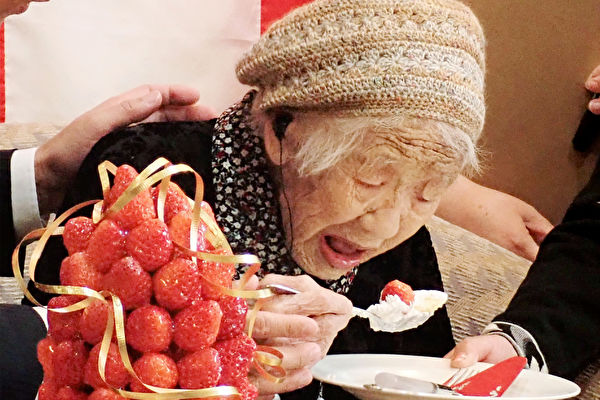 Japanese supercentenarian Kane Tanaka passed away at the age of 119. The picture shows Tanaka celebrating her official certification as the “World's Longest Living Person” by Guinness World Records on March 9, 2019 in Fukuoka Prefecture. (JIJI PRESS/AFP via Getty Images)
Better Living

119-Year-Old Loved Sugary Drinks—What Was the Secret to Her Longevity?

Kane Tanaka was the world’s longest living person, as verified by Guinness World Records. The Japanese woman sadly passed away just recently on April 19, 2022, at the age of 119. Contrary to common health beliefs, this supercentenarian never abstained from any food, as she enjoyed drinking canned coffee and carbonated drinks every day. Doctors say they believe that three major factors contributed to her unusual longevity.

The Life of Kane Tanaka

Kane Tanaka was born on January 2, 1903 (i.e. the 36th year of the Meiji era). She celebrated her 119th birthday on January 2, this year. She had lived through five Japanese eras, from the Meiji to the Reiwa era, under five generations of emperors.

Tanaka believed that her three secrets to longevity were curiosity, hard work, and her passion for Othello. Whilst living in a seniors’ home in Fukuoka City, Japan, she played Othello with her fellow residents almost every day. Since she detested losing, she would keep on playing until she won. She interacted with the staff at the nursing home on a daily basis. She also drew, practiced calligraphy, and kept up with mathematics every week.

In terms of diet, she did not avoid any particular food. In addition to her three daily meals, she would also drink canned coffee and carbonated beverages every day, with a side of chocolates, which she loved.

Tanaka once set a goal to “live a healthy life to the age of 120.” Although she was several months away from achieving it, her energetic appearance throughout her lifetime still raised a question for us: How could she live such a long and healthy life while consuming unhealthy high-sugar drinks?

Dr. Lobsang, a well-known body-mind-spirit preventive medicine expert and director of Lobsang Preventive Medicine Group, pointed out that when people get older, they usually have fewer and fewer friends. As a result, they are often by themselves and feel lonely, which would lead to a higher mortality rate.

After 75 years of research, Harvard University has discovered that the most important factor to a long and healthy life is socialization. The study, which started in 1938, tracked a total of 724 adults. Each year, the research team would ask the research subjects about their work, life, and health.

The results of the study show that people who maintain more contact with their family, friends, and community are happier and healthier in general; and socially active people also live longer.

On the contrary, loneliness is harmful to physical and mental health.

The people who felt lonely would see health decline in middle age, earlier than usual. Their cognitive functions would also deteriorate earlier, making an early death more likely. According to Dr. Lobsang, Tanaka’s love for Othello, and her curiosity, positively contributed to her social interactions.

After retirement, many people have less interaction with others, and can be without any goals; their mortality rate also becomes higher. According to Dr. Lobsang, a study conducted in Germany discovered that if people are willing to return to society after retirement, such as teaching in schools, volunteering, and taking care of others, they can reduce their mortality rate by 40 to 50 percent.

There is such an example of exactly this in Japan. In 2019, 90-year-old Yoshimitsu Yabuta was hired by McDonald’s, thus becoming the oldest McDonald’s employee in Japan. He works the night shift four days a week, five hours a day, cleaning the dining area seats, preparing ingredients, and performing other tasks. Similar to Tanaka, Yoshimitsu Yabuta also eats foods considered unhealthy, such as McDonald’s fries and beverages. However, this type of diet and his aging body have not prevented him from working. His store manager praises him for keeping the store clean. In addition, Yoshimitsu Yabuta believes that his interactions with his colleagues are important to him. So even if he sometimes has different opinions from his younger colleagues, he tries to understand them.

2. Kind-Heartedness and Tolerance Over Anger

From her photos and videos, we can see that Tanaka always appeared peaceful and calm.

Dr. Lobsang pointed out that when it comes to health and longevity, people often pay attention to what they eat and drink and which exercises to do. However, according to him, “the real secret is to have a generous heart.”

Many well-respected Buddhist monks in Tibet and India live to be 80 or 90 years old, or even over 100 years old, because they have a high degree of calmness.

Many cancer patients, such as those with lung cancer or breast cancer, were on a healthy diet, without smoking or drinking, and doing regular exercises. However, they still developed cancer. Dr. Lobsang said that he had met with many of these patients in his clinic and realized that it was all the psychological factors, such as resentment and hatred towards others, that had made them ill.

“Resentment is associated with lung cancer and breast cancer,” he said, adding that the accumulation of such negative emotions would weaken and disrupt people’s immune system functions, which is very detrimental to health.

He stressed the importance of not getting angry, because anger would generate resentment and also lead to sadness and depression. Some people would also get angry with themselves, which is even more damaging to their health.

It is not easy to “not become angry,” and it requires frequent practice to achieve peace of mind.

3. Cultivation of a Sense of Happiness and Altruism

Dr. Zhang Shiheng, director of the Qi Lin Clinic, pointed out that on the topic of health and longevity, most people would rather focus on cardiovascular diseases, osteoporosis, sarcopenia, blood pressure and blood sugar, but they often neglect the brain.

“Brain health has a lot to do with happiness,” he stressed, as happiness affects brain health, which in turn affects physical functions and longevity.

Todd Kashdan, an American psychologist and professor of psychology and director of the Well-Being Laboratory at George Mason University, suggests six “ingredients” to give to the brain to cultivate a sense of well-being: living in the present, being curious, doing what you like, being considerate of others, cultivating relationships, and taking good care of yourself to keep physically fit.

Tanaka always did the things that she liked, stayed curious, and maintained a learning mindset, which is also a sign of living in the present.

Dr. Zhang said that people’s curiosity is at its peak when they are infants, but when they start going to school and entering society, they then will have to follow school rules and company regulations, which can suppress their curiosity. He advised people to free their curiosity and learn more about new things after they retire.

“I have a patient who had never touched a violin before, and he started learning violin in his 70s,” Dr. Zhang said, adding that this patient is also very talkative. “I think it must have something to do with his curiosity and exposure to these difficult tasks.” Moreover, learning something difficult can keep the brain active and reduce the apoptosis of brain cells.

Dr. Zhang also said that being considerate of others, helping others, and acting altruistically are more rewarding psychologically than being helped by others.

Dr. Lobsang concurred with him, “I always say that altruism, happiness, and health equal to one another.” Altruism leads to happiness, which in turn leads to health.

Happiness is also related to brain capacity. A study found that patients with depression have a higher rate of developing Alzheimer’s disease, Parkinson’s disease and/or brain atrophy than the general population.

Dr. Zhang pointed out that although Tanaka loved soft drinks, she also did many things related to improving brain health, which could compensate for this dietary problem.

Of course, a healthy diet is still very important. For example, the MIND (Mediterranean-DASH Intervention for Neurodegenerative Delay) diet can delay brain aging and reduce the risk of developing dementia. Dr. Zhang said jokingly that if Tanaka had come to his clinic when she was alive, he would have recommended this type of diet to her.