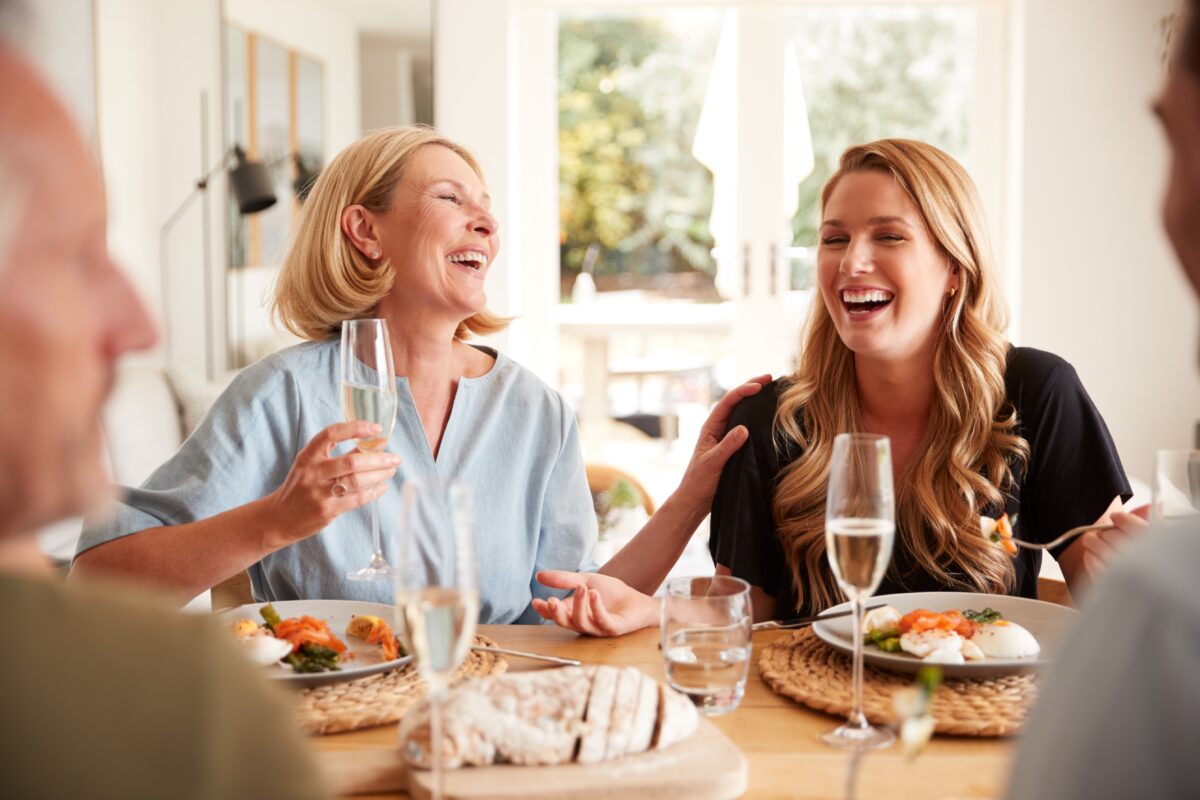 Normally your parents won't tell you if they have trouble in their retirement plan. Talk with them and find the solution together is a smart choice for your parents and you. (Monkey Business Images/Shutterstock)
Fixed Income

While they do get Social Security and a small pension, money is tight for them. It’s not uncommon for them to embarrassingly ask for a couple of bucks for groceries from me and my siblings. While we never hesitate, it hasn’t been easy.

My brother gets annoyed because he feels that our parents were irresponsible, while my sister is a little more empathetic and has hired our mom part-time for household chores—oddly enough this has brought them closer. And, for me, it’s been a rude awakening that I also am not prepared for retirement.

The whole situation is something that we never anticipated. While we’re still learning, and things seem to be getting better, I wouldn’t want anyone else to go through this. As such, that’s why I decided to present you with a few options in helping your parents retire.

1. Your Parents Will Retire Broke

Don’t take this personally. But, there’s a very good probability that your parents will retire broke.

According to a GOBankingRates survey, a whopping 64 percent of Americans are expected to retire with less than $10,000 in their retirement savings accounts. More troubling is that 45 percent admitted that they had no money saved for retirement.

As if that weren’t concerning enough, data from Northwestern Mutual’s 2019 Planning & Progress Study shows that 56 percent of American adults aren’t aware of how much money they’ll need to retire. Without determining this, that makes it almost impossible to effectively save in order to create and meet retirement goals.

And, even if your parents have been saving, they probably aren’t setting aside enough. Experts recommend that when it comes to retirement savings, you should earmark 10 to 20 percent of your salary—15 percent is often the magic number though. Unfortunately, Bankrate found that only 16 percent of Americans are setting aside 15 percent or more of their salary towards retirement. For a majority of people, they’re saving less than 10 percent of their income.

The short of this? You’re probably going to have to assist your parents by helping them develop a retirement plan or financially after they retire.

2. Social Security and Pensions Are Dwindling

But, wait a minute? Don’t your parents have Social Security and a pension plan coming their way? Well, since nine in 10 retirees rely on Social Security as a source of income in retirement, you can’t blame them. Furthermore, via the Employee Benefit Research Institute, “68 percent of retirees (and 48 percent of workers) feel confident that Social Security will continue to provide benefits of equal value to those received today.”

Why’s this a problem? Because there is a possibility that Social Security trust funds will run out about 2035. But, let’s say that this problem does get addressed. On average, they receive $1,538.14 per month for Social Security in 2022. That’s probably not enough for them to leave off of.

What about their pensions? Well, they’re becoming extinct. From 1986 to 2016 the number of pension plans offering defined benefits plummeted by about 73 percent. And, to be perfectly blunt, there’s a $4.6 trillion U.S. public pension mess.

Have your parents have been banking on either Social Security or a pension? If so, you might have to be the bearer of bad news and let them know that these retirement plans may no longer be available for them. As such, they may need to consider other options such as defined contribution plans like a 401(k) or 403(b) plan, IRAs, Solo 401(k) plan, guaranteed income annuities (GIAs), or profit-sharing.

3. They Probably Don’t Have a Financial Advisor

What’s holding people back? There a variety of reasons. But, mainly it’s because there’s a misconception that financial advisors are too pricey or will influence key financial decisions.

Growing up, you probably viewed your parents as invincible, super-powered human beings. Even if they are incredible people, aging will eventually catch-up to them. And, when it does, they’re going to need some sort of assistance—usually in the form of long-term care.

Obviously, this is can be a challenge for you emotionally. No one wants to see their parents struggle physically or mentally. But, 52 percent of those turning age 65 will require some type of long-term care services in their lifetimes. And, considering that there will be 87.9 million Americans over the age of 65 by 2050, anticipate this figure to rise.

The sooner your parents plan for this, the less of a financial burden long-term healthcare will be for you and them. They can begin preparations by factoring in how much they’ll need for these costs. The current monthly median costs are:

While these may not be exact figures, it should give your parents at least a ballpark idea of what they’ll need to cover their long-term healthcare costs. Next, they need to figure out how to realistically pay for this.

“Essentially, there are four different ways to pay for long-term care: government assistance; traditional long-term care insurance; ‘hybrid’ insurance, which offers life insurance or annuity benefits with long-term care coverage; and personal savings,” clarifies Fidelity Viewpoints. “Your options depend largely on your personal and financial circumstances and what you expect for your standard of care—both now and in retirement.”

5. You’re Going to Have to Have ‘the Talk’ with Them

Just because the stats aren’t in your parent’s favor, don’t assume that they aren’t prepared for retirement. The only way you’ll truly know is by having “the retirement talk” with them.

There’s no sugarcoating this one. Having this conversation can be difficult and emotional. But, it’s one that you must have with your parents. To make it just a tad easier, here are some pointers to keep in mind:

6. You’re Going to Have to Make Sacrifices

A lot of us are struggling financially. But, we also believe that helping our parents is just the right thing to do. As a consequence, some of us may forego relationships, owning a home, traveling the world, or saving for our own retirement.

Even if you don’t go that far if you’re going to help your parents retire, expect to make some concessions. You may have to live a more frugal lifestyle or pick-up a side gig temporarily. Or, you might have to block out time each week to make sure that they’re sticking to their budget.

7. You Might Be Putting Your Financial Future in Jeopardy

A survey from the research arm of AARP found that a third of adults in their 40s, 50s, and early 60s have given money to their parents within the last year. However, “four in ten midlife adults (42 percent) expect to be doing so in the future.”

The survey also “found that over half, 54 percent, have given $1,000 or more to a parent in the last 12 months, and 20 percent have provided $5,000 or more,” writes Laura Skufca, AARP Research. This money was often used for necessities like groceries and housing.

Obviously, if you’re trying to pay off your own debt or living paycheck-to-paycheck, this can be a financial burden. And, if you’re a parent you have the additional pressure of supporting your children. “Financial support to adult children was equally striking, with 56 percent of midlife adults having provided $1,000 or more in the last year and 25 percent have contributed $5,000 or more,” adds Skufca.

If you aren’t careful, this could ruin you financially. It may even put a strain on your relationship with your family. To avoid this, first, make sure that you’re able to help them financially without derailing your own financial health. If so, meaning you can avoid debt and contribute to your own retirement, set limits on how much you’re willing to give.

If you can not help them financially, turn to resources like the National Council on Aging. The NCOA offers guidance on how seniors can manage their money and what financial aid programs are available to them. You could also do things like driving them to doctor’s appointments or helping them with household chores.

8. Mutigenerational Homes Can Be Beneficial

Let’s say that your parent(s) do not have the resources to have their own place. But, you don’t want or can’t help them financially. You could have them move in with you. In fact, since 2007, there’s been a 10 percent increase in multigenerational homes consisting of 51.4 million Americans.

While you should be aware of the drawbacks and discuss this with your current housemates, there are several benefits of living in a multigenerational home, such as:

9. They Can Still Catch-up

So, your parents haven’t been the best at saving for their retirement. All hope isn’t lost yet. They still have time to catch-up.

Also, if they plan on working later in life, even part-time, they’re allowed to keep saving in a tax-advantaged retirement account. For example, if their employer provides a 401(k), they can contribute to that plan. They should be aware that after reaching age 70 1/2, contributing to a traditional IRA is no longer permitted. But, if they have earned income, they can continue to contribute after-tax money to a Roth IRA.

Research shows a happy retirement is more than just having enough money to pay your expenses. And, when you think about it, that makes sense.

For starters, following the “honeymoon phase,” retirees have a difficult time adjusting. They no longer have a routine, sense of purpose, mental stimulation, or social interaction.

“When you have leisure all the time, it’s not as fun,” said Mitch Anthony, author of The New Retirementality and who coaches financial advisers on talking about retirement with clients. “People get bored with golf really quickly. Leisure draws its meaning from serious engagement.”

Furthermore, it’s been found that verbal memory declines 38 percent faster after retirement than it does before. “The brain’s an organ. You can’t just park it and expect it to stay sharp and lucid,” Anthony said.

So, even if your parents are set financially, make sure that they’re also addressed the non-financial aspects that will get them healthy, happy, and fulfilled. Some suggestions would be volunteering, working part-time, regular exercise, and making time to socialize with friends, family, or other members of a social club.