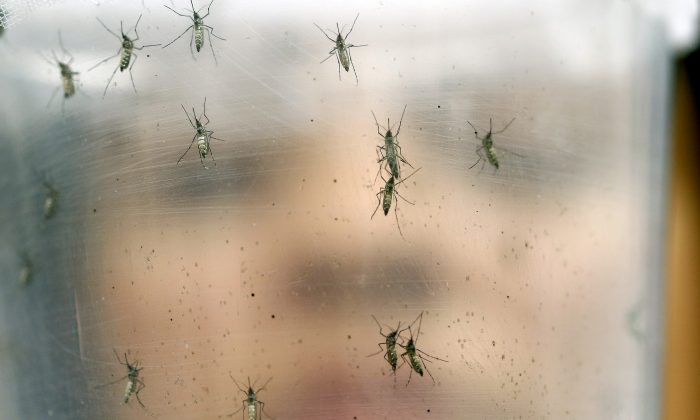 A researcher holds a container with female Aedes aegypti mosquitoes at the Biomedical Sciences Institute in the Sao Paulo's University, in Sao Paulo, Brazil, on Jan. 18, 2016. (AP Photo/Andre Penner)
Americas

RIO DE JANEIRO—The more than 3,000 health inspectors in Rio de Janeiro are stepping up inspections for mosquito breeding areas near the city’s Carnival sites as part of a bid to stem the spread of Zika, a virus linked to a rare birth defect, city hall said in a statement sent Monday.

Municipal officials said inspectors will also begin spraying insecticide around Sambadrome, the outdoor grounds where thousands of dancers and musicians will parade during the city’s Feb. 5-10 Carnival celebrations. Rio’s world-famous Carnival celebrations every year attract visitors from around Brazil and the globe.

Inspectors will also redouble their efforts to remove the stagnant waters around the city’s Olympic venues to prevent the spread of Zika’s vector, the Aedes aegypti mosquito, the statement said. It added that because the Aug. 5-21 Olympic games coincide with the dry season here, the mosquito threat will tend to be lower.

Worries about mosquitoes have reached a fever pitch since Brazilian health officials linked Zika to a spike in cases of microcephaly, a rare birth defect that sees babies born with unusually small heads and can cause lasting developmental problems. Nearly 4,000 suspected cases of microcephaly have been reported since October, compared with fewer than 150 cases in the country in all of 2014.

The U.S. Centers for Disease Control and Prevention (CDC) has advised pregnant women to reconsider travel to Brazil and 21 other countries with Zika outbreaks over fears about microcephaly.

Both Brazil’s Zika outbreak and the spike in microcephaly have been concentrated in the poor and underdeveloped northeast of the country. The statement by Rio’s city hall stressed that the area has recently not experienced particularly high numbers of cases of diseases spread by the Aedes aegypti, including dengue and chikungunya. In 2015, the city registered the second-lowest number of such mosquito-borne illnesses in the past five years, the statement said.

The statement acknowledged that because the Aedes aegypti tends to breed within people’s homes, the spread of Zika and other mosquito-borne disease largely depends on people eliminating stagnant waters in and around where they live. Unplanned urban development, irregular garbage collection and the proliferation of plastics â which provide ideal mosquito breeding grounds â have been blamed for Brazil’s problems with the insects.

In Bogota on Monday, Colombian President Juan Manuel Santos addressed the spread of Zika for the first time. He said health experts in his country expect the number of infections to peak out at 600,000 around July, producing around 500 cases of microcephaly and a similar number of incidences of Guillain-Barre syndrome, a potentially life-threatening disorder that causes rapid onset muscle weakness.

“This is an illness about which there’s very little information, it’s relatively new and there’s no known treatment” Santos said about the Zika virus after a Cabinet meeting in which the government decided it would roll out a nationwide prevention campaign.

Santos said that the spread of Zika in Colombia had coincided with an unusual jump in temperatures tied to the El Nino weather phenomenon, making it easier for mosquitoes to breed in many parts of the country.