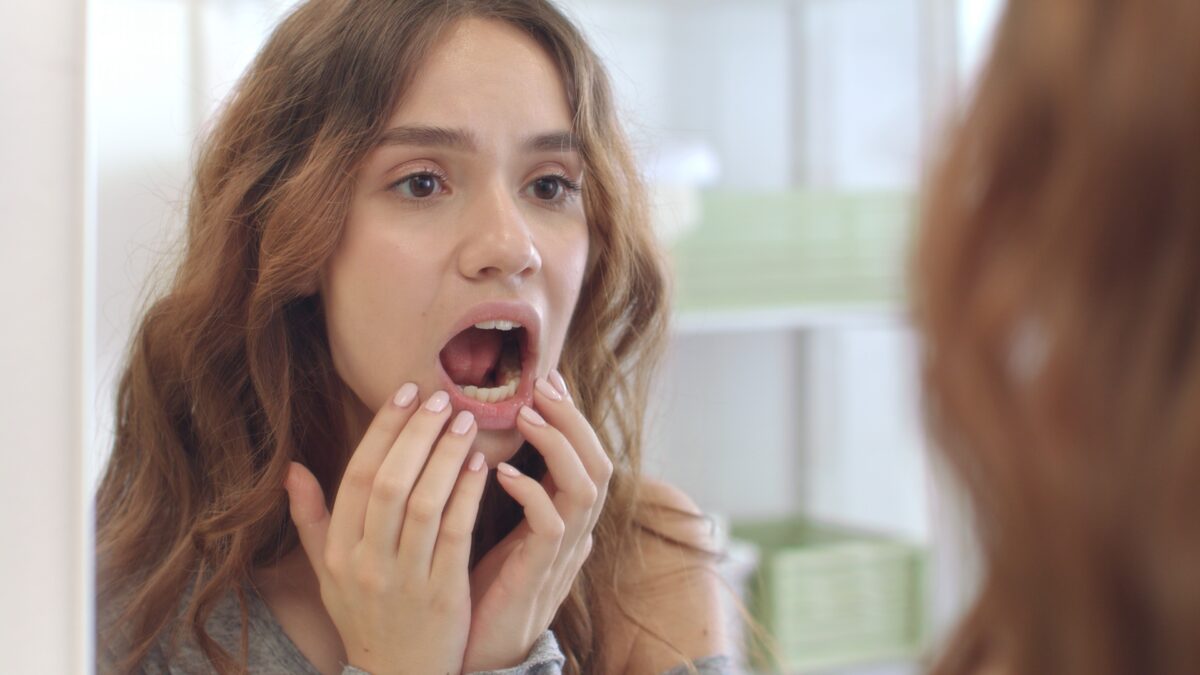 Your Teeth Shouldn’t Touch: All About Tooth Grinding

Over the past couple of years, with the pandemic and its shutdowns, work schedule interference, and indeed job loss, etc., many people naturally have developed greater levels of stress and anxiety.

Functionally, this often shows up as clenching the teeth during the day or night. The teeth are unconsciously pressed together with maximum biting force. When we eat, there is something in-between the teeth—food—which means that most often the teeth do not fully come together; but in clenching, it is full tooth-to-tooth contact.

During the day, the teeth should never be together. They do touch when swallowing but they should never remain or be pressed together. “Lips together, teeth apart” is the mantra.

Grinding the teeth usually occurs at night. The teeth are forcefully rubbed together, creating wear and tear on the enamel. Both of these habits are extra work for the jaw muscles, which like any muscle will get tired and sore, and this can result in pain being referred to the face.

Teeth with large restorations (fillings) are especially vulnerable to such large forces, and cusps will break or crack. Even perfectly sound teeth can microscopically split in half under this stress. Although the tooth may appear intact, tests will reveal the two halves can move independently, causing pain when biting.

However, stress is not the only causative factor in tooth grinding. It has been shown to be a jaw developmental problem, in that the jaw has not developed to its full genetic potential.

Our teeth, like any other component of our bodies, are designed and engineered to fit into their designated positions in the oral cavity. We grow, and things fit into place—that is nature’s plan.

If our ribs were bunched up together or overlapping, we would consider that rather alarming. When our teeth do that, it is considered rather commonplace or “genetic.”

A Crowded Mouth, and How Diet ‘Exercises’ Your Jaw

At a very fundamental level, a soft diet does not allow our genetic potential to manifest. To solve this problem, we do not need to return to the primitive diets of “underdeveloped” communities (who usually have perfect jaw development and no decay), but we do need to remember that breakfast cereal or pureed food, for example, does not take much muscular effort to ingest, either for children or adults.

There are now publications such as “Baby-Led Weaning” that address a successful transition from a soft to a “harder” type of diet for babies.

With crowded and underdeveloped dental arches there is less space for the tongue, which impacts the airway. As a compensation, in order to facilitate breathing, the jaw is obliged to drop down so that mouth-breathing can replace the restricted nasal passageway. Air is “conditioned” and warmed by the nasal passages in preparation for entry into the lungs. Tonsils and adenoids are now obliged to fulfill that role, and they enlarge as a result of their effort to try to cleanse the air we breathe in through the mouth. This enlargement further limits the space available at the back of the mouth for the air that we need, compounding the problem.

So, in order to further assist breathing, the head tilts forward, but this chronic poor forward head posture creates head and neck pain.

With sleep, the muscles relax, and the tongue drops back. But in the cases of a narrow airway, this cuts off that airway as there is no room for the tongue to fit into the underdeveloped palate. A tongue-tie will compound the problem.

Tongue-tie (ankyloglossia) is when the thin strip of tissue called the lingual frenulum connecting the tongue and the floor of the mouth is thicker or shorter than normal. This restricts the movement of the tongue. (The part of the baby’s tongue responsible for suction is the middle of the tongue, rather than the tip). Ankyloglossia has been associated with difficulties with breastfeeding and problems with speech, and also general facial development and swallowing mechanics.

Myofunctional therapy will usually be required if the tongue-tie is released for older children or adults. This involves tongue and general mouth exercises, usually commenced before the surgery to strengthen the tongue as it has been idle or weak from lack of normal activity. The myofunctional exercises can also sometimes directly correct some early orthodontic conditions just by doing these exercises alone, while addressing poor facial musculature.

Dr. Jerald H. Simmons is a specialist in sleep medicine. He deals with sleep apnea, etc., but snoring and grinding the teeth are related subjects.

Polysomnography (PSG) is a study or test done while you are asleep. A sleep doctor will observe you as you sleep and record data about your sleep patterns in order to identify any sleep disorders present.

So, in sleep tests, Dr Simmons added other procedures to the PSG protocol. He included both thoracic and esophageal leads to measure airflow and pressure. He could record airflow pressure through the esophagus, trachea, and electromyography (EMG) muscle activity by attaching leads to the jaw muscles.

Dr Simmons and others determined that bruxism is an airway protection mechanism.

Then the masseter muscles fire to close the jaw, but that is also unsuccessful in decreasing the airflow resistance. The other jaw muscles begin to work, and this moves the mandible (lower jaw) in various directions. This in turn allows the tongue to move around and so periodically, air is able to slip in behind the tongue. When this protective mechanism—bruxing (which is clenching and grinding the teeth)—becomes successful, the problem is temporarily overcome, and so the bodily emergency can be cancelled. The muscles relax but the mouth is still closed, and so the nasal airflow resistance will increase again and the procedure is repeated. The body is trying to get air past the tongue by this mechanism all during the night.

The jaw muscles are part of the “fight and flight” reaction. You have stopped breathing! Naturally it is an emergency situation if you can’t breathe, so the body has learned to overcome this by moving the jaw from side to side to open the airway. This bruxing is successful in that, at least, it allows you to breathe again. The cycle is repeated endlessly all night, so you get very little, or poor quality, sleep. You wake up feeling exhausted, and your teeth are damaged.

So, a sleep test is done, and you may be provided with a CPAP machine (continuous positive airway pressure), which provides a current of air into your airway with a mask—although not everyone can tolerate the mask. Alternatively, or in conjunction, a Mandibular Advancement Appliance, (MAD) may be indicated. Wearing this holds the lower jaw slightly forward during the night, and this allows some room for the tongue to also come forward. A mouth guard worn to protect the teeth is usually not as effective as the MAD for this scenario, but it may help.

When this new jaw posture is shown to be successful, long-term stabilization can be obtained by orthodontic procedures that expand the upper and lower jaws, and so also the palate. During this process, adults who have had teeth removed in childhood to correct crowding will actually develop spaces where those teeth originally were. Teeth were traditionally removed from the premolar areas (behind the canine teeth). These newly developed spaces appearing after corrective orthodontics can be filled using traditional techniques or just be allowed to remain, depending on the aesthetics or patient preference.

Many chronic conditions in children, and also in adults, resolve with these procedures. Bed-wetting and behavioral problems from lack of sleep significantly affect a child’s development.

Cone-beam computed tomography systems (CBCT) are a variation of the traditional computer tomography (CT) systems. The CBCT systems used by dentists rotate around the patient, capturing data using a cone-shaped X-ray beam. This data is used to construct a three-dimensional image of not only the teeth, but also the mouth, jaw, neck, nose, and throat.

The important area for breathing, especially in regards to sleep, is the throat region connecting the nasal passageway to the lungs, and the available space can be measured using CBCT before and after X-rays. This space is often very narrow in some people with these breathing problems. After orthodontic or MAD appliance therapy, this narrow airway will be seen to have either been slightly or significantly enlarged, enabling the air to flow with less restriction. Even minor expansion can create significant improvement in nasal breathing.

So, wearing a mouth guard type of appliance at night can significantly protect the teeth from tooth grinding, and more specialized appliances may actually allow you to breathe.

Ted L’Estrange
Follow
Ted L’Estrange BDSc, LDS, RCS, practiced dentistry in both Australia and the United Kingdom for over 40 years and conducted a sessional TMJ clinic at the British School of Osteopathy for 7 years. He studied Rehabilitation Neuro-Occlusal in Barcelona, Spain with Dr Pedro Planas.
SHARE
Friends Read FreeCopyFacebookTweet
You May Also Like