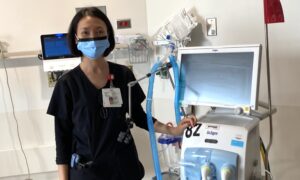 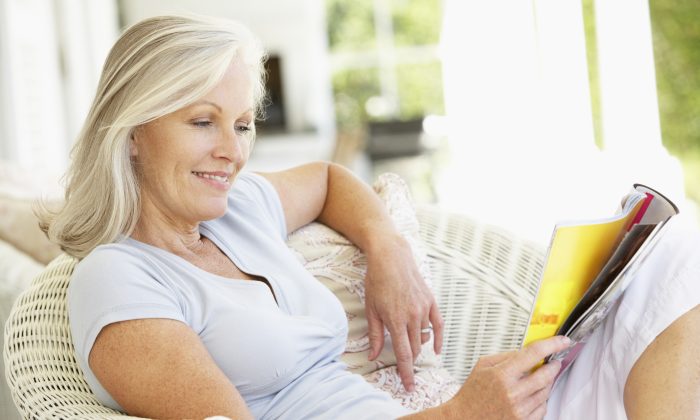 Have you been increasingly struggling to read menus or the newspaper because you can’t make out the font? Or maybe you have to fumble for your eyeglasses before checking your iPhone because the screen always looks blurry?

If so, a tiny implantable lens may be able to help.

The KAMRA Inlay, is a small and thin lens that is implanted in the cornea via laser surgery. It measures 3.8 millimeters in diameter with a hole or aperture in the center that’s 1.6 millimeters.

“[It’s] about a third of the size of a standard contact lens, and it weighs less than a grain of sand,” said Dr. Steven Stetson, the medical director of the Diamond Vision clinics.

Dr. Stetson and his team began offering the procedure, which improves near vision, in May after they had sufficiently vetted it.

“We’re just so excited about the procedure,” Dr. Stetson said.

Dr. Stetson and Diamond Vision were specifically selected last year to perform the inlay procedure by AcuFocus, the medical device company that developed the technology. AcuFocus only selects the skilled surgeons and facilities that it knows and trusts, he said.

But Dr. Stetson deferred the opportunity because he wanted assurance that the KAMRA inlay was a safe option.

“I like the results that are coming out and I’m ready to jump in now with both feet,” he said. “I feel very confident about it.”

In its current form, the inlay has been on the international market since 2009 but was only approved by the FDA last April. Dr. Stetson said that since then more than 2,000 inlays have been implanted in patients across the country with significant success.

The inlay works like a small camera aperture or the pinhole test your eye doctor does, and improves vision by focusing light coming into the eye.

“If you go to your eye doctor and they flip down that little pin hole and you look through it, then all of a sudden your vision gets better,” Dr. Stetson explained.

The inlay is made from a high density, strong, but very light plastic called polyvinylidene fluoride, a compatible material commonly used for eye implants.

Surrounding the central opening are 8,400 microscopic holes that allow oxygen and nutrients to flow naturally through the cornea—which the cornea needs in order to refract light properly.

The inlay is put only in the non-dominant eye, which then regains near vision. Near vision in just one eye is enough for you to see close up. Both eyes preserve their distance vision.

To implant the lens, the surgeon makes a pocket in the deeper layers of the cornea using a femtosecond laser, the same laser technology used to make flaps in LASIK procedures.

“We would put the inlay into that channel that we’ve created and it just stays right there,” Dr. Stetson said.

The inlay parallels the curvature of your cornea allowing it to sit securely in place and it doesn’t change anything structurally, he said.

He said implanting the inlay is a snap.

“I’ve done a lot more tricky procedures than this,” he said.

The entire procedure takes about 15 to 20 minutes to complete and is “very simple and painless.”

And your near vision will stay clear for as long as the inlay stays in the pocket.

“This is a visual solution for their lifetime,” Dr. Stetson said.

Unlike LASIK surgery where patients see significant improvement overnight, most patients who get the KAMRA inlay see improvement after about two to three weeks.

For Those Under 45, an Alternative to Lenses and LASIK

“This inlay is occupying space and there’s some fluid around the inlay that has to come to rest,” Dr. Stetson explained.

The KAMRA inlay can be removed if need be but this is rare. In the United States only 1.6 percent of patients have theirs removed, so even though there can be some side effects, the majority of patients choose to stay the course.

Dr. Stetson said, “Even patients who take a little longer [to see results] don’t want to explant this.”

The basic side effects such as dryness, seeing some ghosting on images or a glare effect are similar to what people experience after LASIK surgery. In rare cases, there could be some scarring, but Dr. Stetson said that happens less than 1 percent of the time.

People who have a cataract or already struggle with dry eye should get treatment for those conditions before getting an inlay, he said.

Diamond Vision is currently the only center in Manhattan where KAMRA inlay procedures are being performed.