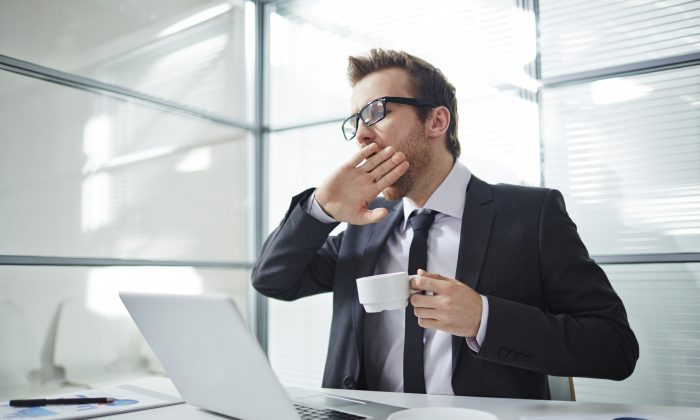 Your Polluted Office May Be Causing You to Feel Sleepy

Do you work in an office where people often need to go outside for a walk or frequently step out for a cup of coffee? Or how about that afternoon lull right around 2 p.m. when you feel like you need to take a nap?

The air quality of the building you work in may be contributing to your drowsiness, and researchers recently found that improved air quality could greatly enhance workers’ cognitive-function performance.

Thanks to commercial energy efficiency measures that started in the 1970s to combat the rising cost of energy, many conventional offices nowadays have minimal ventilation. Airtight buildings elevate the concentration of indoor pollutants and CO2, and increase the potential for poor indoor environmental quality (IEQ), according to a new study released Oct. 26.

In addition to the ventilation rates being decreased in the 1970s, other factors such as humidity, the presence of chemical-emitting materials and other workspace influencers, and personal issues like job stress and allergies, all contributed to workers experiencing sick building syndrome (SBS) and other building-related illnesses.

Today there is an emphasis on sustainable design or “green” building. Commercial buildings are still being designed to be more energy efficient, but with enhanced IEQ. During the study, conducted for six days in November 2014, researchers exposed 24 participants to various simulated building conditions as the volunteers performed normal office work.

They controlled indoor ventilation with outdoor air, CO2, and volatile organic compounds (VOCs), which are largely human-made chemicals emitted as gases from many products including those that might be in many offices such as paints, adhesives, aerosol sprays, cleaners, and air fresheners. They are characterized as having a high vapor pressure.

All nine cognitive functions tested were significantly better in the Green+ environment when compared to a Conventional environment.

For seven of the nine cognitive functions, average cognitive scores decreased as the CO2 levels increased. However, they concluded that the difference in scores between Conventional, Green, and Green+ conditions depended on the building.

Researchers conclude that their findings could have wide-ranging implications because the study was designed to reflect conditions that are commonly encountered every day in many indoor environments, including homes, schools, and airplanes.