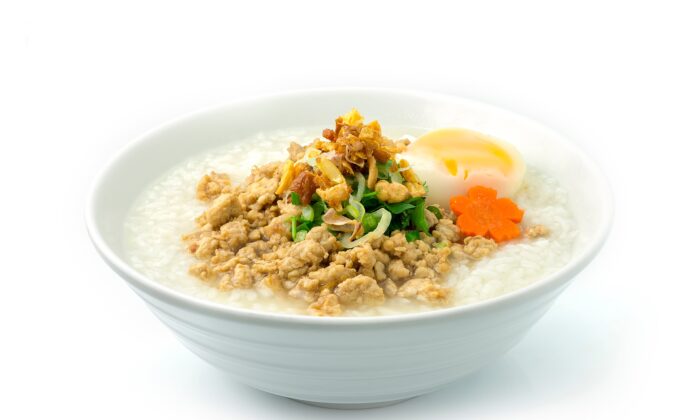 Congee, a savory rice porridge, is a nourishing dish perfect for the season. (VimilkVimin/Shutterstock)
Mind & Body

Your Last Chance to Store Extra Nutrients Before the Coming Spring

With the freezing ice storms parts of the country have been having this January, it isn’t hard to identify with the current solar term, “Major Cold,” which runs from Jan. 20 to Feb. 2.

Ancient Chinese people considered the cold to be critical for agriculture, forestry, fisheries, and animal husbandry. The ancients saw how the extreme cold—when the earth is frozen to its deepest level—was necessary for killing off insects and bacteria, so that when spring came, pest problems were minimized.

Major Cold was also a time to look forward to a very important festival, known as Bodhi Day, which is still celebrated on Jan. 24, according to the traditional Chinese calendar. The occasion marks the day Buddhism’s founder, Shakyamuni, reached enlightenment under a bodhi tree.

This was a major commemoration in China after Buddhism was spread there in the early sixth century, and it became an important royal ceremony during the Qing Dynasty (1644–1911). Qing emperors conducted the ceremony at the Yonghe Temple in Beijing, which was completed in 1694 by the great Qing Emperor Kangxi.

One of the main activities of Bodhi Day involved eight days of preparing a giant pot of congee for the celebrations. The congee, a kind of savory rice porridge cooked with plenty of water, would be shared widely among royals and members of the court.

Congee was also eaten on the day of the ceremony in households across the nation. And while this highly nourishing food was symbolic, due to it being a restorative food that helped Shakyamuni reach enlightenment, it also happened to be the perfect type of food to eat during Major Cold.

Major Cold is the last solar term in the Chinese calendar year, and it is also the last chance to supplement our bodies with extra nutrients. During winter, our body stores energy and nutrients to use in the spring. Spring is the time to grow, and the body shifts to using the energy it has stored during winter to fuel that growth.

Thick, warm soups such as congee, with purely vegetarian ingredients or lean meats, are suggested. It is encouraged to avoid overly greasy or fatty foods, as these will block the necessary yang energy from rising in the coming spring or clog the blood veins for other problems.

Chinese people would also preserve garlic in vinegar on this day, which would take about a month before it would be ready to eat. A little sugar was also added to the vinegar to help it ferment. Fermented garlic is less stimulating, or heat inducing, which makes it more suitable to consume in the upcoming spring season.

Other good foods for the season are warming foods such as black beans, eggs, duck, lamb, fennel, mushrooms, sesame, walnuts, and yams. The spices anise, cinnamon, fennel, cumin, oregano, and nutmeg are all helpful as seasonings or taken as a tea.

There are three major areas of our bodies that ancient Chinese wisdom advises to keep warm during Major Cold: the respiratory system, neck and spine, and feet. Aren’t these exactly the areas we tend to protect when we go out in the cold?

When you’re outside, remember to keep both your nose and chest toasty by wearing layers of warm clothing and a scarf.

Your spine and lower back are particularly susceptible to the cold, according to traditional Chinese medicine theory. Wear longer tops and sweaters during this season to avoid imbalances, and if you need to bring heat back into the area of your lower back, apply a heating pad, a hot water bottle, or simply use a hair blow dryer to keep the area nicely warm.

To protect your feet, wear warm boots and always keep your feet covered. This is especially important for the elderly.

Having a foot bath with very warm water before sleep is also a nice ritual during this time of the season. To boost the effects, add fresh ginger, freshly ground cinnamon, or black peppercorns to the water. You can also place two golf balls in the water, and press the bottoms of your feet firmly onto the balls, concentrating on the center of each foot. This assists in getting good quality sleep and keeping the body warm at night.

Traditionally, it is also best to get plenty of sleep and rest during the cold period. Restrain sexual activities to preserve the yang energies of the body for growth in the spring.

Here’s to keeping you in your best health for the whole year.

Epoch Times contributor Moreen Liao is a descendant of four generations of traditional Chinese medicine doctors. She is also a certified aromatherapist, former dean of the New Directions Institute of Natural Therapies in Sydney, and the founder of Ausganica, a certified organic cosmetic brand. Visit Ausganica.com.au