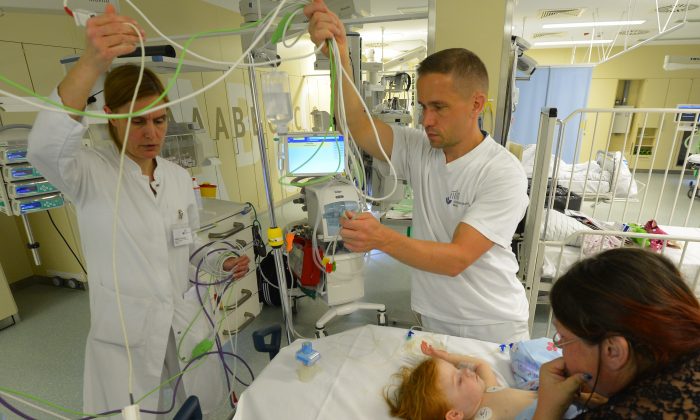 A mother comforts Laura Loreen, one of her two twin daughters, before both girls were to receive ear surgery at the Unfallkrankenhaus Berlin (UKB) hospital in Marzahn district on June 17, 2013 in Berlin, Germany. The UKB hospital has among the most modern emergency care services in Germany. (Photo by Theo Heimann/Getty Images)
Good to Know

Anesthesia during early childhood surgery poses little risk for intelligence and academics later on, the largest study of its kind suggests.

The results were found in research on nearly 200,000 Swedish teens. School grades were only marginally lower in kids who’d had one or more common surgeries with anesthesia before age 4, compared with those who’d had no anesthesia during those early years.

Whether the results apply to sicker children who have riskier surgeries with anesthesia is not known. But the researchers from Sweden’s Karolinska Institute and doctors elsewhere called the new results reassuring, given experiments in young animals linking anesthesia drugs with brain damage.

Previous studies of children have been relatively small, with conflicting results. The new findings, published Monday in JAMA Pediatrics , don’t provide a definitive answer and other research is ongoing.

The study authors and other doctors say the harms from postponing surgery must be considered when evaluating any potential risks from anesthesia in young children.

The most common procedures in the study were hernia repairs; ear, nose or throat surgeries; and abdominal operations. The researchers say the operations likely lasted an hour or less. The study did not include children with other serious health problems and those who had more complex or risky operations, including brain, heart and cancer surgeries.

The researchers also looked at IQ tests given to Swedish boys at age 18 upon joining the military. Scores were about the same for those with one early surgery and the non-surgery group; scores were less than 3 percent lower in boys with three or more early surgeries.

The researchers, led by Karolinska’s Dr. Pia Glatz, noted that factors other than anesthesia appeared to have a much greater impact on academics and intelligence measures, including mothers’ education level.

A journal editorial says the results mean it is unlikely that early anesthesia poses a long-term risk. The study is “reassuring for children, parents and caregivers and puts the issue of anesthetic-related neurotoxicity and the developing brain into perspective,” the editorial says.