‘You Can Have Heaven on Earth If You Live Your Life the Way Shen Yun Is Portraying It,’ Says Award-Winning Architect 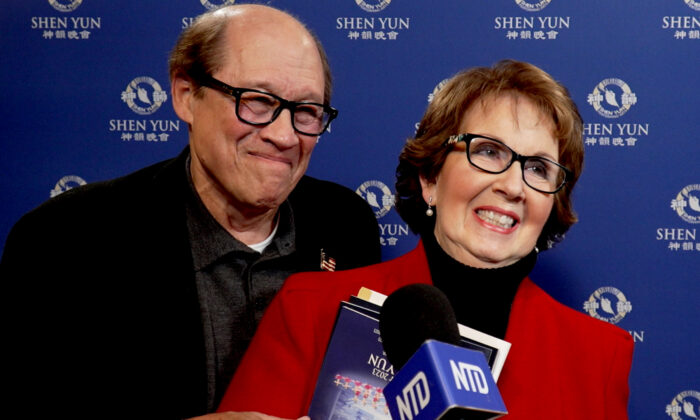 FAIRFAX, Va.—Robert Dale Lynch is an award-winning architect whose work is driven by an appreciation and search for beauty and humanity. On Jan. 21, Mr. Lynch had an enlightening experience being immersed in beauty while seeing Shen Yun Performing Arts.

“I’ve been trying to get my whole family. I wanted my whole family to be here tonight. I got the tickets for Shen Yun as a Christmas present from Anne, and I just couldn’t wait. I couldn’t sleep last night wanting to get here and I was afraid in the traffic that we would be late. We just made it,” he said at the George Mason University Center for the Arts in Fairfax, Virginia after attending the performance with his wife Anne.

After the experience, he said he was filled with gratitude, enthusiasm, and support, and wanted to express it. Having not known much about Chinese culture or history prior to Shen Yun, he was “amazed at how beautiful” the culture and virtues were.

Mr. Lynch said he was moved by “the desire, the deep desire in the Chinese people to bring back what they’ve had.”

“I’m so amazed that the great parallel between the Chinese culture of 5000 years, and our Western culture, the philosophy of truth, and compassion, and forbearance is very much Christian thinking too. And I’m amazed at it. And I hope the Chinese can bring back [that]. and I believe that Shen Yan is doing a wonderful, wonderful job,” he said.

Mrs. Lynch said she felt Shen Yun influenced “our own country as well, to come back to its Christian roots.”

The couple described the joy they saw in Shen Yun’s performance as one tied to the divine and vital to humanity.

“It’s important for life, it’s important for us to have successful living for us to have heaven on earth. Seeing the communists running across the stage, I noticed none of them danced. Only only the good Chinese are dancing,” Mr. Lynch said. Several of Shen Yun’s dance vignettes are story-based, set throughout its 5,000 years right up to the present day showing events from today’s China.

They danced “because they were full of joy,” Mrs. Lynch added.

“Exactly. Full of joy,” Mr. Lynch said. “And that’s how you want to live your life. You can have heaven on earth if you live your life the way Shen Yun is portraying it.”

The couple were full of praise for Shen Yun’s production.

Every Shen Yun performance includes over a dozen dance vignettes of not just classical Chinese dance, but folk and ethnic dances from China’s 50-some minority groups. The performances also include solos by vocalists singing Chinese lyrics in the authentic bel canto style, another art form in which Shen Yun has pioneered a revival. Of particular interest to many audience members is the classical orchestra that highlights Chinese instruments and melodies, and the patented backdrop technology merging screen and stage.

“It was just a delightful evening,” said Mrs. Lynch. “The costuming was so magnificent. And the setting it was just like nothing we’ve ever seen before.”

“The melding of the people on stage, and such a beautiful, smooth blending with the video creation behind, and to see that it’s patented. I’m glad that it was patented, so wonderful a device,” Mr. Lynch said. “I can see this, this being carried forth in other ways in the future. … It’s a powerful force and I congratulate Shen Yun for its invention, its creativity.”

Mr. Lynch said the female vocalist was “so powerful, extremely powerful,” and the male soloist “had an awful lot of soul, expression in his presentation. They carried me away.”

A story that moved from tragedy to hope brought him to tears. “I can’t remember the last time I cried. But when the young girl was killed … tears were running down my face. And I’m not embarrassed by it. But it hasn’t happened in my memory. I can’t remember ever having cried like that,” he said.