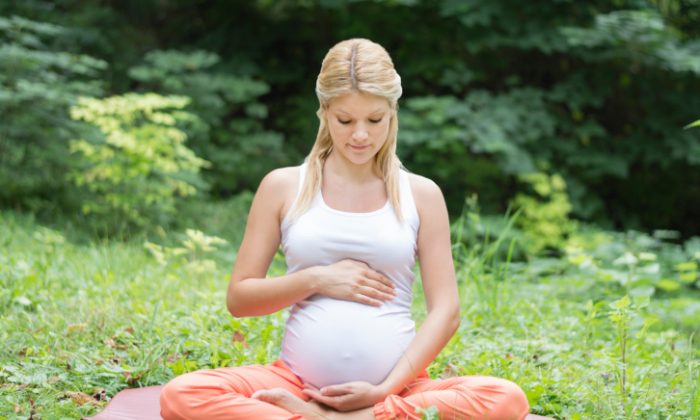 A small pilot study finds evidence suggesting that yoga could help pregnant women with significant depression reduce the severity of the mood disorder.

Lead author Cynthia Battle says she learned in prior research that depressed pregnant women are often reluctant to use medications and some also have difficulty engaging in individual psychotherapy. When she asked them what other treatments they might find appealing, some mentioned yoga.

“This is really about trying to develop a wider range of options that suit women who are experiencing these kind of symptoms during pregnancy,” says Battle, associate professor of psychiatry and human behavior in the Alpert Medical School of Brown University and a psychologist at Butler and Women & Infants hospitals.

“What we don’t want to do is have people fall through the cracks.”

A few small studies have also suggested that yoga and mindfulness-based approaches could help prevent or treat depression during pregnancy.

Battle’s study, published in the journal Women’s Health Issues, is an initial test of whether a 10-week program of prenatal yoga, structured to be similar to yoga programs available to pregnant women in many communities, could be feasible, acceptable, safe, and effective for mild to moderately depressed women.

“What we feel like we’ve learned from this open pilot trial is that prenatal yoga really does appear to be an approach that is feasible to administer, acceptable to women and their healthcare providers, and potentially helpful to improve mood,” Battle says. “We found what we think are very encouraging results.”

Can Yoga Play a Role in Treating Bipolar?

In the newly published pilot study, they worked with Rhode Island obstetricians and midwives to recruit 34 pregnant women with elevated depression symptoms. Women attended a program of prenatal yoga classes tailored for pregnant women by registered yoga instructors. Coauthor Kaeli Sutton, for example, is a yoga expert who specializes in working with pregnant and postpartum women.

In addition to practicing yoga and mindfulness during the classes, women were also encouraged to do so at home.

At regular points during the 10-week study, the researchers measured depressive symptoms in the women, participation in yoga classes, home yoga practice, and changes in mindfulness, again using a standardized questionnaire.

Only four women engaged in any other treatment for depression. The prenatal yoga program did not include any type of counseling or psychotherapy specifically to address depression.

All subjects received written medical clearance from their prenatal care provider before participating, and the researchers asked women at regular intervals about any adverse effects, such as physical strain or injuries, throughout the study. The women reported none.

Pregnant on the NYC Subway: ‘Please, Sir, May I Have Your Seat?’

Though there was no control group to compare against, the study provides signs that prenatal yoga could be helpful, Battle says. One was the degree to which depressive symptoms declined during the 10-week program on two standardized scales.

On the “QIDS” scale, in which a trained, objective rater evaluates responses, the women on average dropped from scores consistent with moderate depression (10-15) to scores well into the mild range (5-10). On the “EPDS” scale, which relies on self-reports, average scores fell similarly, from a level consistent with clinically significant depression (more than 10) to scores significantly under that threshold.

The study data also show that the more prenatal yoga pregnant women did, the more they benefitted psychologically. It’s the first study showing a proportional association.

The researchers also measured significant changes in some attributes of mindfulness, which many researchers believe is one mechanism by which yoga may reduce depression. Mindfulness involves directing one’s attention to the present moment, noticing thoughts, feelings, or sensations, and avoiding judgment of those experiences.

Gathering more definitive evidence about how yoga and mindfulness may affect mood in pregnant women is a priority for the planned randomized, controlled trial. Battle says that five-year study design also calls for measuring levels of pro-inflammatory cytokines, which are biomarkers of stress.

The results of the pilot study show that a larger trial would be worthwhile, Battle says.

“This is not the definitive study where we can say that this is an efficacious frontline treatment, however it is a study suggesting that we know enough now to warrant the next, larger study,” she says. “This is an important first step in trying to understand if this is a potentially viable treatment approach.”

Women should consult a healthcare provider before pursuing any remedy for depression, the researchers note.