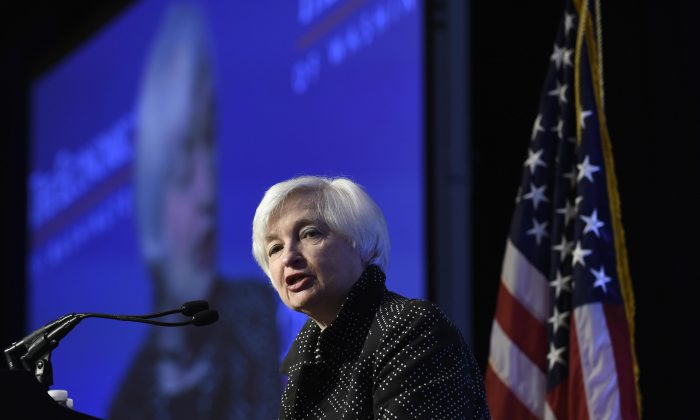 Federal Reserve Chair Janet Yellen speaks at the Economics Club of Washington in Washington, D.C., Wednesday, Dec. 2, 2015. Yellen indicated that the U.S. economy is on track for an interest rate hike this month, but the Fed will need to review incoming data before making a final decision. (AP Photo/Susan Walsh)
Business & Economy

Yellen Confident in Economy Ahead of Expected Rate Hike

WASHINGTON—Federal Reserve Chair Janet Yellen on Wednesday indicated that the U.S. economy is on track for an interest rate hike this month, but she said the Fed will need to review incoming data before making a final decision.

Yellen gave an upbeat assessment of the economy’s progress since the Fed’s last meeting in October, describing it as in line with its expectations for the labor market and inflation.

But she added that policymakers need to be cautious in deciding when to start raising rates given that the Fed doesn’t have much room to cut them if the economy begins to falter.

Yellen’s comments in a speech to the Economic Club of Washington came two weeks before the Fed’s final meeting of the year on Dec. 15-16. The central bank is widely expected to raise interest rates for the first time in nearly a decade. The Fed’s benchmark rate has been at a record low near zero for the past seven years.

Paul Ashworth, chief U.S. economist at Capital Economics, said Yellen was “quite explicit in making the case” for a December rate hike.

In her speech, Yellen said that the economy has recovered “substantially” since the Great Recession of 2007-2009, and she expressed confidence that it will continue growing at a pace strong enough in coming months to further boost the labor market.

“When the (Fed’s policy committee) begins to normalize the stance of policy, doing so will be a testament … to how far our economy has come in recovering from the effects of the financial crisis and the Great Recession,” Yellen said.

Yellen stressed that the pace of future rate hikes was more important than the timing of the first move, which would still leave rates at historically low levels. She reiterated that the pace of subsequent increases was likely to be gradual, meaning that rates for consumer and business borrowers will remain favorable for a while.

In response to a question, Yellen rejected a suggestion that the Fed might follow the pattern set under former-Chairman Alan Greenspan. During the last round of rate hikes, the Fed boosted rates by regular quarter-point moves at 17 meetings from June 2004 to June 2006.

“It’s very important for me to emphasize that there is no such plan” to proceed in such a “mechanical or calendar-based way,” Yellen said. “The actual path will depend entirely on how incoming data affect our outlook.”

When the Fed votes, Yellen said she will not be concerned if the 10 voting members of the Fed’s policy committee are not unanimous. While the panel does try to find “common ground,” she welcomes different views and wants to guard against the danger of “group think” which could lead to bad decisions.

While the unemployment rate fell in October to a seven-year low of 5 percent, Yellen said she did not believe the labor market was at “full employment” yet because there are still too many discouraged workers who have given up looking for a job. Wage growth is also weaker than it should be, and too many people who want full-time work can only find part-time jobs, she said.

She said she was also optimistic that inflation, which has been running below the Fed’s 2 percent target, would start moving higher as the temporary impacts of a stronger dollar and falling energy costs begin to fade.

“I anticipate continued economic growth at a moderate pace that will be sufficient to generate additional increases in employment, further reductions in the remaining margins of labor market slack, and a rise in inflation to our 2 percent objective,” Yellen said.

In addition to her Wednesday speech, Yellen is scheduled to testify on the economy before the Congressional Joint Economic Committee on Thursday.