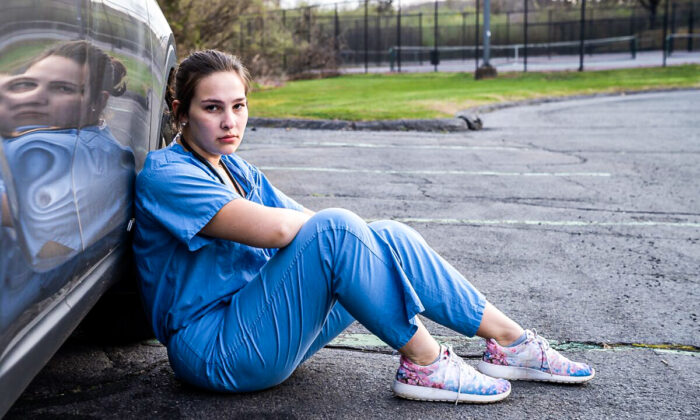 In parts of the country where COVID-19 continues to fill hospitals, a rotating cast of traveling nurses helps keep intensive care units fully staffed. Hospitals have to pay handsomely to get that temporary help, and those higher wages are tempting some staff nurses to hit the road, too.

Nearly two years into the pandemic, there’s some truth in a joke circulating among frustrated ICU nurses: They ask their hospitals for appropriate compensation for the hazards they’ve endured. And the nurses are rewarded with a pizza party instead.

Theresa Adams said that’s what happened at the Ohio hospital where she worked. The facility across town was offering bonuses to keep its nurses from leaving, but not hers. They got a pizza party.

“I heard a lot of noise about ‘Well, this is what you signed up for.’ No, I did not sign up for this,” she said of the unparalleled stress brought on by the pandemic.

Adams is an ICU nurse who helped build and staff COVID units in one of Ohio’s largest hospitals. She recently left for a lucrative stint as a travel nurse in California.

Travel nurses take on temporary assignments in hospitals or other health care facilities that have staffing shortages. The contracts typically last a few months and usually pay more than staff positions.

Adams hopes to return to her home hospital eventually, though she’s irritated with management at the moment.

“I did not sign up for the facility taking advantage of the fact that I have a calling,” she said. “There is a difference between knowing my calling and knowing my worth.”

A reckoning may be on its way as hospitals try to stabilize a worn-out workforce.

The use of traveling nurses took off in the 1980s in response to nursing shortages. Although they’ve always been paid more for their flexibility, some traveling ICU nurses can now pull in as much as $10,000 a week, which can be several times more than staff nurses earn.

While some hospitals have offered retention bonuses or increased pay for permanent staff members, nurses say it doesn’t compare to the financial bonanza of traveling. Hospital managers now find themselves trapped in a pricey hiring cycle—competing for, in particular, the most highly trained critical care nurses who can monitor COVID patients on the advanced life-support devices known as ECMO (extracorporeal membrane oxygenation) machines.

“Our turnover for ECMO nurses is incredible, because they’re the most seasoned nurses. And this is what all my colleagues are facing, too,” said Jonathan Emling, a nurse and the ECMO director at Ascension St. Thomas Hospital in Nashville, Tennessee.

The shortage of ECMO nurses has prevented the hospital from admitting additional COVID patients who need their blood oxygenated outside their bodies, he said. No more staff nurses have enough experience to start the training.

“We will train these people and then six months later they will be gone and traveling,” Emling said. “So it’s hard to invest so much in them training-wise and time-wise to see them leave.”

And when they leave, hospitals are often forced to fill the spot with a traveler.

“It’s like a Band-Aid,” said Dr. Iman Abuzeid, co-founder of a San Francisco nurse recruiting company called Incredible Health. “We need it now, but it is temporary.”

Incredible Health helps to quickly place full-time staff nurses in some of the country’s largest health systems. The number of listings for full-time, permanent nurses on the company’s platform has shot up 200 percent in the past year.

To help hospitals, some states are chipping in to hire travel nurses. But for many hospitals, the higher costs are straining their budgets, which is especially difficult for those that have suspended elective surgeries—often a hospital’s biggest moneymaker—to accommodate COVID patients.

“Every executive we interact with is under pressure to reduce the number of traveler nurses on their teams, not just from a cost standpoint but also from a quality-of-care standpoint,” Abuzeid said.

It’s hard on morale as well: Camaraderie suffers when newcomers need help finding syringes or other supplies but may be paid two or three times as much as the staff nurses showing them the ropes.

Some hospitals are trying to stop the turnover by offering big signing bonuses to permanent nurses, as well as loan forgiveness or tuition assistance to pursue additional education. Hospitals have also boosted pay for nurses as they earn certifications, especially in critical care.

Other medical centers are looking outside the United States.

Henry Ford Health System in Michigan announced plans to bring in hundreds of nurses from the Philippines. Smaller community hospitals are looking abroad, too. City-owned Cookeville Regional Medical Center, in a Tennessee town of 35,000, is now recruiting its first foreign nurses.

“The cost for what we pay for a local recruiter to bring us one full-time staff member is more expensive than what we are going to be spending to bring one foreign nurse,” said Scott Lethi, chief nursing officer at Cookeville Regional.

Lethi hopes the staffers from overseas will decide to stay more than a year or two. He said even new nurses sometimes leave or burn out: Cookeville hired a few recent graduates of U.S. nursing programs who quit after just a few months.

Among ICU nurses of all ages, two-thirds have considered leaving the profession because of the pandemic, according to a survey published in September by the American Association of Critical-Care Nurses.

When a nurse leaves—whether to retire, become a travel nurse, or work in another field—the remaining nurses can be stretched dangerously thin, caring for more patients at once. COVID patients are particularly demanding, especially those on ventilators or ECMO machines who may require around-the-clock, one-on-one care. COVID patients may be hospitalized for weeks or months.

“My ability to care for people has suffered. I know that I have missed things otherwise I would not have missed had I had the time to spend,” said Kevin Cho Tipton, an advanced practice nurse in the South Florida public health system. “Many of us feel like we’re becoming worse at our jobs.”

The worry about providing substandard care weighs heavily on nurses. But in the end, Tipton said, it’s the patients who suffer.

This story is part of a partnership that includes WPLN, NPR, and KHN.

Blake Farmer covers health care in Nashville, reporting on the region’s unique health challenges as well as the city’s concentration of health care companies. He’s been with Nashville Public Radio since 2007. KHN (Kaiser Health News) is a national newsroom that produces in-depth journalism about health issues. Together with Policy Analysis and Polling, KHN is one of the three major operating programs at KFF (Kaiser Family Foundation). KFF is an endowed nonprofit organization providing information on health issues to the nation.