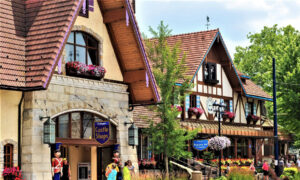 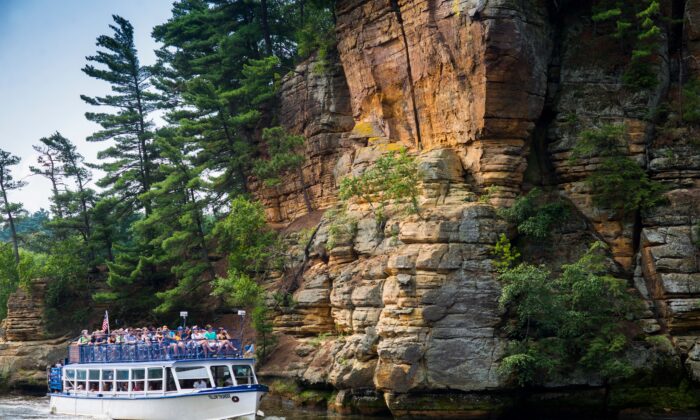 Boat tours explore the beauty of the Wisconsin River and its surroundings. (Courtesy of Wisconsin Dells Visitor & Convention Bureau)
Destinations

Forests, rivers, and sculpted rock are minutes away from popular waterparks
By Kevin Revolinski

Henry Hamilton Bennett, a carpenter, lost use of his hand while serving in the Civil War, and thus, a dramatic Ice Age river gorge became the Waterpark Capital of the World. True story, if incomplete.

Wisconsin Dells is both a natural attraction and a tourist city on the Wisconsin River, attracting millions each year for the beauty of the waters flowing through sandstone and forest, and the thrills of an abundance of competing indoor and outdoor waterparks.

The Power of Photos

“Bennett is one of the main people responsible for this area becoming a tourism magnet,” said David Rambow, the site manager and obsolete photography methods expert at H.H. Bennett Studio. This Wisconsin State Historical Society site is tucked right in the middle of the touristy bluster of attractions on Broadway in downtown: Ripley’s Believe It or Not and other offbeat museums; fudge, cheese, ice cream, and saltwater taffy shops; family eateries, taverns, and sweets stores; and gifts, galleries, and game rooms.

Bennett’s war injury made a return to carpentry impossible, so when a photo studio became available, he bought it. The need to support his wife and children compelled him to make it work. But despite his skill and pioneering methods, local demand for portraits wouldn’t be enough.

“He did photography up and down the river of the Native Americans in the period, and the city people too, and made those into these 3D stereoscopic viewing cards and distributed them on passenger trains going through and in libraries throughout the Midwest and as far south as Atlanta, Georgia,” Rambow said.

His iconic 1886 photograph “Leaping the Chasm at Stand Rock” captured his son Ashley, frozen and unblurred, in space—unheard of in the days of long exposures. News of the natural beauty and boat excursions through the water-sculpted rock formations spread.

“This quickly became the honeymoon destination or the summer vacation for middle-class people. A lot of them out of Milwaukee or Chicago,” Rambow added.

I spent an hour there visiting the past in black and white and hearing the story of Bennett’s life and cutting-edge photography methods. At the end of the tour, one can pose for a tintype—an image made with chemicals on a piece of metal soaked in silver nitrate—sitting still for 13 seconds for a portrait, or moving a bit to make a ghostly image.

As a destination, the Dells remain attractive for Midwesterners, close to home. By the numbers, Wisconsin Dells certainly earns its waterpark title: More than 4 million tourists visit the city and its more than 200 waterslides. Noah’s Ark Waterpark, the nation’s largest, has a 10-story slide—where people “chicken out” the most often—and Mt. Olympus, with its faux Coliseum and massive Trojan Horse, is impossible to miss as you drive into town.

Polynesian Resort was the first of the indoor waterparks, and others followed, including Wisconsin’s largest, Kalahari Resort. These provide a backup plan for rainy days or even a reason to return in the heart of winter. Chula Vista Resort, Great Wolf Lodge, Klondike Kavern, Atlantis—the parks are often attached to fun and bustling hotels.

But the underlying beauty of the Wisconsin River, the sculpted rock, the forests, and wildlife are minutes away, and for me, the true treasure. As crazy as it may sound, Wisconsin lay at the bottom of the sea over 510 million years ago during the Cambrian period, and the sand that would become stone did so over eons. Fast forward a long, long way to human occupation. The 420-mile Wisconsin River is considered a great serpent in the lore of the Native Americans, and The Dells—the “dalles” or “narrows” according to the French explorers—is a five-mile gorge with colorful exposed sandstone and rock formations towering over the water.

Today, they are divided into the Upper and Lower Dells by a dam at what was once Kilbourn City, but is now Wisconsin Dells.

Sometime 15,000 years ago, during the last ice age, a different sort of dam protected the area. The glaciers had stopped just shy of here, and as the ice melted, it created Glacial Lake Wisconsin, over 150 feet deep and held back by the still-frozen edges. When this ice dam finally gave way, the sudden violent rush of water carved the dells in what might be considered a geological heartbeat—as opposed to the Grand Canyon which required more than 5 million years of patient erosion.

Today, “ducks,” which are repurposed amphibious military vehicles, drive right off the shore into the Lower Dells for up-close views of the rock, while boat tours explore The Narrows of the Upper Dells.

As one might expect, there is a plethora of family-style restaurants, pizza parlors, burger joints, breakfast cafés, and novelty treats. The Grateful Shed is a collection of food trucks parked in a high-ceilinged building with a full bar at the center and kids’ games along the perimeter. Moosejaw Pizza, with its fleet of delivery cars with moose sprawled atop, has a massive wood-lodge appeal, and Dells Brewing is its own distinguished craft brewery within.

The Grateful Shed brings several food trucks with varying cuisine into a high-ceilinged building. Games occupy the kids, a bar at the center serves adults, and the food-court style seating allows everyone to order the style of food they want in one place. Oh, and there’s an old Greyhound bus on a mezzanine level that has been converted to booths.

An old Wisconsin tradition, however, is the Supper Club experience. One of the most famous in the entire state is Ishnala, from a Ho-Chunk word for “by itself alone.” According to Ron Faiola’s “Wisconsin Supper Clubs: An Old-Fashioned Experience,” a 19th-century Native American trading post first operated here before the Coleman family bought it and turned it into a family home in 1909. In 1953, enterprising war veteran brothers converted it into a restaurant on a sandstone bluff overlooking Mirror Lake, while keeping elements of the original structures. Bob Prosser, the current owner, started as a busboy here in 1973.

Ishnala brings together dry-aged steaks and seafood with Brandy Old Fashioned cocktails. Waits can be north of two hours but fans and first-timers just order a drink at the bar and settle in for it—a common practice at Wisconsin supper clubs—because it’s an experience like no other.

The area is known for conservation efforts. Two state parks are minutes away—Mirror Lake, formed by a dam on another gorge on a tributary of the Wisconsin, and Rocky Arbor, the dried bed of a former bit of river that now resembles something out of Jurassic Park. Both offer camping and hiking. Naturalist Aldo Leopold’s old chicken coop is near here along the river, a great spot to see the sandhill crane migration late in the year. John Muir grew up on a farm just east of here. And in 1971, two Cornell students, George Archibald and Ronald Sauey, founded the International Crane Foundation in a farm field rented for a dollar a year.

All 15 of the world’s species of the elegant crane are represented in spacious enclosures, some open to the skies, some even open to visitors (who can sit along benches across a small pond from the rare whooping cranes in one of them). A visit here is a must.

Even the staff comes out for breaks when a workday gets hectic. When the cranes make their trumpeting call or a warning call of a hawk overhead, all human heads turn throughout the park. On a lucky day, one of the pairs may perform their courting dance. Abundant signage offers good education for an hour, but it is not only for the birdwatchers among us.

“People come here when they are a little watered out. They just want to have a quiet, reflective time,” said Pamela Seelman, the center’s director of marketing communications. Hiking trails wind through the verdant 240-acre property.

So while many are those who soak and slide to their heart’s content amid the wonderland of the nation’s waterpark mecca, those who answer the call of the wild will find much to love here as well.