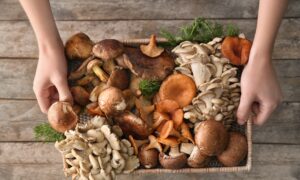 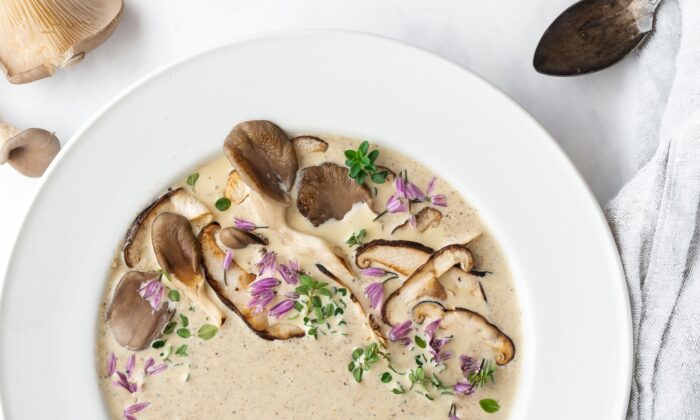 Wild About Mushrooms: Foraging and Cooking With Fall’s Hidden Treasures

As summer’s sunny days yield to the darkened cold of autumn, forests pop with wild mushrooms. Autumn rains dampen the dense substrate of soil, spent fir needles, and fallen trees that provide the perfect environment for some of the most delicious treasures you can find.

Mushrooms may look like singular bodies popping up from the surface of the soil, but there’s more to them than meets the eye. The fruiting bodies that you see actually grow from a complex expanse of tendrils, known as the mycelium, that rests hidden within the soil and other debris on the forest floor. From there, mushrooms, both edible and otherwise, perform a vital role in forest ecosystems.

There are about 10,000 named species of mushrooms that grow wild in North America, and they vary by region and season. Most are edible, and a few, such as the golden-colored chanterelle or cinnamon-capped bolete, are particularly prized for their culinary value.

The Allure of Foraging

For wild mushroom lovers, the call to the woods is irresistible. There’s a wildness to venturing into the forest to forage and a thrill to finding a treasured cache of mushrooms to cook into risottos, soups, and stews.

Mushrooming also provides an element of reconnection to nature, the season, and the old ways, when food was harder to come by and took both knowledge and skill to procure. In many cultures, foraging sustained generation after generation during the leanest years. It provided a ready, free source of nutrition and often medicine as well. Many wild mushrooms, such as the turkey tail or hen of the woods, are cherished for their immune-supportive qualities or for their ability to promote longevity.

Older generations taught mushroom identification techniques to their children and grandchildren, but as food became more easily available and affordable and many modern families moved away from intergenerational living, this passage of knowledge has waned. Now, however, new mycophiles are recovering that knowledge through online communities or local mushrooming groups.

While a very small percentage of known mushroom species are toxic, they can still pose risks, ranging from digestive discomfort to death. According to the National Poison Data System, about 40 people each year experience serious harm from consuming toxic mushrooms in the United States, including an average of about 3 fatalities per year. The risk is relatively low, but it’s important to exercise both caution and sound judgment when mushrooming.

A good first step is to learn to identify mushrooms that grow in your region, including where and when they grow, and whether they have any toxic lookalikes. Local mushrooming clubs are a great resource. These clubs often hold educational events and mushrooming forays to help beginners become more familiar with safe and sustainable foraging. In addition, a regional mushroom guidebook is an invaluable tool for both novices and experts.

When you venture into the woods to mushroom for the first time, only pick those mushrooms that you can confidently identify and know to be edible. Avoid undesirable edibles, especially those that are mealy or riddled with bugs. Practice sustainable harvesting methods by picking no more than 30 percent of a patch and only what you need and can practically use. When mushrooming on public lands, first verify whether harvesting mushrooms is legal, as well as how much you’re permitted to take. County and national park or forest service resources can provide you with detailed information about your area.

Like domestic mushrooms, wild mushrooms are best stored in a porous bag that allows free airflow. This will prevent them from becoming soggy under plastic. Brush the dirt off them with a pastry brush before preparing them, and cook them within about 5 days of harvest. Remember to always cook mushrooms thoroughly before eating them, and try a small amount first before eating a larger quantity.

How to Use Them

Wild mushrooms are delicious, and their flavors can vary widely. Among the most popular is the chanterelle, which has a trumpet-like shape and a vivid yellow color. It smells vaguely of apricots and has a citrusy quality when cooked. Boletes have a brown-colored cap that ranges from a pale faun to a ruddy cinnamon, and they’re easily dried. They’re also delicious sautéed or cooked into soups and stews. You might also know them by the French term, cep, or the Italian term, porcini, which is more widely used in culinary circles. Lobster mushrooms and oyster mushrooms taste reminiscent of the sea.

If you don’t have time to forage mushrooms for yourself, you can often find fresh wild mushrooms as well as domestic varieties at farmers markets, gourmet grocers, and some supermarkets during the fall. In addition, online retailers such as Earthy Delights (Earthy.com) or Marx Foods (MarxFoods.com) will ship wild mushrooms to your door. Dried mushrooms are available year-round from specialty shops.

Jennifer McGruther
Follow
Jennifer McGruther, NTP, is a nutritional therapy practitioner, herbalist, and the author of three cookbooks, including “Vibrant Botanicals.” She’s also the creator of NourishedKitchen.com, a website that celebrates traditional foodways, herbal remedies, and fermentation. She teaches workshops on natural foods and herbalism, and currently lives in the Pacific Northwest.
TOP NEWS