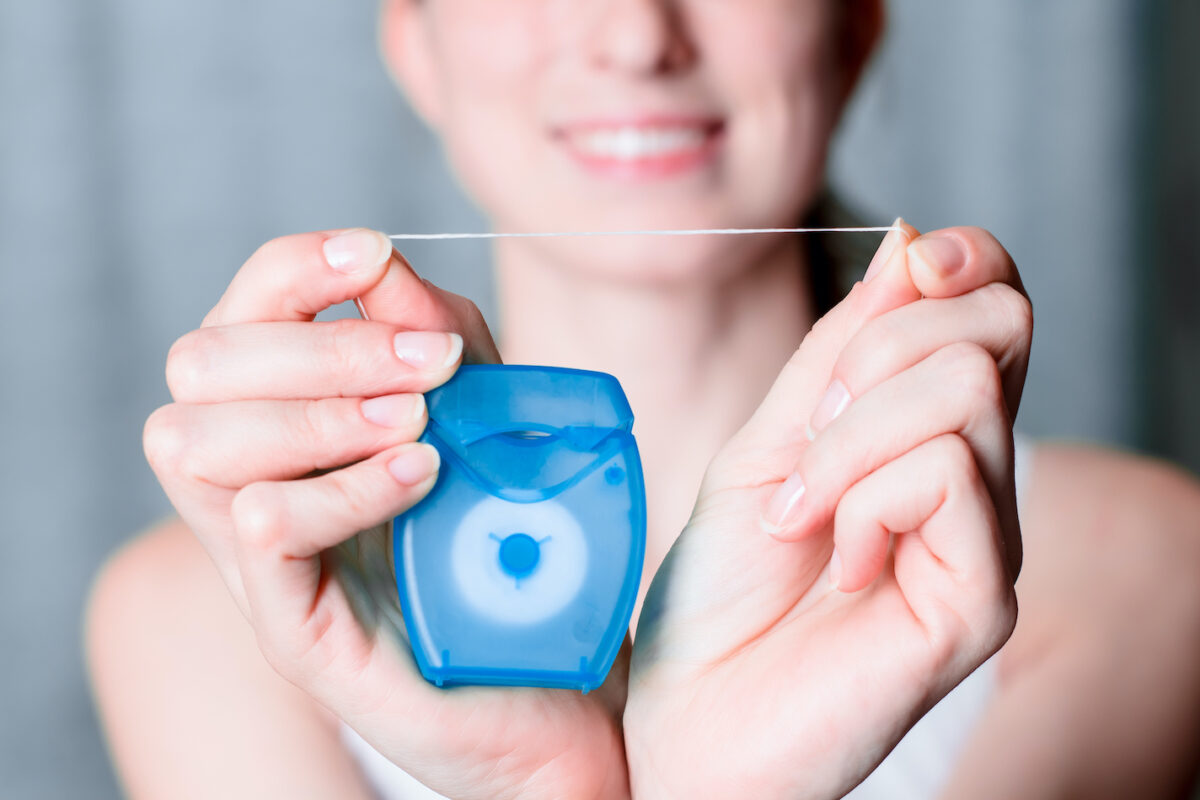 When you hug the tooth with the floss and floss gently you cause less damage to your gums.(funnyangel/Shutterstock)
Oral and Tooth Health

Why You Might Want to Quit Flossing Your Teeth

There is a right way to floss, but few people do it, and an even healthier alternative exists
BY Jennifer Margulis TIMEApril 24, 2022 PRINT

When she was in her mid-50s, my mother had a dentist who told her that if she didn’t floss her teeth, they would fall out of her mouth and she would have to get dentures. After his warning, flossing became something of an obsession.

“Don’t forget to floss” is a reminder you’ve heard a thousand times.

It sounds like very good advice indeed. After all, flossing helps remove bits of food from between your teeth. In addition, it removes dental plaque. We all know that plaque is bad. That soft sticky film that makes you feel like your teeth are wearing socks is actually the acidic waste product of the bacteria that live in your mouth. The problem is that plaque can build up, harden, and lead to tooth decay and other oral health problems.

So you should floss your teeth every day, once or twice a day, or even after every meal. That’s what health-conscious people do, right?

Not so fast. It turns out that the conventional wisdom to floss daily may not be the best choice.

Flossing Can Hurt Your Gums

There are delicate connections between your gums and the teeth that you’re separating when you floss. Aggressive flossing disconnects the gums from the teeth, which can actually cause gum recession.

Flossing too roughly or too often can also cause excess gum irritation. Technique matters.

“A lot of patients don’t know the proper way of flossing,” Karla Solis, a holistic-minded biological dentist based in Los Angeles, California, wrote in a 2016 article in MindBodyGreen. “Even when I try to teach them in the chair, they tend to just insert the floss up and down instead of hugging the tooth with it.”

When you hug the tooth with the floss and floss gently, you cause less damage to your gums. In contrast, inserting the floss straight between each tooth—which is the way I learned to floss as a child—can cause gum irritation, gum recession, and even micro tears in your gums.

Another problem with flossing is the floss itself. Even if you use only natural beauty products, avoid synthetic perfumes, and eat a healthy diet of whole foods and colorful, organically grown vegetables, you may not realize that conventional dental floss is full of toxins.

Some floss is made with non-stick chemicals. This non-stick surface helps the floss glide smoothly between your teeth. While non-stick floss makes flossing easier, Teflon dental flosses contain polytetrafluoroethylene. Polytetrafluoroethylene is a synthetic polymer. This common consumer plastic has been associated with a host of health problems, including endocrine disruption and obesity.

A 2019 study published in the Journal of Exposure Science & Environmental Epidemiology, found that women who flossed with Oral-B Glide had higher levels of problematic chemicals in their blood than women who didn’t use that brand of floss.

Using dental floss that contains these chemicals puts you at higher risk of health problems, including liver and kidney damage and immune disruption, according to data from the Centers for Disease Control and Prevention (CDC).

But what about other forms of dental floss? These may be problematic as well. Most nylon and silk flosses are coated with petroleum-derived so-called food-grade wax.

While many conventional consumer products contain petroleum-derived ingredients, petroleum-based products have been found to be contaminated with benzene, a dangerous carcinogen which can cause leukemia, central nervous system defects, and damage to reproductive organs, even at very low levels.

According to the CDC, both short- and long-term benzene exposure can compromise your health.

Some conventional dental floss is made with artificial colorants and either artificial or “natural” flavoring. The exact chemicals in these flavorings are considered proprietary and aren’t disclosed to consumers, so it’s impossible to be sure what they’re made of. That said, they likely include parabens and other potentially toxic ingredients.

You can look for non-toxic, eco-friendly, biodegradable dental floss that is unwaxed or is made with a non-petroleum-derived wax, or you can skip flossing altogether and care for your teeth in a different way.

One of the best alternatives to flossing is to orally irrigate your teeth. Oral irrigation is a fancy way of describing using pressurized water to clean in between your teeth. You can buy a standing unit for the sink or a hand-held water pick that you use like a toothbrush over the sink or in the shower. These cost more upfront than a roll of floss, but they save you money in the long run.

While conventional dental wisdom scowls at the idea that oral irrigation is as effective as flossing—and I’m sure the blood pressure is rising in a dentist reading this article right now—consider this: A study published in 2005 by a team of dentists in Nebraska concluded that both methods were equally effective for removing plaque and reducing gum inflammation and gum disease.

Another study, published in The Journal of Clinical Dentistry in 2013, found that water flossing was more effective at removing plaque than string flossing after just one session.

I lived and worked in Niger in West Africa in the early 1990s and again from 2006 to 2007. Even though Niger is one of the poorest countries in the world and dentists are few and far between, the people there have remarkably healthy teeth. Most Nigeriens use sticks of a plant called “neem” to clean their teeth. Neem is a tree in the mahogany family, native to India and West Africa.

You chew the stick until it shreds into bristles, and then rub it over your teeth, essentially using a natural toothbrush without toothpaste. I found the sticks to have a clean pine resin flavor that took a little getting used to. It’s my understanding that neem twigs are used in many countries in Africa, as well as in India and other countries in Southeast Asia.

There’s some interesting science that shows that the neem plant is helpful with oral hygiene. A 2017 study published in the journal Diabetes Research and Clinical Practice found that neem sticks are anti-bacterial. Chewing a stick for just 10 minutes per day greatly reduced harmful bacteria in the oral microbiome.

A 2020 double-blind placebo-controlled study, also conducted by Indian scientists, found that neem also had a positive effect on the insulin levels and systemic inflammation of the diabetics who took it.

And using licorice root may do even more than that. In a 2012 study published in the Journal of Natural Products, scientists found that licorice root, a staple in traditional Chinese medicine, helped inhibit the overgrowth of harmful mouth bacteria, which may in turn help prevent and treat gum disease and tooth decay.