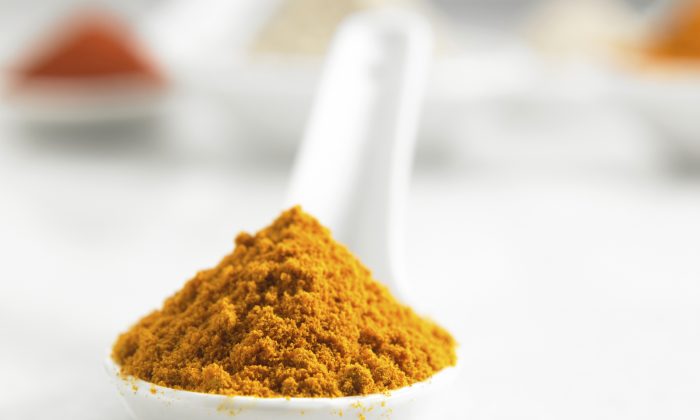 Why Turmeric May Be the Vegetarian’s Best Friend

The world’s most extensively researched spice continues to prove itself capable of remarkable therapeutic properties, with the latest study showing it may compensate for one of the plant-based diet’s most heavily debated shortcomings: DHA omega-3 fatty acid deficiency.

A fascinating new study on the golden-hued polyphenol found in turmeric root known as curcumin reveals a new mechanism by which this extensively studied phytocompound may alleviate cognitive disorders, especially in vegetarians and vegans.

In the National Institutes of Health funded study titled, “Curcumin boosts DHA in the brain: Implications for the prevention of anxiety disorders,” researchers found that curcumin enhances the biosynthesis of the essential fatty acid docosahexaenoic acid (DHA) in the rat brain. DHA deficiency is quite common and can have a wide range of adverse consequences to the optimal functioning of the brain. If this animal study’s results are applicable to human physiology and metabolism, it may contribute significantly to validating the role of vegetarianism or a more plant-centric diet in human nutrition.

Mammals must either consume DHA from animal sources or synthesize it from plant-based omega-3 fatty acid precursors, as commonly found in flaxseed, walnuts and chia seeds.

Mammals must either consume DHA from animal sources (e.g. wild fish, grass fed meat) or synthesize it from plant-based omega-3 fatty acid precursors such as α-linolenic acid, as commonly found in flaxseed, walnuts and chia seeds. DHA synthesis occurs primarily in the liver, with the brain capable of producing only a limited quantity. Vegetarians and vegans generally have reduced blood plasma levels of DHA compared to omnivores. And yet, despite the low levels of DHA in a plant-based diet the researchers pointed out: “[M]any populations thrive on an entirely plant based diet and are able to obtain adequate levels of DHA to support cognitive development and plasticity.” Because of this seeming contradiction the researchers hypothesized that other food components in the vegetarian diet “might enhance the conversion of DHA from n-3 precursors.” They also noted that animal studies showing cognitive impairment associated with DHA deficiency is not congruent with human data reporting the normal cognitive abilities of vegetarians. This discrepancy lead them to conduct their investigation with the purpose of determining “whether components commonly consumed in traditional vegetarian diets could enhance DHA content in the brain and the synthesis of DHA from plant-based sources.”

They concluded their study with the following summary:

The researchers pointed out that the observed curcumin-induced increases in DHA levels may be an indirect result of reduced oxidative stress and anti-inflammatory properties of curcumin:

Do Vegetarians Get Enough Protein? (Video)

This study has significant implications for the ongoing debate between those in the ancestral nutrition (e.g. Paleo diet) versus plant-based (e.g. vegan) philosophical camps. According to prevalent beliefs regarding our recent evolutionary history as hunter-and-gatherers, interrupted only 10,000 years ago during the transition from the Paleolithic (Stone Age) to Neolithic cultural modes, we require a certain amount and type of animal food in order thrive. If this new research is found to be relevant to human nutrition, our suboptimal genetic potential to convert plant derived omega-3 fats to DHA may be mitigated or compensated for with the use of special ‘plant allies’ such as turmeric. Indeed, a growing body of research now indicates that many of our supposed genetic limitations are compensated for epigenetically through microbes in our body that help us to generate vitamins, fatty acids, enzymes, immune compounds, neurotransmitters, etc., which our eukaryotic cells alone are incapable of meeting the sufficient demand for. Ultimately, this research sheds light on just how little we still know about our metabolic needs and capabilities and the profound complementarity and dialog that occurs between the animal and plant kingdoms in the realm of nutrition – a field of study still in its infancy.