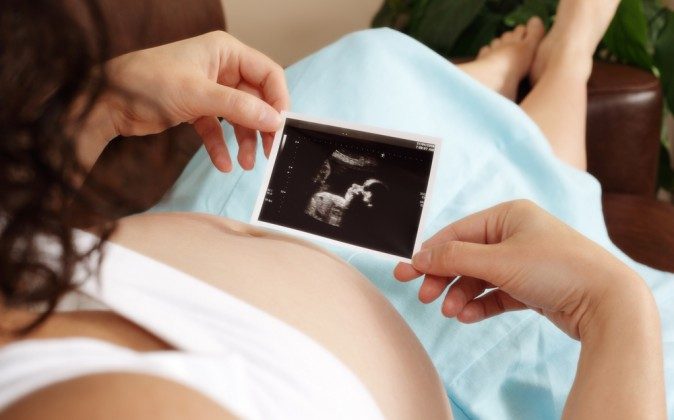 Why Should We Offer Screening for Down Syndrome Anyway?

The details of a surrogacy case involving an Australian couple commissioning a pregnancy in Thailand have created outrage in all sorts of quarters. But the father’s admission that he would have asked the surrogate mother to terminate her pregnancy if he’d known baby Gammy had Down syndrome didn’t cause indignation in anywhere the same scale.

The notion of disability – and how we value or devalue people with it – makes many uncomfortable. Nevertheless, the screening most pregnant women choose to determine whether their child will have Down syndrome, and the terminations that result from it, are widely practised.

At around 12 weeks gestation, a woman may elect to have a combined screening test involving an ultrasound and a blood test. The results from these investigations provide a probability of the fetus having one of a few chromosomal trisomy conditions.

These conditions result from having three copies of a chromosome, rather than the usual two. They can be lethal in utero or lead to a very short life (such as with trisomy 18, known as Edwards syndrome and trisomy 13, known as Patau syndrome), or a spectrum of mild to significant intellectual disability, often presenting with cardiac problems (trisomy 21 – Down syndrome).

Based on this probabilistic information, the woman can then decide whether she would like to obtain further, and likely more accurate, information.

At the moment, this usually involves invasively obtaining a sample from the placenta or amniotic fluid. Some women decide to have this, some do not. And some will be informed that their fetus will be born with a chromosomal trisomy.

Of these, most will terminate. We don’t know how many women do this in Australia as data is not kept in a consistent way between states. But in the United Kingdom, a 2009 paper gave the termination rate for detected cases of Down syndrome as 92%.

The ethical question is whether such screening, and ending those pregnancies where a condition is identified, is acceptable.

For the most part, pregnant women wish to remain pregnant – no matter how they came to be so. While it is one thing for a male parent of a surrogate baby to claim, after the fact, that he would have requested a termination, the actual decisions faced by pregnant women are much less frivolous.

Screening is primarily about facilitating choice through information provision; it’s not about putting women on a conveyor belt to termination.

Because our society has differing views on conditions such as Down syndrome, some couples wish to access information to inform their decision-making in pregnancy.

Some wish to have this information to help adjust to life with a child who has a disability; others use it to plan for birth; while others might choose to end the pregnancy and try again.

This latter decision is not necessarily borne from inherent prejudice, but a recognition that certain conditions may mean their child could have profound problems. Ending a pregnancy is not something taken lightly, whatever the circumstances.

The moral status of the fetus is an intractable issue in our society. Nevertheless, termination is possible at certain points in pregnancy and for certain reasons.

Medical grounds, such as ending a pregnancy where the fetus will be born with Down syndrome, are permitted up to a point.

Still, the acceptability of both the offer to screen for abnormalities in pregnancy, and the action taken on the basis of its results should not detract from several important considerations.

First, women or couples must make a choice about screening and potential termination with access to full and balanced information. There’s some evidence to suggest women don’t always have enough knowledge to make an informed choice. It must also be made clear that undergoing any test is a choice, not an expectation.

Second, women need to have time to think about their choices, which are often difficult and made under an inherent time pressure.

Third, we must not use screening as an excuse for withdrawing practical or psychological support for people who choose to continue a pregnancy that will lead to the birth of a child with a genetic or congenital condition.

Finally, we need to appreciate that although these decisions are made by women and couples based on their individual values, the social context in which they are made is also important. Conditions such as Down syndrome can lead to significant and profound problems, but they don’t always.

We must talk about our attitudes to disability and how we make choices about it. And we should aim for a society that recognises and supports all forms of ability and encourages discussion about our choices.

Ainsley Newson has previously received funding from the UK National Institute of Health Research for research into ethics and prenatal screening and diagnosis. Ainsley is a member of the NSW Health Clinical Ethics Advisory Committee and the Ethics and Social Issues Committee of the Human Genetics Society of Australasia. This article was originally published on The Conversation. Read the original article.

*Image of “ultrasound” via Shutterstock