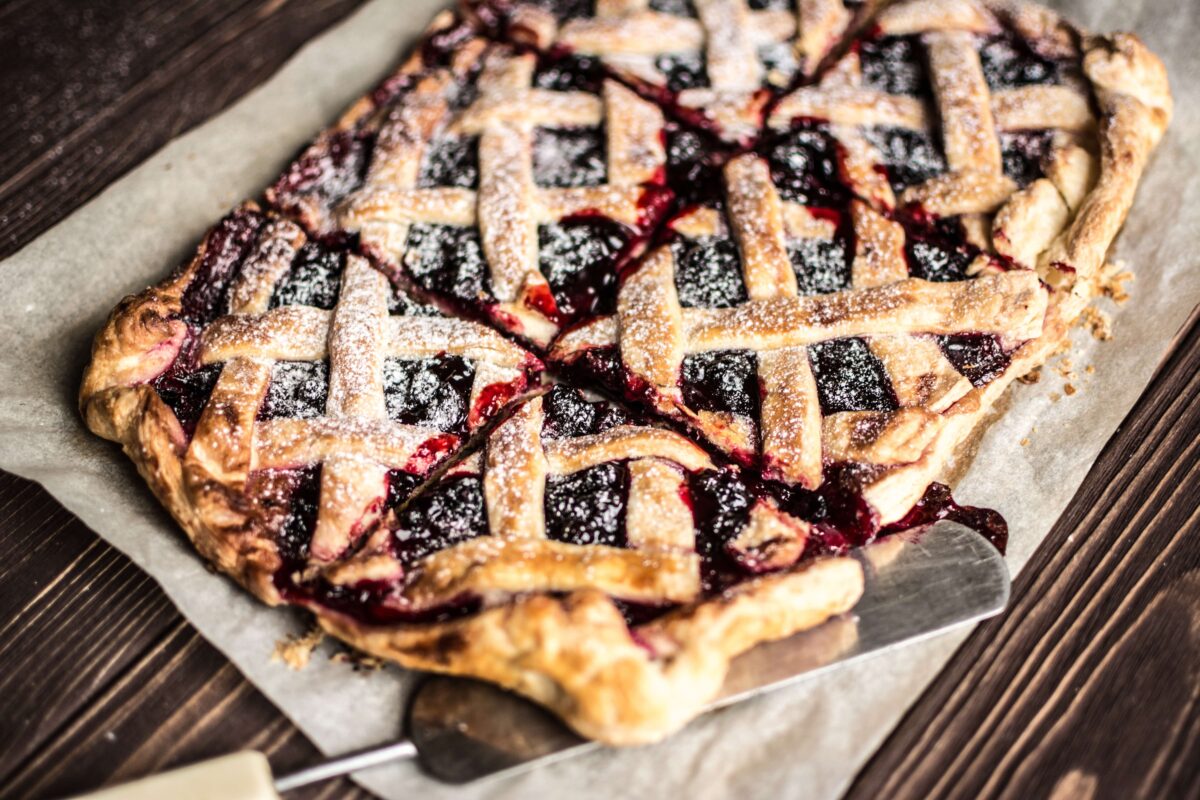 Why Marionberries Are the Celebrated Icons of the Pacific Northwest

Why the unique blackberry is celebrated in restaurant and home kitchens throughout the Pacific Northwest
BY Eric Lucas TIMEMay 12, 2022 PRINT

Everybody loves marionberries. Everybody.

Though that may seem a bit grandiose, in the 20 years that I have offered anyone a marionberry anything, I’ve never heard a negative, or even humdrum, reaction.

And so on. Among family and friends and virtually all guests at my farm, marionberry pie wins the gold medal. This icon of the Pacific Northwest—born and bred here, at Oregon State University in the Willamette Valley—is featured across the region and down the West Coast in ice cream, muffins, pancakes, jams, pies, tarts, sauces, syrups, marinades, crisps, cobblers, sodas, galettes, scones, and more. The plants are robust: production prodigious, reliability high.

When I say everybody loves them, I mean that: One morning, I strolled out to my garden to find a fat and happy raccoon perched on top of the marionberry trellis, reaching down to snag ripe berries. Ironically, we had named this raccoon “Barry.” He’s not a problem anymore, as we now have an energetic Weimaraner puppy, and he loves marionberries, too… just as he loves chasing raccoons.

But what’s so special about this simple berry that makes canines, raccoons, and humans of all stripes adore it?

First of all… ain’t simple. The color, flavor, and aroma of a ripe marionberry are complex and multi-layered. The color seems a plain black until you look close and discover it’s a shimmering indigo, like the predawn sky that hints at what’s to come. Cooked up, that indigo brightens into a vivid Titian magenta; luckily, it launders out easily, because stains are inevitable.

The aroma is a spicy tang, like the sweet smoke from a juniper fire. The texture is firm: Stick them in your fridge for a few days and they hold up fine. And the flavor is an intense sweet-sour with hints of plum, clove, cherry, and rhubarb. An ephemeral, coppery aftertaste adds depth. I’d say marionberry pies and tarts are the most highly flavored pastries of all.

This gem of flavor, robustness, and utility—the “Cabernet of berries”—represents a triumph of American horticulture. The art of breeding new plants is an ancient human endeavor, but it was given methodical shape and direction in northern California 150 years ago by Luther Burbank, who created more than 800 plant varieties in the process of revolutionizing commercial agriculture. His disciples took up the mantle at state agricultural universities across the country; most new plant introductions in the 20th century came from ag colleges in collaboration with the federal Department of Agriculture. The marionberry arose in the postwar boom of American enterprise, in 1946, when Oregon State College horticulturist George Waldo set out to breed a better commercial blackberry by crossing two existing cultivars, Chehalem and Olallie—the former small but flavorful, the latter big but insipid.

But its heritage is not as plain as simply crossing two cultivars. The marionberry family tree resembles the House of Tudor, which produced its most famous monarch, Elizabeth I, in its final lineage. Himalayan blackberries, dewberries (wild trailing blackberries), boysenberries, raspberries, loganberries, youngberries, pacific blackberries—all are in the Marion’s genetic background. Today, the marionberry is the leading type of blackberry in commercial cultivation: more than 30 million pounds a year, virtually all of that in Oregon.

The marionberry’s homeland is itself an earthly treasure. The volcanic cones of the Cascade mountains rise to the east, spilling brawny rivers through deep forests to the Willamette bottomlands, where deep soils nurture ancient firs and rowdy, head-high grasses. Oak-clad hills line both sides of the valley, and strands of Pacific cloud grace the high horizon. The air is scented with oak must, earth mold, and distant snow. Summer light rides the far northwest sky until 10 p.m., and winter mists linger among the oaks and firs. Aside from berries, the valley is known for hazelnuts, grass seed, and world-class Pinot Noir.

George Waldo started testing his new berry here in 1948 in the fields of Marion County—thus the name (technically, “Marion blackberry”). “Marion is a new blackberry that shows promise of meeting some needs of Oregon’s small fruit industry not fully met by the most widely grown blackberry varieties,” wrote Waldo in his understated 1957 pamphlet introducing the Marion to the Oregon farm industry. His report judged the flavor good, marketability also good, usefulness fine, and the Marion “very desirable for ice cream flavoring.”

As with so much that’s fine in this world, there are dues to pay for marionberry treasure. Buy them in a store or farmers market and they are dear indeed—I saw $8 a pint last summer at a farmers market, which fits Waldo’s marketability assessment. That would run the cost of a full-bore pie up to $30 or so (roughly what you’d pay at a good bakery, anyhow).

If you want to grow them yourself, that’s easy—to start. Plant the potted starts or bare roots, provide a framework for the canes, and stand back. Given ample water and rich ground, the first year’s canes reach 6 to 8 feet and, since marionberry vines flower and bear fruit in their second summer, will give you a few pints of berries about 15 months after planting. Then, things really get going: In the second year, new canes can reach 20 feet—every year after that, up to 30 feet. Commercial growers usually top them off at 6 feet or so, for ease of picking. I tie mine along wires at a height of 5 feet and make lavish use of the entire 20-foot cane.

Once established, production is astounding: From my 40 feet of marionberry row, last summer I harvested about 10 gallons (50 pounds), of which half went in the freezer for winter use and a third were simply eaten out of hand. The remainder made their way into pies—four of them. One acre of commercial marionberry vines in Oregon produces 6 tons of berries, which, by my rough reckoning, yields about 6,000 pies. Take that, Hostess Twinkies.

It grows best here because it prefers our mild climate and is shy of great heat and cold—though at my farm, I’ve seen them grow in 101 F and 10 F weather in the past year, no harm done.

So what’s the catch? Wicked thorns. Handling the vines requires thick leather gloves; but even so, some thorns slip through. Picking cannot be done with gloves, so to harvest this treasure, all but the most cautious will come away with berry needles in their fingertips. And every winter, one must cut away the spent, two-year canes to make room for the new second-year canes, and the next summer’s first-year growth. Yep, it takes work.

“He that dares not grasp the thorn, should never crave the rose,” said poet Anne Bronte. Marionberries are the Valentine roses of the berry world, and well worth the grasp, even if it’s just dollars.

Marionberries are common in July and August at temperate-climate farmers markets, and they can be found frozen at many mainstream grocery stores, includ- ing Whole Foods, Wild Oats—even Albertson’s and Safeway. You can also order online at, among other vendors, Washington’s Remlinger Farms and Oregon’s Stahlbush Island Farms.

Is frozen as good as fresh? Well, never. But marionberries come as close to it as any foodstuff. Add a little extra thickening to the pie, and the differ- ence between a fresh or frozen berry pie is negligible. And frozen berries, once thawed, are better for making juice to use in ice cream and sorbet, if you find a pie unworthy.

This is the pie we serve at my small farm on San Juan Island in Washington. My mother-in-law adapted a 1970 Betty Crocker pie crust recipe, and I then amended it for a pie fit for marionberries.

In a large mixing bowl, add vegetable oil to flour, stir- ring with a whisk or fork until you have pea-sized pieces. Slowly add chilled water until the dough coalesces; divide and shape by hand into two equal halves. Roll out each half on wax paper. Then, carefully lay one dough round into a 10-inch pie dish, or deep 9-inch dish.

Meanwhile, mix marionberries with sugar and thickener (if frozen, thaw thoroughly first and use more thickener) and pour into the pie dish. Do not over-sweeten, or you’ll over- whelm the marionberry taste. Lay the other dough round over it, press two edges together, and use a fork to poke holes on top for the juices to drain if necessary (or form a lattice crust, if desired).

Place in a 425-degree oven and bake for 20 to 25 minutes; turn heat down to 350 degrees, and bake for another 40 to 50 minutes. The pie is done when juices bubble up through fork holes in the crust. Cool for 2 to 3 hours and serve.