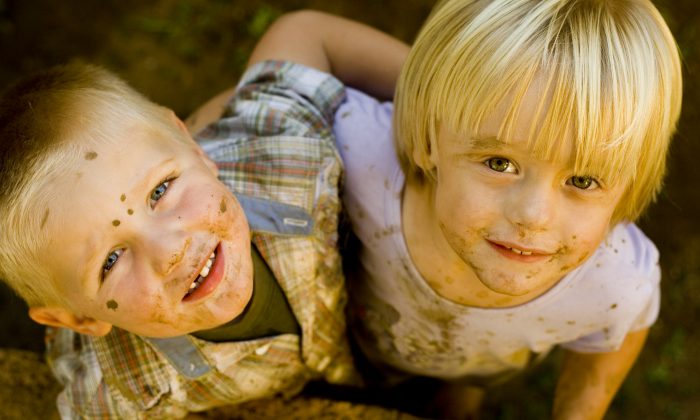 Environmental exposure to a variety of microbes helps us develop a robust immune response as we age. (Philip Meyer/Shutterstock)
Mind & Body

Why Getting Dirty Is Good for Your Health

When I think of my childhood, I think first of all the hours I spent playing in the dirt. There was nothing better than upending rocks to look for salamanders, wading into skanky ponds with the hope of nabbing a turtle, or crouching at creek’s edge catching minnows. I spent hours on end fascinated and grimy.

While my parents might not have loved how dirty I became (I could leave an impressive bathtub ring), my time rooting around in the dirt may have been good for my health. Your well-being is connected to the microbes you carry on and in your body, and the greater variety that you are exposed to, especially as a child, the better the odds that you will be healthy as an adult.

Your body is host to billions of microbes that live not only on your skin, but also in your mouth, gut, nose, and pretty much everywhere else. These microbes form colonies called microbiota, a topic that scientists are only now beginning to understand. What they do know, however, is that human life needs these “bugs” for our very survival.

Exposure to a lot of different bugs teaches our immune system to discern between the good, bad, and the harmless.

At issue now, however, is that while I grew up in an environment where I could explore these wild habitats, more and more kids today are raised in urban or suburban communities without exposure to a broad variety of microbes—essentially, to dirt—which helps us develop optimal immunity. Exposure to a lot of different bugs teaches our immune system to discern between the good, the bad, and the harmless. Scientists are finding that the result of this loss of exposure is an increased incidence of allergies, asthma, digestive problems, food sensitivities, and other immune-related illnesses.

Along this same line, in Chinese medicine, what doesn’t make you sick makes you stronger. And what makes you sick according to this medicine includes a whole host of lifestyle factors, such as stress, overworking, and eating improperly. In Chinese medicine, parasites, unclean food, and pathogens like microbes, viruses, and bacteria may foretell an illness but are not the definitive cause.

According to Chinese medicine, you are able to resist many of these pathogens when your protective energy (called “wei qi”) is strong. Much like immunity, when you are strong and healthy, your body can fight off invading illnesses. When you become run down or stressed, your energy takes a hit, your protective barrier becomes weak, and you get a cold, the flu, allergies, or some other illness.

This is why Chinese medicine, and other broad-minded forms of medicine, focus on strengthening individual immunity rather than simply attacking illness.

So, according to Chinese medicine, the way to maintain your health and immunity is to maintain your energy. This means eating the right foods in the right amounts, getting enough sleep, balancing work with rest, managing your stress, and exercising moderately.

In addition, because much of Chinese medicine is based on patterns in nature, connecting with the natural world is a good way to not only enhance your spiritual health, but also to gain more exposure to the microbial world. Here are a few simple ways to do that—for you and the children in your life.

Go outside and play. Ideally in a park or in a wild space. Running, hiding, touching the ground, and getting dirty are good ways to get in touch with some bugs, big and small.

Pick fruit, especially in the wild. As a kid, we had blueberry bushes growing along our driveway. Filling up a bucket of blues involved contact with lots of wild things, even though it was in our front yard.

Grow a garden. Flowers or vegetables; either will get you and your kids in touch with the soil. The upside to growing vegetables is that you’re also growing food that will affect your intestinal microbes—in a good way.

Explore the natural world. The options are endless: checking out wildflowers in the spring, studying minnows in a nearby creek, exploring pond ecology, or hiking in the woods. Don’t be afraid to touch and examine.

Avoid the things that kill off the good bugs on and inside your body. Consider antibiotic use only as a last resort, and be mindful of antibacterial hand soaps and sanitizers. And remember it’s OK to get a little dirty.

In fact, it may be important in an effort to ward of some illness.

“Atopy and asthma appear to have their roots in an insufficiency of early life exposure to the diverse environmental microbiota,” warns a review published in Current Opinion in Allergy and Clinical Immunology in 2017.

A similar finding was published in Perspectives in Public Health in 2016 in a review titled “Time to abandon the hygiene hypothesis.”

“Changes in lifestyle and environmental exposure, rapid urbanization, altered diet, and antibiotic use have had profound effects on the human microbiome, leading to failure of immunotolerance and increased risk of allergic disease,” it states.

It is also important to note that there is a difference in dirt quality, so to speak. There exists a vast chasm between the grime of a New York City subway station and the natural microbes of forest soil. That’s a necessary distinction amid the current pandemic.

So did spending my childhood as a gritty girl make me any healthier? I don’t know. What I do know is that I never had allergies. Never, at least until I moved from the maple and oak forests of New England to sunny Colorado. Living in the foothill shrublands of Boulder, I developed an allergy to Russian olive trees—a species I had never been exposed to as a kid. The latest research and the insight of traditional Chinese medicine suggest earlier exposure may have prevented that.

Lynn Jaffee
Follow
Lynn Jaffee is a licensed acupuncturist and the author of “Simple Steps: The Chinese Way to Better Health.” This article was originally published on AcupunctureTwinCities.com